Sharmila Rege, the scholar who described herself as a Phule-Ambedkarite feminist, died in Pune on 13 July. She had recently been diagnosed with colon cancer.

After finishing the manuscript of Against the Madness of Manu she told her students and colleagues that she could now die peacefully.

She always signed off her emails with the words of Ambedkar: “My final words of advice to you are educate, agitate and organize; have faith in yourself. With justice on our side I do not see how we can lose our battle.”

Sharmila Rege’s death in July 2013 at the young age of 48 was a shock to so many of us.  She had been a good friend, a great scholar and spokesperson for human rights, gender equality and Dalit rights — and then she was gone.  We all felt the loss.

She has been one of the few feminist scholars to prioritize the voice of Dalits. It reflected itself in her first book, Writing Caste, Writing Gender, and in her last book, Against the Madness of Manu, which took up the contributions of Ambedkar in his ideological fight against Brahmanic patriarchy. Selections from Ambedkar’s writings along with Sharmila’s introduction marked this book.

As a founder-leader of the Krantijyoti Savitribai Phule Women’s Studies Centre at Pune University (KSPWSC), she interacted with and taught generations of students, giving them a sense of a “dalit perspective.” Sharmila’s focus was the  local and oral traditions of knowledge and cultural practice, bringing them into public attention, and translation projects that build archives of importance. Sharmila was an engaged scholar in the best sense.

Sharmila’s commitment to women’s studies was extraordinary: in a world where academics hop from one university to another in pursuit of professorial positions, she actually moved ‘downwards’ from being a Professor in the Sociology Department where she was teaching between 2005 and 2008 (she was also Head of the Department at the time) to become an Associate Professor in the Women’s Studies Centre. She did that because as a committed academic she felt the need to be located at this centre to help safeguard it as the uniquely creative place that it had grown into. Everyone except a few feminists thought she was mad. Using this space she spearheaded programmes – always keeping caste as a critical index of inequality which could not be separated from issues of gender. 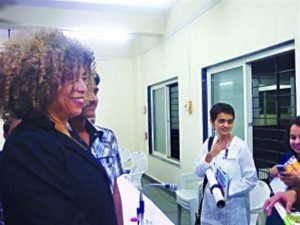 She urged the adoption of a position that moved away from what she called the ‘savarnization’ of the women’s movement and the masculinization of the dalit movement to recover the original egalitarian agendas of these movements. …I have been wondering if the cancer in our society transfers itself upon people who care.

– Uma Chakravarti is a feminist historian. This tribute was originally published in the Seminar magazine

In a hierarchical institution such as university, a scholar established in the mainstream discipline switching to a ‘lower’ position without batting an eyelid showed her commitment towards women’s studies. Under her leadership, KSPWSC  became an intellectually vibrant centre providing a platform to academicians, retired scholars, freelance researchers, social activists and feminists.

Her 2008 Savitribai Phule oration on ‘Education as Trutiya Ratna: Towards Phule-Ambedkarite Feminist Pedagogical Practice’, sponsored by NCERT, in a jam-packed hall at SNDT Women’s University, Mumbai, was inspiring, insightful and simply mind-blowing. The audience, whether they agreed with her or not, listened to her with rapt attention and many of them gave her a standing ovation.

… Sharmila was devastated at the loss of another wonderful feminist, ‪Vina Mazumdar, who died a few weeks before her. Reading a poem I had written as a tribute to Vina Mazumdar, Sharmila wrote how much she had liked it. She said: “We are going to start the semester by reading out your poem and pledging to work in the directions charted by Vinadi for all the reasons your poem maps.”

In the past few weeks we have lost both Vinadi and Sharmila. Sharmila will not be around to read the poem on Vinadi to her students, but her legacy, her work, her spirit will continue to inspire us.

– Urvashi Butalia is a feminist, historian and founder of Zubaan Books.

Except for the piece by Gail Omvedt, the rest of the tributes are extracted from In memoriam: Sharmila Rege (1964 -2013) August 15, 2013 Team FI Obituary http://feministsindia.com/tag/sharmila-rege/