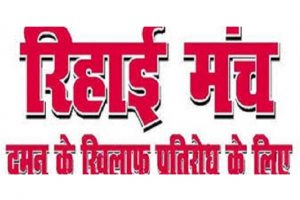 MEERUT (Uttar Pradesh): At a meeting held on 27 December, the Rihai Manch, Lucknow, demanded the immediate detention of those trying to foment communal tension in the country. The president of the Manch, Mohammad Shoaib, said that those who had performed Bhoomi Pujan at Meerut for the construction of a temple of Nathuram Godse, the assassin of the Father of the Nation Mahatma Gandhi, were traitors. The manch has asked the government to ban Hindu Mahasabha.

It also demanded that BJP MP Yogi Adityanath, who was associated with the Mahasabha, should be arrested and his organization Hindu Yuva Vahini banned. Forensic analysis had proved that the CD of his speech at Gorakhpur in 2007, which led to communal violence in eastern Uttar Pradesh, was not doctored, and his voice sample matched the voice in the CD. While noting the acquittal of the 23 youths of Maharashtra who were arrested under MCOCA on the charge of sending emails to media organizations taking responsibility for bomb blasts in Ahmedabad in 2008, the manch demanded that the police and intelligence officials who oversaw their arrest be given exemplary punishment.