It is election  season and the policies of different political parties pertaining to Dalitbahujans are under the scanner. At this point in time, it would only be appropriate if we try to analyse the contents of Rajneeti (Politics), a 2010 film  which was directed by Prakash Jha. Jha himself harbours political ambitions and is in the fray from the Betiah Lok Sabha constituency in Bihar as a JDU candidate. 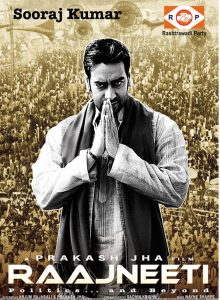 The film portrays the north Indian political scene and exposes the bloody war for domination between political clans. The film is important not only because it mirrors Indian politics but also because it reflects the realities of Indian society. But – and this is a big but – it comes with feudal overtones.

The story goes something like this: Bharati, the daughter of a political leader, swayed by Communist ideology, turns against her father and has an affair with a much older Communist worker Bhaskar Sanyal (Nasiruddin Shah). Later, she gives birth to a boy, who is thrown into the Ganga. She is married off to Chandra Pratap for political gains.

The Pratap family lives in the capital of an unspecified Hindi-speaking state. The members of the family are active in a political party called Rashtrtavadi. Bhanu Pratap, the head of the party, is trying hard to come to power. But he suddenly falls ill and a battle starts within the family to usurp his political legacy. Bhanu Pratap  hands over the reins of the party to his younger brother Chandra Pratap. However, his son, Virendra Pratap wants to assume the leadership of the party himself and opposes Chandra Pratap.

Enter Dalit-backward leader Suraj Kumar (Ajay Devgn), whose influence is growing by the day. The film superbly portrays how the Dalits and backwards have become aware of their rights and are ready to fight for them. It also shows how, in order to undermine the real leadership of the Dalits, the political establishment promotes its Dalit flunkeys.

The film is centered on two groups, which want to establish control over the party so as to come to power. In one group are Prithvi Pratap Singh (Arjun Rampal), Samar Pratap Singh (Ranbir Kapoor) and Brijlal (Nana Patekar). The other group comprises Virendra Pratap Singh (Manoj Bajpai) and Suraj Kumar. 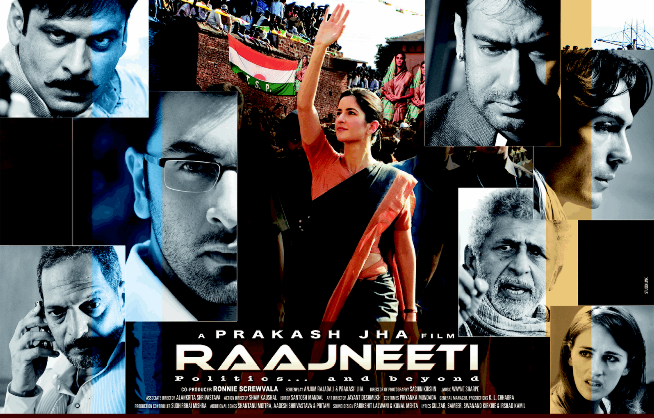 Prithvi and Samar are expelled from the party on the charge of undertaking anti-party activities. Then, Prithvi Pratap, along with his supporters, forms a new party Janshakti. In the bloody battle between Prithvi and Dhirendra that follows, Samar’s foreigner wife and Prithvi are killed. Virendra Pratap and Suraj are behind the murders. The film quite realistically portrays how political clans  take advantage of a murder in their families by telling voters to avenge the murder with votes, and dream of coming to power. The country’s political history is witness to many such instances.

When Brijlal comes to know that the Dalit, Suraj Kumar, is, in fact, the illegitimate son of Bharati, he sends her to Suraj with the mission to persuade him to join the Samar Pratap camp by making an emotional appeal to him. But Suraj is unmoved. In the end, Samar kills his political rivals Virendra Pratap and Suraj. Brijlal tells him, “Till your enemy is alive, you will suffer reverses after reverses. So, it is better to eliminate your enemy.” Spilling blood  is the only way they know to counter their political rivals. The logic is chilling: the path to success lies over the dead bodies of your political enemies.

Here, the character of Suraj typifies the caste Hindu mindset. Suraj is intelligent, he is shrewd and he has a deep understanding of the game of politics. He is popular among the Dalits and backwards and has the potential to script a major political upheaval. But at the end, he is shown to be an illegitimate offspring of a caste Hindu. This is an old habit of the caste Hindus. The implied message is hard to miss. If a Dalit-backward person rises in life, the blood of caste Hindus must be coursing through his veins. This serves two purposes: It demeans and humiliates the entire Dalitbahujan community and it dents his popularity among the Dalitbahujans.

The only problem is the feudal mindset that seems to inform the film’s script. The film-maker could well have spared Suraj and his backward community the humiliation heaped on them. Right from the Vedas and the Puranas to modern literature and films, Dalits and backwards are being demeaned. How long will the Dalitbahujans continue to face this humiliation without a murmur of protest?