Dawoodnagar is a block headquarters town in Bihar’s Aurangabad district. It is home to mainly the OBC Kasare and Patwa communities. There was a time when the making of brass vessels was a cottage industry here, but now it is primarily known for its distinct cultural identity. An OBC cultural revival is taking place here. 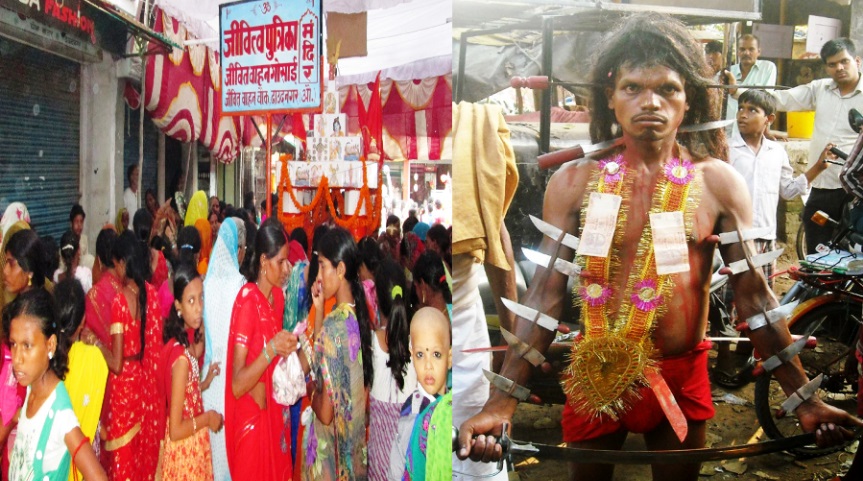 Dawoodnagar is a town of Bahujan artistes. On the second day of Ashwin in the Hindu calendar – which generally falls in the month of October – almost all residents of the city wear the disguise of different mythological and historical figures, and there are all-night concerts of Lavni and Jhumar. The artistes of this small town have perfected many an art. Some can lie still on the surface of water for hours; others get themselves stung by dozens of scorpions. Some can trick you into believing that their head has been slashed into two; others can ‘sever’ their limbs from their body. During these festivities, some residents dress up as various gods and goddesses, others as politicians to caricature them. In some places, you can see a person standing perfectly still, without even blinking his eyes, while in other places you can see artistes decked up as Buddha, Krishna or Kali. 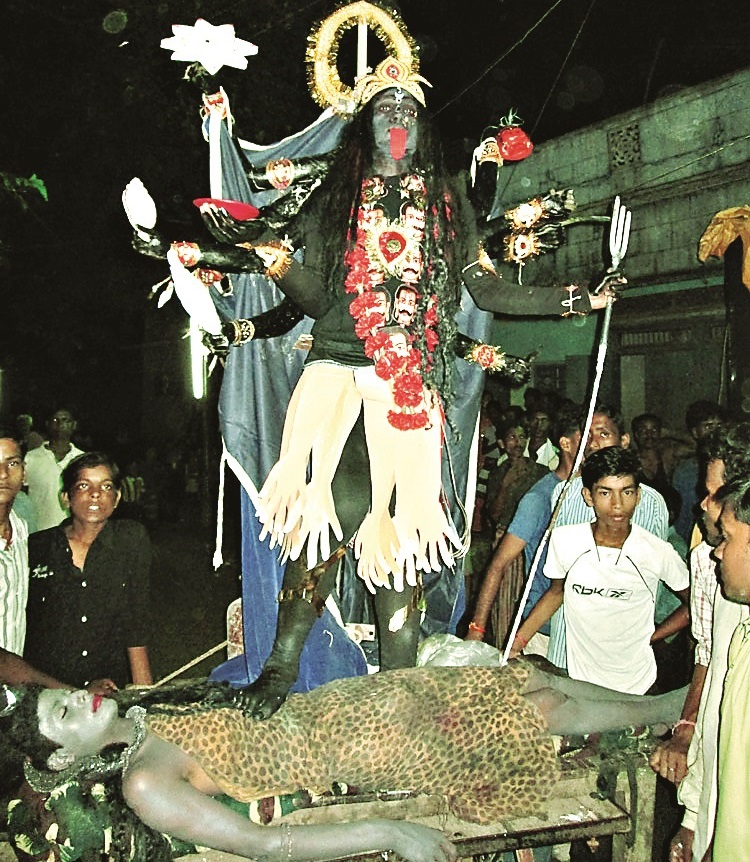 Chaudhary is one of the three artistes of Dawoodnagar who know the art of sleeping on the surface of water. He says that once, when he jumped into a canal to save a drowning child, it was as if the water was caressing him. In our presence, he lay still on water for over half-an-hour.

The folksongs of the region suggest that this festival of disguises has a long tradition. These Jhumar songs are in Magahi (a dialect of Hindi) and are based on the Lavni folksongs of Maharashtra. According to these songs, when an epidemic broke out in the area in Vikram Samvat 1917, ie 1860 AD, some mendicants from Maharashtra installed and consecrated idols of Bamma Devi in the four corners of the town, and the residents spent entire nights worshipping the goddess for a month. From that time, this festival is celebrated as Jeevit Putrika Vrat (a fast undertaken by mothers for long life of their sons) or Jiutia. Incidentally, Jivit Putrika Vrat Liye Huye (On Jivit Putrika fast), the title of a famous poem by the Sahitya Academy award winner Gyanendrapati, was inspired by this festival. The poem is a satire on poets prepared to do anything to get their indifferent poetry published. It speaks of how they sell copies of literary magazines to wriggle into the good books of the editors. 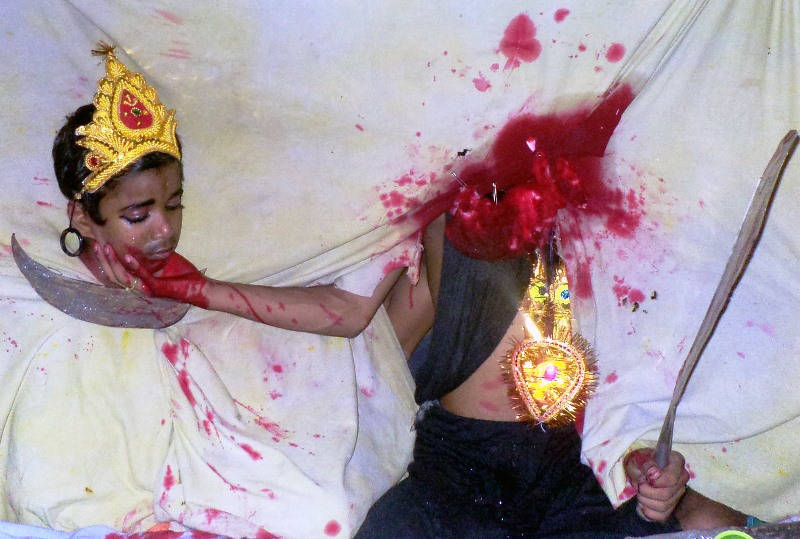 Be that as it may, Bamma Devi is most likely the local version of Maharashtra’s Mumba Devi. Satyendra, a teacher by profession and a past master in the art of disguise, says, “The mendicants might have used prayers and worship as a means to teach the villagers about the importance of hygienic living to fight the epidemic. Swang, Lavni, and such must have been used to entertain the people and keep them engaged during the all-night worship sessions. And that practice must have been preserved by Dawoodnagar as a tradition.” According to the gazetteer of the British era, epidemics broke out in many parts of the country around 1860 and the British government took many steps to control them.

Besides mythological stories, Lavni songs also chronicle tales of cultural or historical importance. For instance, a Lavni song describes in detail the construction of a canal from the Son River, including why the British decided to dig the canal, how engineers prepared the related designs, and even the width and length of the canal! 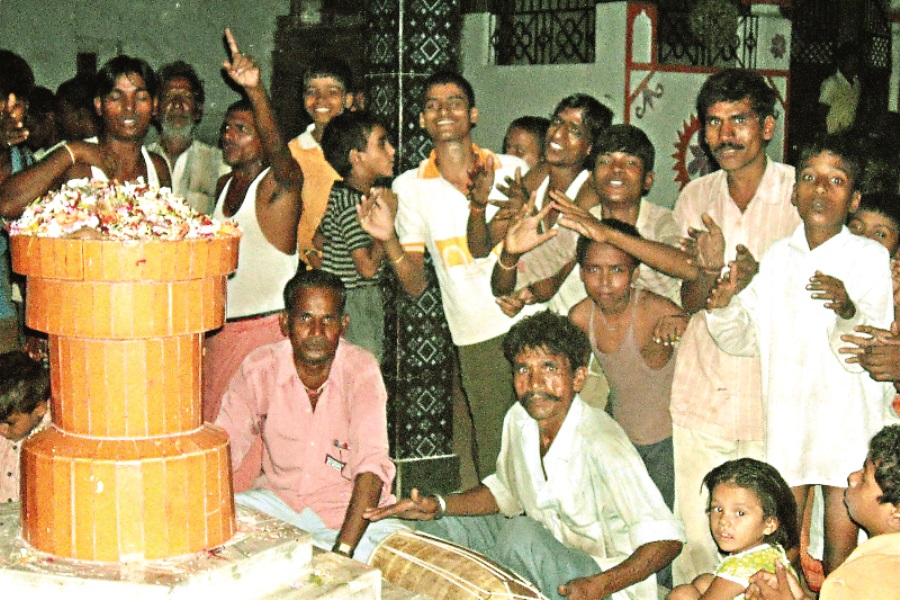 In this town devoted to art, instances of communal harmony abound. During the Jeevit Putrika Vrat, the Muslim residents also wear disguises and sing and dance. Similarly, Hindu artistes join in the celebrations of Muslim festivals. The day we reached Dawoodnagar, taziyas (miniature mausoleums carried in processions) for Moharram were being prepared under the supervision of Hindu artist Shiv Kumar. The Khalifas of the 8-9 taziyas of the town were all praise for Shiv Kumar, describing him as a symbol of communal harmony. 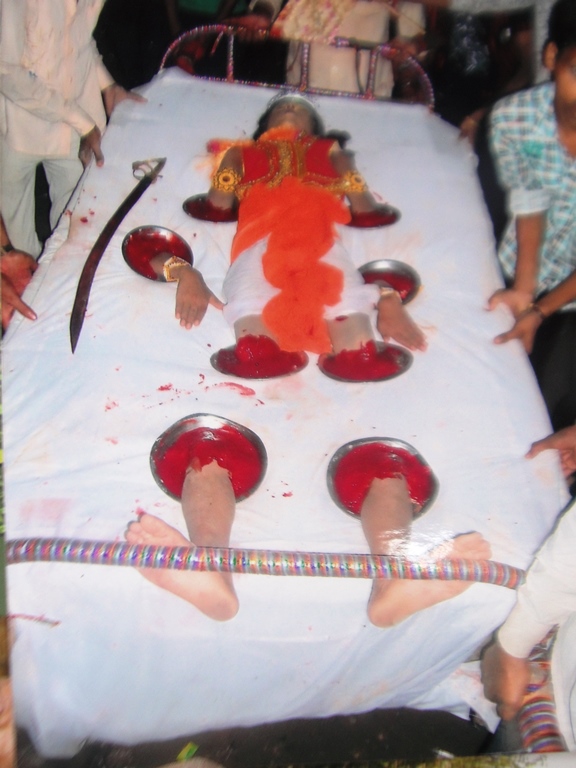 The Dawoodnagar residents also describe their town as the town of Banabhatta, the writer of Kadambari. Acharya Hazari Prasad Dwivedi, in his book Banabhatta Kee Atmakatha (Autobiography of Banabhatta), says Banabhatta was adept in theatrical skills. Dwivedi gives credit for his book to one Catherine, who, even at the age of 75,

When and who initiated a particular practice that was absorbed into the folk culture, are questions that cannot be answered with any degree of certainty. This is true of Jiutia, too. But there is a folksong which clearly indicates the beginning of the tradition. Ashwin Andharia Dooj Rahe, Samvat 1917 Ke Saal Re Jiuitia. Jiuitia Re Rope Le Haricharan, Tulsi, Damdi, Jugul, Ranglal Re Jiutia. Are Dhan Bhaag Re Jiuitia…’ (It was the second day of the dark fortnight of Ashwin month of Samvat 1917. Haricharan, Tulsi, Damdi, Jugul and Ranglal sowed the seeds of Jiuitia. It was great luck …) According to this song, five persons launched the tradition that was a societal attempt to deal with the plague epidemic. People believe that the intensity of the epidemic waned due to fasting.

Jimutvahan, who is invoked by the Bahujans during this festival, was the famous ruler of the coastal province of Odisha. His father was Sahlivahan and mother Shaibya. The king, who belonged to the Survanshi clan, is credited with having started the Saka Samvat. It is still used by astrologers. He ascended the throne in 78AD.

The credit for preserving Jiuitia folk tradition in Dawoodnagar goes to two castes: Patwa or Tanti and Kansyakar or Kasera. Besides, the Rambabu family, which is of the Halwai caste, also deserves some of the credit. The five people who are said to have begun the tradition all belonged to the Kasera caste. But even the members of this caste accept that they have learnt it from the Patwa samaj.

travelled in the Son region to collect information about Banabhatta. She handed over all the material she had collected to Dwivedi. The Brahmanical system is not known for patronising theatre but was forced to accept Bharat Muni’s Natyashastra as the fifth Veda due to its popularity.

Dawoodnagar – the city of disguises – has many Banabhattas. Art is not a means for earning money for the people of this town. They are associated with different professions while at the same time, serving the cause of art. Doctors, engineers, professors – all enthusiastically join the festival of Swang. Vijay Kumar, an expert in mimicry and a doctor, says, “The central and state governments should support the art and artistes of Dawoodnagar.” He adds, “Dawoodnagar can be an interesting subject for TV programmes centred on art.” One can only hope that the government and the ‘mainstream’ media pays heed to what he is saying.

Sanjeev Chandan is a journalist who writes short stories and edits Streekaal magazine.................. Ashish Kumar Anshu is a correspondent of the monthly Sopan and is known for his investigative articles