When Pramod Ranjan rang me up to say that FORWARD Press was bringing out an issue centred on Bahujan tradition and that he wanted me to write a piece for it, I was a bit distraught. I could not comprehend what Bahujan tradition could possibly be. India has Shramnic and Brahmanic traditions and there may be thousands of other small and big traditions as well. But Bahujan tradition? I could not think of what to write. I told Pramod about my dilemma but he was insistent that I may write whatever I wish, but write I must. That only compounded my problem. I tried to wriggle out but that is simply impossible in this age of mobile and SMS.

In Hindi, Dr Ramvilas Sharma can be credited with launching a discourse on tradition, which he, ultimately converted into an ism. His tradition discourse evoked a lot of criticism and today, hardly anyone needs to be told what his objective was. Humility was not one of the strong points of Ramvilas ji. He did not believe in using a discourse to arrive at a conclusion. Like lawyers, he decided his conclusion first and then his brilliant mind got to work to prove it correct. In that sense, Namvar Singh’s booklet Doosri Parampara Kee Khoj (The quest for a second tradition) was the first attempt at such a discourse in Hindi. This book was based on the writings of his guru, Pandit Hazari Prasad Dwivedi. From here began a meaningful discourse in Hindi.

Customs are not tradition

Dr. Namvar Singh begins his book with an anecdote. A widow at Shanti Niketan wanted to marry her daughter according to Hindu rites. Someone said that a widow cannot perform Nandi Shraddha (a ritual). Gururudev (Ravindranath Tagore) summoned jyotishacharya (chief astrologer) Pandit Hazari Prasad Dwivedi, who had just arrived from Kashi, and asked him, “The history of Hindus goes back thousands of years. Is it for the first time that such a thing is being attempted? Such a situation must have risen earlier also?” Panditji pored over Smriti scriptures and found that there were many sentences suggesting that widows enjoyed that right but in totality, the inescapable conclusion was that widows could not perform Nandi Shraddha. He conveyed his opinion to Gurudev, who laughed and asked him ‘Are the older Rishis, whose views have been contradicted by the newer ones, less blessed?”. The question shook Panditji. Is tradition only what was said or done earlier? Does it not include what happened in the subsequent times? The tradition, which, he, till then, believed was something seamless, like Shivdhanush (the bow of Lord Shiva) broke into innumerable pieces. He suddenly realized that there can be more traditions than one. (Doorsri Parampara Kee Khoj, Dr. Namvar Singh, Rajkamal Prakashan, Delhi p. 11).

There are many customs and there are many traditions. Some people mix tradition with customs. They confuse customs with tradition. For instance, they say ‘Hindu tradition’ when they mean ‘Hindu customs’. The way you dress, your eating habits – these are not traditions but customs. In any discourse on tradition, this confusion should be avoided.

But what can Bahujan tradition be? How is it recognized? I told Pramod Ranjan that it will be better to call it Bahujan-Shraman tradition. Though I said this without much thought and I cannot vouch for the correctness of my formulation either I stand by it. Of course, if someone comes up with a convincing alternative, I won’t take a moment to withdraw from my stand.

In our country and society, for centuries, two traditions of thought have existed side-by-side. One is the Shraman tradition and the other, Brahmin tradition. Our dictionaries define ‘Shraman’ as hardworking and diligent while ‘Brahmin’ is defined as chaitanya (consciousness). Janmana jayate shudrah, sanskare dwij uchyate (Everyone is Shudra by birth, it is qualities that make one Dwij or Brahmin). Knowledge (symbolized by the sacred thread) makes someone a Dwij. And at the summit of the Dwijs are Brahmins – those with complete consciousness.

But how this group of persons with ‘complete consciouness’ would survive? For that an elaborate state and religious power structure was created. Since survival is difficult without physical labour an exploitative and hypocritical system was put in place. Avoidance of physical labour is the foundation of the Brahmanical value system. Your place in the hierarchy is determined by how little work you do. Brahmins are at the top, followed by Kshatriyas and Vaishyas. Since Kshatriyas and Vaishyas have to do a bit of physical labour, hence they have been placed at a lower level than Brahmins. On the other hand, Shudras have been burdened with so much physical labour that they were barred from acquiring knowledge. ‘Na Shudray Matidyat’ (Don’t give wisdom to Shudras). Don’t allow them to attain consciousness. For, most of the people should remain fools so that some can attain consciousness. This is the root of Brahmanical thinking. And this thinking is alive and kicking even today. 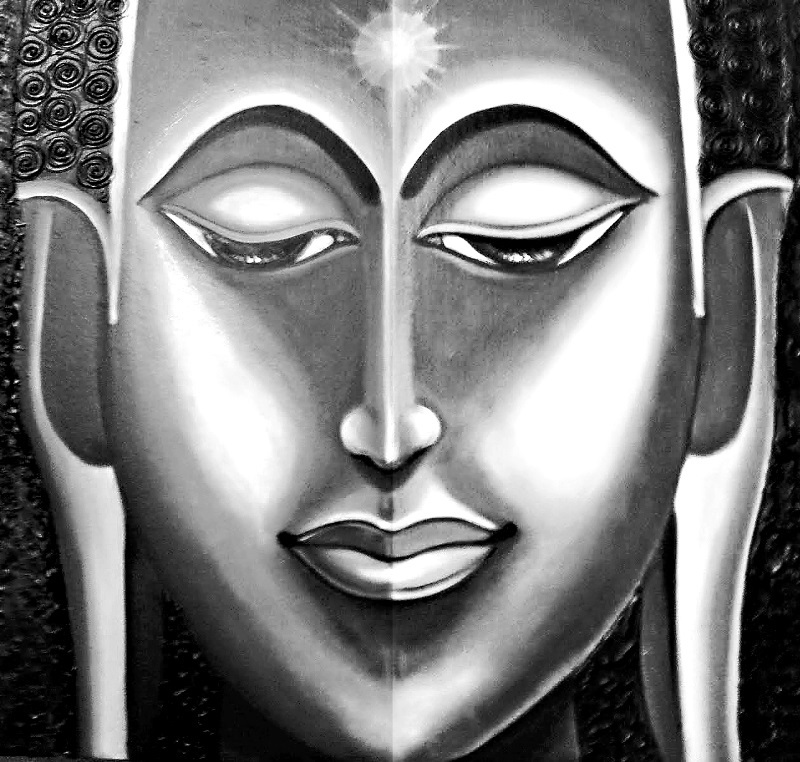 Buddha’s thoughts were not for a minority; they were for a majority. This was his democratic initiative. For most, not just for a few. This tradition is called Shraman. This tradition did not ignore the Shudras or build an elaborate structure for their exploitation, as Brahmin ideology had done. The gods Buddha talks about are possibly the Brahmins, equipped with consciousness. Shraman thinking talks of equality. It talks of wider liberation not of limited liberation.

In short, this is the difference between these two traditions. In our country, the Brahmin tradition became so strong that Shraman tradition went out of reckoning. The result was the country was enslaved and remained so for long. Even today, we are slaves in many senses. Socially and culturally, we are still backward. We cannot acquire the expected politico-economic clout if the present trend continues. Sometimes, for the sake of vote politics, attempts are made to convert the Bahujan Shraman cultural tradition into Sarvajan tradition. This was first attempted by Vinoba, then by Mayawati and now Narendra Modi – all singing the same old song. In fact, Sarvajan thinking is a cleverly disguised attempt at preserving Brahmin ideology. But this discourse will be a long one. This short article is not enough for it.

In the end, I would like to quote an incident from the Mahabharata. The war is over and all the sons of Draupadi are dead. She is bitterly crying. Trying to console her, Krishna says, “This is bound to happen in wars”. Draupadi replies, “Krishna, do you think I do not understand this simple thing. I understand it very well. The cause of my distress is not only that my sons have been killed. It is also that only I am crying for my sons. When Ghatotkaccha was killed, Bhim cried bitterly and Arjun was all tears when Abhimanyu died. But despite my sons having five fathers, only I am crying for them. Is the one who is everyone’s not anyone’s”.

Krishna shakes his head and says, ‘Draupadi, this is true”.
One who is of everyone belongs to no one. This conundrum must have troubled Buddha also. That is why he talked of ‘Bahujan hitay, Bahujan sukhay’. Our politicians and social thinkers should ponder over this. 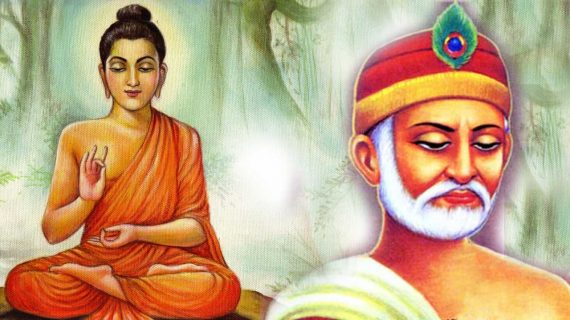 From the Bahujan Literature Annual 2013 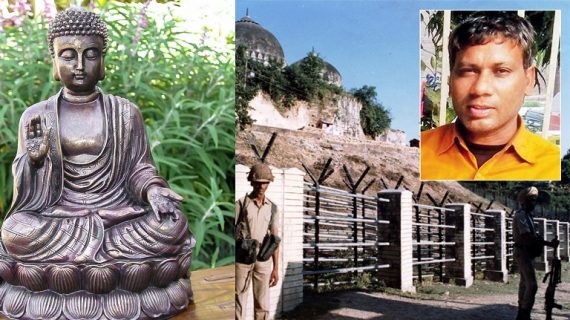 Why Buddhists are the real claimants of Ayodhya? Petitioner Vineet Kumar Maurya’s take

Vineet Kumar Maurya, a resident of Ayodhya, claims that excavations at the disputed site had unearthed remains from the Ashokan era linked to Buddhism. The Supreme Court has admitted his petition. Edited excerpts of an exclusive interview with Vineet Kumar Maurya 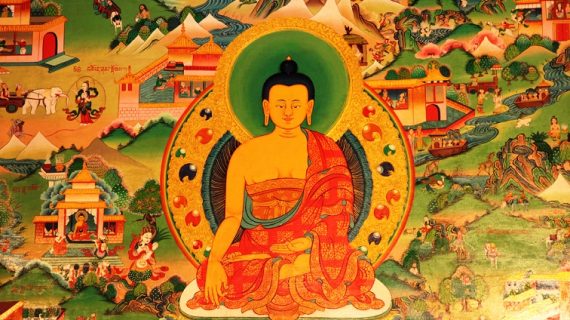