The hidden criteria that seem to have been used to select villages for adoption under the Prime Minister’s much-touted MP Model Village Scheme have raised suspicions that the real objective of the scheme is to further a political cause.

According to the news website Scroll.in, in Uttar Pradesh, which sent 71 BJP MPs to the Parliament, 16 of the 20 villages picked for the scheme are those which have no Muslims. Although it would be unfair to draw any conclusions from a survey that covered only 20 of the 71 villages adopted by BJP MPs, it could be construed as indicative of a trend, especially, since the village Jayapur, adopted by Prime Minister Narendra Modi himself in his constituency Banaras, does not have a single Muslim resident. One would not be much off the mark in concluding that the selection of all-Hindu villages is deliberate. BJP MP Hukum Singh, an accused in the communal violence in Kairana, Muzaffarnagar district, last year, has adopted an all-Hindu Sukhedi village and the pradhan of the village sees nothing wrong with it. Sanjeev Baliyan, MP – who, as independent investigations revealed, was the prime conspirator behind the Muzaffarnagar communal violence – has adopted the village Rasoolpur Jatav. Here, Naresh Kumar, the husband of the pradhan, not only believes that being a “pure Hindu village” is the reason the MP adopted the village but is also proud of it. It is thus clear that the scheme has been a well-thought-out strategy to direct government funds to and develop villages that have only a Hindu populace or are predominantly Hindu. 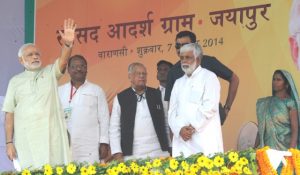 Notwithstanding its claims of “taking everyone together”, the Modi government is doing exactly what it wants to do – discriminating on the basis of religion. But the question is what the BJP hopes to achieve through this scheme. This question assumes significance in light of the fact that the RSS – widely believed to be holding the remote control of the BJP – makes any move only after considerable deliberation, keeping its long-term objectives in view.

In fact, the MP Model Village Scheme is aimed at benefitting the BJP and the Sangh at two levels. Firstly, even today, caste hierarchy is intact in villages – not only the intangible discrimination on the basis of caste but also the tolas or clusters of different castes, especially of those belonging to Dalit, OBC or EBC castes. This is reflected in the political preferences of the villagers, too. For instance, people of different castes vote for different parties. In short, the saffron brotherhood is well aware that if rural India is to be brought under the sway of the BJP, it is imperative to dismantle the OBC and Dalit politics that draws sustenance from the slogan of social justice, and this is possible only by bringing the various castes on one platform.

Now, it would be difficult to implement the plan of building “ideal Hindutvavadi unity” in villages inhabited by people of different castes, with their inherent conflicting interests – even more so, if the villages have Muslim residents too. So, why not start with all-Hindu villages? This will also ensure the
perpetuation of the Varna system. “Development” will reach the Dalits and the OBCs on the basis of their caste identity. Annihilation of caste would not be on the agenda at all. Varna-based discrimination would remain in place while at the same time, OBCs and Dalits would be brought under the Hindutva umbrella.
According to a report prepared by Ahmadabad-based Navsarjan Trust in association with three US-based organizations – Kroc Institute for International Peace Studies (University of Notre Dame), University of Michigan, and Robert F. Kennedy Center for Social Justice & Human Rights – 98 per cent of the Dalits in Gujarat are served tea by tea-stall owners in separate cups called “Ram Patra”. The report is based on interviews with 98,000 Dalits of Gujarat. Here, it is important to note that a large section of Dalits in Gujarat votes for the BJP in the name of Hindutva. It is this “Gujarat model” that the Sangh Parivar wants to implement across the country through the MP Model Village Scheme.

The second objective of the scheme is to bring the worldview of urban Indians, who form the core of the BJP supporters, to the villages. This is an easily achievable given that the urban middle class and lower middle class still stay in touch with their ancestral villages. The Sangh knows that this will help residents of villages and cities think and behave alike, and will politically unify rural and urban India. This is also a formula imported from Gujarat, where, according to Achyut Yagnik, a well-known sociologist and a keen watcher of the Sangh Parivar’s politics, the demonization of Muslims was used to obliterate the difference in electoral preferences of villagers and urbanites. The Sangh and the BJP united the Hindus of various castes by raising the spectre of a Muslim takeover, and the villagers, who used to vote for the Congress, were forced to toe the line of their BJP-voting urban counterparts. The signboards at the entrance of villages, declaring them as “Hindu Grams” (Hindu villages), are proof of this phenomenon. That was partly why communal violence, which was hitherto an urban phenomenon, engulfed the villages too in 2002. Over the last two years, villages have become the epicentre of communal violence in Uttar Pradesh, be it Faizabad, Kosi Kalan (Mathura), Asthan (Pratapgarh) or Muzaffarnagar. Given this history, there is clearly more to the MP Model Village Scheme – especially in Uttar Pradesh, which is fast becoming the hotbed of communal politics – than meets the eye.