Dainik Jagran claims that it has the highest readership among all newspapers in the world. But on 12 November 2014, the readers of the Jamui (Bihar) edition of the newspaper would not have known about the death of 11 women at Bilaspur in Chhattisgarh who had just undergone tubectomy. The readers of the Araria (Bihar) edition too would have missed the news. Dainik Jagran has hundreds of editions. A study of a couple of them would reveal that thousands of readers of this newspaper with the “highest readership” in the world would not have come to know of the Bilaspur incident.While some editions gave the news a complete miss, the ones that did carry it had different ways of presenting it. If there was any method to this exercise, this author was unable to discern it. For instance, in the Delhi city edition, the news was on page 1. It was on page 14 in the Almora edition and on page 11 in the Asansol edition.The readers of the Allahabad edition had to turn to page 15 to read it while in the Azamgarh edition, it got a single column on page 13, which is meant for business/national news. In the Meerut edition, the news was 108-word long and was buried between all kinds of news items. In the edition published from Ranchi, the capital of Jharkhand, it could be read on page 16. In Lucknow, capital of India’s largest state, a reader dependent only on Dainik Jagran for news would have not even known that such an incident had taken place.

In journalism, what happens in the aftermath of a big incident is also given due importance. There are follow-up news items. But Dainik Jagran did not consider this news item worthy of a follow-up.

Interestingly, the Bilaspur correspondent of Nai Dunia had covered the incident for Dainik Jagran. The owners of Dainik Jagran also own Nai Dunia. This shows how news reaches lakhs of readers. If the correspondent conceals one particular fact, he can deprive lakhs of persons from knowing the whole truth. His influence can only be imagined. It is also important to know what a newspaper is suppressing or ignoring. The placement of the story is also important. For instance, the Ranchi edition of Dainik Jagran had published the news just below the photograph of the glamorous Miss International. Some other editions had placed it next to the picture of actress Aishwarya Rai. Thirdly, the news did not mention that, of the 13 women who were killed, 12 belonged to the backward classes and one was a Baiga tribal, and that there has been a ban on the sterilization of Baiga women since 1984 as the tribe is on the verge of extinction.

Given this is how the incident has been covered, there is a very feeble chance of reporting on related developments or of follow-up stories. The news items did not have a word on why no central government minister or top BJP leader visited the place of the incident.

When Union Minister Sadhvi Niranjan Jyoti made the communal “haramzade” comment, it was widely reported that she belongs to a backward community. When the demand was made in the Parliament for her resignation, the newspapers argued that the opposition parties were after her as she was a Dalit. Thus, here, her belonging to a backward caste was used as a defence.

How newspapers sift through news

We are curious about the criteria adopted by newspapers for selecting news items for publication. Is it not against the ethics of journalism to deprive readers of a piece of news or not present it in a proper manner? Why are the readers deprived of news items concerning the deprived sections of the society, especially ones that expose their socio-economic exploitation or repression?

There are growing complaints that newspapers have no place for news related to the miseries and problems of the OBCs, Dalits, Tribals, minorities and women. The TV channels, from the very outset, have been allergic to such news. In every district, the readers should draw up a list of the news items and details of which they have been deprived by each newspaper. The residents of a district are not only interested in what is happening in that district. Newspapers link the readers of every district with each other. The readers are also interested in what is happening in their state and in the country and even in the world. But the newspapers presume that they are concerned only with the news of their districts. People want to share in the mirth and misery of their compatriots living in other parts of the nation. But the newspapers seem to feel that merely by linking their readers with the market, they are linking them to the country.

For the last several years, the Media Studies Group has been monitoring the kind of news that is not published or telecast. Here are examples of what is published and what is not so that the readers can understand the economics, sociology and politics of the phenomenon.

Someone from Banaras informs me that Mukesh Ambani and his wife Neeta Ambani visited a Ganga ghat. The occasion was the birthday of Neeta Ambani. The Benaras editions of the The Times of India and Hindustan Times published the news as a lead story, along with photographs. On the other hand, a group of hundreds of Buddhists, who were participating in a march, were stopped from reaching the ghat so that the Ambani couple could spend some peaceful time together. Although the Buddhists were marching in support of the Clean Ganga Campaign, there was not a word in the two newspapers about them.

L.S. Herdenia, a former journalist and now a social activist working for secularism, telephoned me. He was perturbed over news relating to people’s movements not being reported in the media. He told me that on 3 December 2014 more than 3,000 people gathered in Bhopal to demand fundamental changes in the educational system. They had reached there as yatras that had begun in Manipur, Tamil Nadu, Jammu & Kashmir, Kerala and all other states of the country. The yatras congregated in Bhopal to express their solidarity with the Bhopal gas tragedy victims. Cultural programmes were also organized on the occasion. It was highlighted how children from poor families were being edged out of the educational system as education became prohibitively expensive. This was a very important event. It was an expression of national concern over the educational system of the country turning increasingly exclusive. But the newspapers gave it a complete miss.h

Herdenia said that a couple of days later a big event was organized in Bhopal to oppose the so-called “reforms” in the labour laws that were aimed at making them favourable to the employer. Almost all nationally known trade unions, including the Bharatiya Mazdoor Sangh, the trade union arm of the RSS, had joined the protest. But again, the newspapers did not deem it fit to carry this news.

Herdenia gave a list of such overlooked news to me and pointed out that the RSS, BJP and hundreds of associated organizations get space in newspapers quite easily. Their press releases and the news of their activities are published prominently. But the media ignores the voices against the Sangh and its associates. While anti-constitutional utterances of members of the Sangh Parivar are accommodated, their opposition is blacked out. 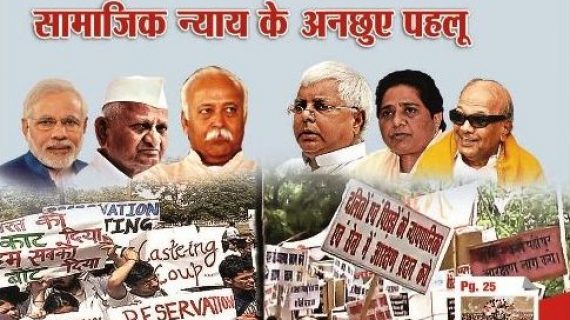