In the general elections held last year, for the first time, the BJP, under the leadership of Narendra Modi, got the mandate to rule the country. After the election results, Mulayam Singh Yadav and Nitish Kumar gave their reactions. Even a cursory analysis of their statements would reveal that both leaders believe that mass communication played a decisive role in the Lok Sabha elections. It is widely believed that it was an election of the media, by the media and for the media.

Modi used almost all the means of mass communication deftly and the opposition parties could do little except marvel at his strategy. Modi’s poll campaign was the costliest of them all. Watchers of the poll scene say that Modi’s team outmanoeuvred not only all his rivals but also the system. According to the Election Commission of India rules, campaigning must end 48 hours prior to voting. But the Narendra Modi team flouted the rules with impunity. It continued to campaign even when voting was underway. When Assam was voting, the BJP ran its advertisements on TV channels and the internet in Delhi. During voting in Delhi, the BJP continued to influence the voters by publishing huge advertisements in newspapers. 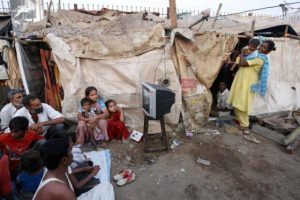 The media wanted something to justify its pro-Modi stance. And the Modi team provided, in fact manufactured, incidents to help it. Private companies were given contracts to manufacture events for the media. It is estimated that Modi’s total campaign expenses ran into upwards of tens of thousands of crore rupees.

Thus, there were two distinct types of leaders in the poll arena. There were leaders who tried to lure voters through sops. Akhilesh Yadav’s SP government distributed laptops among students. The SP, perhaps, believed this was sure-fire way of winning the support of youngsters. An apocryphal joke did the rounds in Bihar when Nitish Kumar was the chief minister. It went like this. Someone was asked which state in the country had the happiest people. Pat came the answer: Bihar. When the incredulous questioner sought elaboration, he was told that the people of the state get many opportunities during a day to be happy. Whenever power supply is resumed after hours, they jump with joy. Nitish Kumar deprived them of this joy. He thought that by ensuring 24-hour power supply, he would make the voters happy. They would be able to watch TV, they would be able to charge their mobiles. But what actually happened was just the opposite. People watched TV and charged their mobiles but then Modi appeared on the screens to lead them into his dreamland. The people believed Modi, and Nitish Kumar realized this bitter truth after the polls were over.

Understanding how to distribute mass communication devices and the politics of using them means understanding the tools of today’s politics. In the third world, the media is used to promote capitalist programmes and ideology. Our Constitution proclaims that we are a socialist republic but the political parties vie with one another to implement patently capitalist programmes and policies. Even the parties that shout from the rooftops that they are parties for social justice and have the word “socialist” as part of their names claim that they would bring socialism through the capitalist route! Distributing mass communication devices, in their view, is a socialist programme. Indira Gandhi gave the country the gift of colour television. As the number of TV channels began growing, the socialist parties in Tamil Nadu felt that they could usher in social justice by distributing colour TV sets to the people. They also established complete control over the cable TV networks. But that did not better the lot of the Dalits. That did not eliminate the system of untouchability. In our country, every year, hundreds of cases of atrocities on Dalits and of the practice of untouchability are reported. If young lovers of OBC/Dalit communities and “pure” castes decide to get married, it is the Dalits who are attacked. Their villages and houses are destroyed.

Akhilesh’s father Mulayam Singh and Nitish Kumar use the politics of social justice to promote capitalist thoughts and programmes. Obviously, their emphasis is not on preparing material that would help promote the cause of social justice. They do not realize that a sustained campaign is needed for this. But they try to lure voters by connecting their homes with the various means of mass communication that are the vehicles of capitalist ideas and programmes. The result is that those who prepare material to be transmitted through these media of mass communication have honed their strategy to perfection and are scoring over the others. They make others spend money to enable the voters to get access to the means of mass communication and use them to beam their message. You are under an illusion that you own the means of communication just because you have bought it. The real owner says that you are only his messenger.