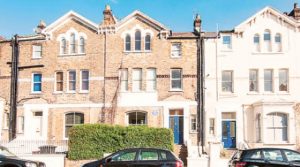 Mumbai: The Maharashtra has announced that it would purchase the 2,050-square foot London house where Dr Babasaheb Ambedkar stayed from 1921-22 while he was enrolled at the London School of Economics for his PhD. Maharashtra Education Minister Vinod Tawde announced the decision after consulting with Chief Minister Devendra Fadnavis. The house – 10, King Henry Road, NW3 – will cost Rs 35 crores. “The residence will be open to public from April 14, Ambedkar’s birth anniversary,” Tawde said. The government would have missed the opportunity to buy the house had Mumbai-based millionaire Kalpana Saroj not spotted the “For Sale” sign at its door. Saroj had met National Security Advisor Ajit Doval in Delhi and lobbied with both the earlier Congress government and the present BJP government in Maharashtra. Needless to say, she is thrilled about the decision. “The house is like a temple of knowledge. After all, this is the place where Babasaheb Ambedkar lived while completing a six-year course in two years flat,” she said.