Well-known literary and political personality PREM KUMAR MANI had written this letter last month, when the then Bihar chief minister Jitan Ram Manjhi, a Dalit, and Nitish Kumar, an OBC, were locked in a fierce political battle. Ultimately, on 20 February, Manjhi put in his papers. What Mani wanted was that a rift should not develop between the Dalits and the OBCs in Bihar, as has happened in Uttar Pradesh over the last couple of years. Reports suggest that efforts are being made to bring the Dalits and the OBCs on one platform in UP. It is a socio-economic imperative that such a united political front is forged all over the country. What happened in Bihar in the recent past raises the apprehension that Dalits and OBCs may go their separate political ways. There is little doubt that the forces we call feudal / rightist will be the biggest beneficiary of this. In this letter, Mani has expressed the desire that the politics of Bihar should send out a new message to the country. That is why he had suggested to Nitish Kumar that he should talk with Manjhi. While Manjhi is no longer the chief minister, the questions born of the chain of events that led to his resignation are still there. We think that this letter is still relevant in the sense that it can be an aid to understanding the politics of Bihar. – Editor

In view of the political situation in Bihar, I have been constrained to write to you again, especially since you are the creator of this situation. Maybe, what I am going to say will not be to your liking. But since the issue is of Bihar’s future – not mine – I am going ahead, even at the risk of antagonizing you.

Frustrated and disappointed with the results of the Lok Sabha elections held last year or perhaps to overcome your humiliation, you gave up your chief ministerial position on 18 May 2014. That led me to believe that you had again turned into a respecter of democratic values. But if that was really so, you should have also recommended to the governor to dissolve the Vidhan Sabha, paving the way for fresh elections. The current Vidhan Sabha (State Assembly) lost its moral mandate way back on 16 June 2013, when your party withdrew from the BJP-led NDA coalition. Since then, it has been an opportunistic government ruling the state, courtesy of unscrupulous permutations and combinations. 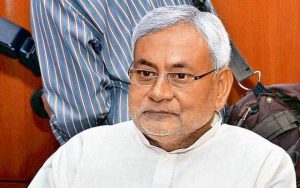 It is my firm opinion that in the 2010 assembly polls, the mandate was for the NDA and not for the JD-U or BJP alone. By giving you a sound drubbing in the 2014 Lok Sabha elections, the people clearly mandated what you should do. That should have been, for you, a time for introspection. You had lost because of your arrogance. You needed to shed it. You had the will power to do it. But, instead, you played a shrewd game. While posing as someone making a great sacrifice, through your sycophants, you made the JD-U legislature party authorize you to nominate its new leader . ( just as in our scriptures, Ravana had usurped all powers and rights) Then, suddenly, you donned the garb of a saviour of the Dalits and surprised everyone by announcing that Mahadalit Jitan Ram Manjhi would be the new chief minister of the state. You were, in fact, parodying Sonia Gandhi, who had similarly anointed Manmohan Singh as Prime Minister. At that time, you had said to me that what Sonia Gandhi had done smacked of Manuvadi Brahaminism in which alms are given to beggars. This is not at all democratic, you had remarked.

You parodied 2004 in 2014, spiced it up with the slogan of social justice and donned the mantle of the saviour of the Dalits. Your picture was put up in Manjhi’s house. And as Manjhi told an interviewer, you had become a god for his family. You created a Hanuman and became Ram yourself. You became the giver and he, the taker. This Ram-Hanuman pair was a hit for a couple of months. This, to a large extent, was responsible for your successes in the Vidhan Sabha by-elections. Your stock was up again.

But what happened in the last six to eight months that your Hanuman became an eyesore for you? I have also been in touch with Manjhi and was surprised to know that he still has great respect for you. He holds you in high esteem. But your supporters are harassing him. I could understand his problem, as I know your supporters intimately.

Nitishji, about 15 years ago, out of exasperation, I had told you that before reforming Bihar you should reform the people in your inner circle. I would once again like to request you that you should reflect on what sort of people are surrounding you. As far as I can see, you are surrounded by the corrupt and sycophants. You have drifted away from your plain-speaking friends. Today, I can only pity you for the situation you have landed yourself in.
The first thing you should have done is to use your influence to ask all your ministers and party office-bearers to resign a la the Kamraj scheme and revamp both the party and the cabinet. You thrust your entire council of ministers on Manjhi. This ministry was constituted by you. Manjhi did not even get the freedom to select his own ministers. Once upon a time, the slave dynasty ruled this country. You have achieved the rare feat of having a slave chief minister in a democratic set-up. What a great fall!

Nitishji, probably you are not aware how those close to you have plundered and destroyed Bihar using your name. I would have been happy if, abandoning your lust for power, you would have been alert to this loot. There was a time when we had decided to give a new shape to the political culture of Bihar. But you steadily allowed your party to become a sanctuary for criminals and distorted the politics of the state. You have become so myopic that you can’t see this distortion nor understand it. I can only wish that your sight becomes normal as soon as possible.

I would again request you to do a rethink on your politics and, if possible, re-establish cordial relations with Manjhi. Your ego should not come in the way of this. If you consider yourself superior due to your caste, I have nothing to say, but consider that Manjhi is senior to you in age and experience. He comes from a community which has always been on the last rung of the social ladder. Whatever he is today, it is because of you. You are his creator. Why are you bent upon destroying your own creation? There was a time when we had together dreamt of ushering in social justice. We all have been criticizing Ram, the hero of the epic Ramayana, for killing Shambuk. That was a stigma on his character. Lohia used to say that Ram had killed Shambuk at the instigation of people believing in the tradition of Vashistha. The lobby of Vashisthas around you is getting stronger by the day and at their instance, you have picked up the sword to slay not Shambuk, but your own Hanuman. This would be a sin – a great sin. Your advisers want to make you a slayer of Dalits. Some say that behind your anti-Dalit mindset is the psychological background of the Belchi Dalit immolations. As a dear and elder friend, I would request you not to fall prey to the machination of the shrewd casteist elements and, instead of associating yourself with the tradition of the Bhoomi Sena and the Ranvir Sena, join the great humanist stream of social justice and socialism. It was with great effort that Karpoori Thakur and other socialists had built the political unity of the Dalit-Backwards. You are out to ruin it. This does not augur well for the future of Bihar. Every village would become a battleground. There would be a civil war, with upper OBCs on one side and Dalits on the other. I need not tell you who would gain politically by this.

I am an atheist but you have faith in god. It is said that no devotee can ever reach god; it is god who comes to his devotees. You should show magnanimity in these difficult times. You should talk to Shri Manjhi yourself. I am saying all this for your sake – for your liberation, salvation. Turn into a rebel. Break free from the stranglehold of the Vashisthas surrounding you. Go back to your tradition. This is most important.
Yours,