Ambedkar used the media, especially his newspapers, effectively to expose the numerous Hindu myths, mysticisms and mumbo jumbos justifying the injustices of Indian society. He broke the shackles of traditionalism, religious orthodoxy and superstitions. He bluntly rejected the whole system of brahmanical religion – the infallibility of the Vedas, transmigration of the soul, the efficacy of rites and rituals, the “moksha” after the cycle of births, and “Iswara” as the creator of the universe. He also rejected the whole of Upanishadic thought as mere imagination. He opposed out and out the “Chaturvarnya” system, which was made a “sacred institution” and a “divine ordination”. He concluded that there cannot be a more degrading system of social organization than “Chaturvarnya” which deadens, paralyses and cripples the people, and prevents them from working for the betterment of society.

Ambedkar propagated his revolutionary ideas, views and experiences through his newspapers namely – Mookanayak (Leader of the Dumb), Bahiskrit Bharat (Excluded India), Samata (Equality), Janata (People) and Prabuddha Bharat (Enlightened India). Ambedkar launched Mookanayak on 31 January 1920 with financial support from the king of Kolhapur through Dattoba Pawar. How violent and unfavourable were the times can be seen from the fact that the Kesari refused even to announce its publication. This happened when Tilak was still alive.

In the first issue of the Mookanayak, Ambedkar brilliantly propounded the aim of the paper in simple yet convincing and forceful language. He wrote that India was a home of inequality. Hindu society, he observed, was just like a tower that had several storeys but without a ladder or an entrance. One was destined to die in 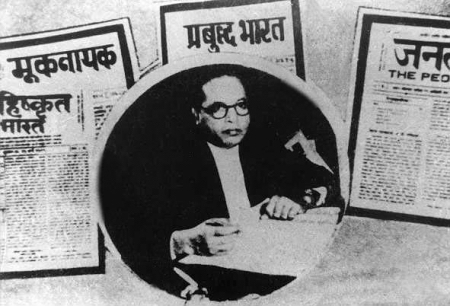 the storey in which one was born. Hindu society, he continued, consisted of three parts: the Brahmins, the non-Brahmins and the untouchables. He pitied the souls of those who believed God existed in animals as well as inanimate things and yet treated their co-religionists as untouchables. He lamented that Brahmins aimed not to spread but to monopolize knowledge and literacy. In his view, the backwardness of the non-Brahmins was due to a lack of education and power; in order to save the Backwards from perpetual slavery, poverty and ignorance, herculean efforts must be made to free them from their disabilities.

Another Mooknayak article asserted that it was not enough for India to be an independent country. She must guarantee equal status in matters religious, social, economic and political, to all classes, offering every man an opportunity to rise in the scale of life and creating conditions favourable to his advancement. There did not exist such a despicable man who, continued the voice in the article, would object to the statement that if the Brahmins were justified in their attack upon and opposition to the unjust power of the British government, the depressed classes would be justified a hundred times more in their opposition to the rule of the Brahmins in case the transfer of power took place. The article asserted that if the protection of the British were withdrawn, those who condescended to look at the untouchables would trample upon them. In another article Ambedkar wrote that, for the depressed classes, the Swaraj in which there were no fundamental rights guaranteed for them would not be a Swaraj but a new form of slavery.

Ambedkar heralded a new era of social-justice-oriented mass communication in India through Mooknayak. He could not continue this newspaper since he felt there was something else he needed to do more urgently: to accomplish educational progress among the depressed classes to liberate them from all the oppressive forces.

A bird without wings

Ambedkar established Bahishkrit Hitakarini Sabha to sustain his social movement for the upliftment of the downtrodden communities. This organization strove to secure social, educational, economic and political equality across castes, including the untouchables. Faced with a flood of criticisms, he felt the need for a mouthpiece as never before. He realized that a leader without a newspaper is like a bird without wings, so he launched a Marathi fortnightly, Bahiskrit Bharat on 3 April 1927 in Bombay.

Ambedkar realized early on the importance of financial independence when one worked for the public good. Hence, while he ran the newspaper, he never gave up practising law. Finances were a concern for a newspaper then as they are today. To those who argued that people were not prepared for a radical social change, Ambedkar hit back by asking them why they clamoured for the independence of the country when the people as a whole were neither prepared for it nor deserved it.

Dhananjay Keer [Dr Ambedkar: Life and Mission (1981), Popular Prakashan, Bombay], a close associate of Ambedkar, describes the role played by Ambedkar as the editor of Bahiskrit Bharat: “Ambedkar now began to explain his views, define his aims and reply to the critics of his movement through the new journal. He said that the temples and water sources should be open to the untouchables because the untouchables were Hindus. He wrote editorial after editorial in his short, crisp and fearless style, asking the government to bring into force the ‘Bole Resolution’ and not to trust the good sense of the local bodies for its implementation as they were dominated by reactionaries who were narrow-minded, old-fashioned, orthodox and antagonistic to the interests of the depressed classes. He also appealed to the government through his newspaper to punish the wrongdoers and trespassers who opposed the implementation of the above cited resolution.”

Ambedkar was not able to sustain the journals because of shortage of funds. He was not prepared to compromise on professional ethics. He did not become an agent of capitalists like most of the editors of his time. He never had any inclination towards making his newspaper a commercial venture.

There was indeed a notable evolution of Ambedkar’s role in the social, political and journalistic spheres of India. He caused a stir and described the sufferings of the outcasts in the first stage. He condemned the persecution of depressed classes in the second stage. He gave expression to their aspirations for equality in the third stage. He expressed the desire of his people for assimilation into Hindu society on the basis of equality, liberty and fraternity in the fourth stage.

Ambedkar was a great communicator. His observation on the Indian press provides a glimpse of his perception and practice which are upheld with great reverence by those who consider the media as an instrument of human progress. He wrote: “Journalism in India was once a profession. It has now become a trade. It has no more moral function than the manufacture of soap. It does not regard itself as the responsible adviser of the public. To give the news uncoloured by any motive, to present a certain view of public policy which it believes to be for the good of the community, to correct and chastise without fear all those, no matter how high, who have chosen a wrong or a barren path, is not regarded by journalism in India its first or foremost duty. To accept a hero and worship him has become its principal duty. Under it, news gives place to sensation, reasoned opinion to unreasoning passion, appeal to the minds of responsible people to appeal to the emotions of the irresponsible. … Never has the interest of country been sacrificed so senselessly for the propagation of hero-worship. Never has hero-worship become so blind that as we see it in India today. There are, I am glad to say, honourable exceptions. But they are too few and their voice is never heard.”

Dr B.P. Mahesh Chandra Guru is professor in the Department of Communication and Journalism, University of Mysore. He is the first Dalit-Buddhist professor of media studies, who, apart from teaching journalism over the past three decades, has held important administrative positions at the state and national levels. He has been a member of both the Karnataka State Service Commission and Union Public Service Commission (UPSC) and has been part of University Grants Commission (UGC) committees. He has published more than ten books in English and Kannada. Prof Guru has been involved in movements and discourses informed by Dalitbahujan consciousness