Ambedkar’s fight against discrimination and untouchability and for the right to enter temples, and the debates he initiated at the Round Table Conferences are well known. In 1936, Ambedkar also announced the underpinning edifice of his dream of a “Prabuddha Bharat” (Enlightened India) through the call for the “Annihilation of Caste”. He called for the nationalization of land and industries, and came up with critical solutions for cooperative farming. Redistribution of land to the landless was one of the core concerns he addressed. Ambedkar brought several provisions under the ambit of the Constitution for the upliftment of the weaker sections, along with the dominant sections of society, leaving behind the idea of nations within a nation. He consistently fought for the establishment of social democracy for the realization of political democracy, emphasizing equality to be an engagement at the social level rather than an enforced political phenomenon. In retrospect, the Dalit movement should have aimed at the annihilation of caste first, then the establishment of a secular or rational social democracy and finally ensuring the value-sharing mechanism.

Many of the constructs of Ambedkar can be traced to his basic objective of annihilation of castes and creating a society based on equality, liberty and fraternity. Despite the implementation of reservations by which spaces were to be created in educational institutions, employment and political spheres, and several positives from the move, Ambedkar’s dream of integrated community development or upward mobility remains a distant dream.

Systemic consolidation of caste and power

One reason for the resurgence of casteism is the inability of the Indian Dalit movement to address certain key questions. The other is the rise of Brahmanism, riding on the back of Hindutva fundamentalism, caste fascism and neoliberal capitalism, and mobilizing the dominant forces, castes, communities and sociopolitical groups. Casteism and caste-fascism and capitalism and globalization are closely knit. While capitalists capture global economic and political power across national boundaries, Indian caste-fascist forces act as their operational agents.

The ideology of capitalism assumes absoluteness only through fascism. The current political groups have nothing to do with the people, whose resources are rapidly being thrown open to the capitalists to explore and exploit. Targeting the resources – land and forest – is directly an assault on the indigenous Dalits and Adivasis. This eventually leads to large-scale displacement and migration, and robs them of their livelihood and rich tradition and culture. This is the best method of disempowerment. 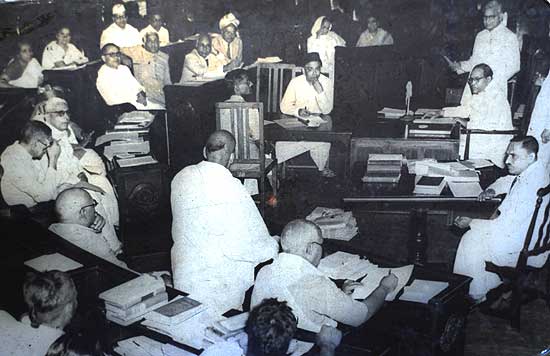 While the Brahmanism went on consolidating its position, flaws began to appear in the Dalit movements. Mostly, the Dalit movements remained focused on reservation, conversion and individual political and economic gains. Opportunistic politics was the norm. They were content with reaping immediate benefits rather than working towards the dream of a better nation. Dalit movement neither understood the politics of globalization nor addressed it in any form. What was needed was for it to enter the debate with the subaltern perspective. Instead, it remained passive to the process of globalization, and many times even joined the political groups supporting and sustaining it.

The globalization wave entered India through the economic reforms launched in July 1991. The political stability has a direct bearing on the process, pace and intensity of the globalization and reforms, which have been slow and inadequate. This has had quantitative and qualitative effects on food security, employment, inflation, poverty alleviation schemes as well as social security. For example, reservation in the educational institutions and the financial assistance in the form of scholarships and freeships has lost its relevance with the advent of education as an industry. Without education, all constitutional safeguards, including the reservation in services, would be futile. The economic reforms have already resulted in the freezing of grants to many institutions and in the stagnation, if not lowering, of the expenditure on education.

Howsoever unsatisfactory the results of the implementation of reservation in employment may be, its importance from the Dalit viewpoint cannot be overstated. As evidenced by the organized private sector, where it would be difficult to find a Dalit employee (save, of course, in scavenging and the lowliest jobs), Dalits would have been doomed without reservations. Whatever be their defects and deficiencies, they have provided means of livelihood and some social prestige to the sons and daughters of more than 1.5 million landless labourers. Whether they have real power or not, more than 50,000 Dalits have entered the bureaucracy with the help of reservations. Besides these tangible benefits, reservation in jobs has instilled hope in the Dalit community. This hope manifests in more and more of them getting an education.

Two crucial incidents would remain as irremovable scars in the Dalit history of India – one being the 1992 demolition of Babri Masjid and the 2002 Gujarat genocide. Regretfully, no Dalit organization took a strong stand against either of these incidents. Instead Dalits became the foot soldiers of the Hindutva forces against the Muslims. The same Brahmins, Banias and Patidars, who constitute the Hindutva command today, had sparked off the 1981 anti-reservation riots against Dalits. The riots were a part of their protest against the reservation system that gave Dalits a chance to study in medical and engineering colleges. It led to riots in which Dalits were targeted in 18 of Gujarat’s 19 districts. During these riots, the Muslims sheltered Dalits. Dalits faced the wrath of same Brahmins, Banias and Patidars combine again in 1985. This time, their agitation was against the increase in job quotas for the OBCs in government and educational institutions. The Dalits supported reservations for the OBCs, which were recommended by the Mandal Commission.

Any pragmatic and progressive movement cannot stand on the selective criticism of a few religious texts or political ideologies and conveniently keep quiet on other important questions. A movement cannot be built on a superfluous philosophy of negativism. It has to provide its own alternative to the people.

Dr Ambedkar certainly was not dogmatic. Rather, he was pragmatic. He had rightly confronted the forces of casteism, fascism, communalism, imperialism and capitalism. He believed that any system that promotes unequal human relationships should not thrive. If there was anyone who grasped imperialism fully, it was Ambedkar. A true democrat, Ambedkar, far from being a stooge of British imperialism – as indicated by some leftist and pseudo nationalists – was against imperialism of every hue. He saw imperialism in its totality – as a rule of one society over another, not necessarily as a rule of one nation over another. He was of the view that anything being enforced on others in the social, political or economic sphere is the core of imperialism.

Yet another distortion of Dr Ambedkar’s stand is that he was in favour of foreign rule or colonization. He made strategic use of the British rule as an arbitrator between the Hindus and Dalits. He was fully aware, perhaps better than many swadeshi sloganeers of his times, of the exploitative character of the British imperialism and its social and economic importance. Ambedkar wrote three scholarly books on economics in which he closely looks at the role of the British imperialism, its overall impact on the different sections of Indian society. In Administration and Finance of the East India Company, he exposed how the East India Company exploited Indians from 1792 to 1858 and after its rule was abolished in 1858, how instead of removing the injustice, the British crown increased it by burdening the starving Indians with the huge debt incurred by the East India Company. The Evolution of Provincial Finance in British India analyses the evolution of centre-state financial relations in British India during the period 1833 through 1921. The Problem of the Rupee: Its Origin and Its Solution is considered to be his magnum opus in economics.

We need to closely study Ambedkar. His idea of a secular, socialist and democratic India is still valid as the guiding principle in the creation of a new India. This means one needs to work towards developing a counterculture – an alternative culture that can combat the growing trend of casteism, fascism, globalization and imperialism. Unless we consciously create a sense of counterculture time and again, all other efforts will be in vain.

There are elements of this counterculture still alive around us, mostly observed in the Dalit and Adivasi art forms – direct democracy, social engagement, egalitarianism and justice. The edifice of this counterculture is based on the culture and art forms of those who have suffered considerably. It is a search for fullness of life and quest for justice in a dark world. Here, values are not individual-centric. Rather, they are based on the common good. These people’s consciousness of prosperity is of higher degree and greater value, through which perhaps one can visualize an Enlightened India.