Canada gets another Ambedkar bust 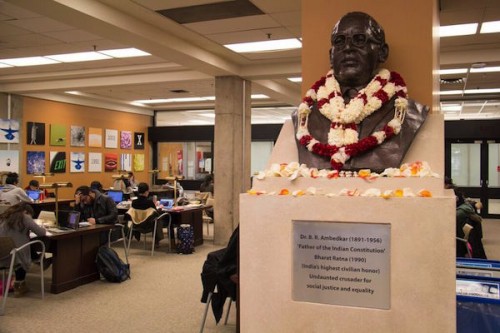 On 2 December 2015, Toronto’s York University became the second Canadian university and the fourth in the world to honour Dr B.R. Ambedkar with a memorial bust. The bronze bust, now housed in the university’s Scott Library, was donated by the Ambedkar International Mission (AIM) Canada, Toronto. It was unveiled by Vishnu Prakash, the high commissioner of India to Canada, in the presence of Prof (Ret’d) Arun Gautam, president of AIM, and other guests. Among the many speakers on that occasion, noteworthy was York’s Vice-President of Research & Innovation Robert Haché. He said, “York University has a well-known mandate for social justice …Celebrating luminaries like Dr Ambedkar always serve as a reminder of the work we still need to do … ” Dr Sukhadeo Thorat, chairperson of the Indian Council of Social Science Research (ICSSR), had the final word in his keynote speech.

A rally will be organized at Jantar-Mantar in New Delhi on 27 March 2016 demanding reservation for EBCs and denotified nomadic tribes within the 27 per cent quota for OBCs. The rally, in which people belonging to these communities from all over the country will take part, will be led by Haribhau Rathod, a former MP and presently an MLC. The participants will demand reservations for EBCs like Nhavi, Khati, Lohar, Sutar, Kumbhar, Teli, Mali, Haribhau RathodKoli, Dhobhi and Gowari and denotified nomadic tribes like Banjara, Kalbelia, Sapera,Kahar, Kashyap, Paal, Baghel, Sansi, Koli, Lodh, Gadaria and Dhangarh.