I was on my way to a friend’s village to attend his sister’s wedding. After getting off the bus, I knew that I would have to ride a tonga for about five to six kilometres. Soon, I was sitting on a stationary tonga that was waiting for more passengers to arrive. 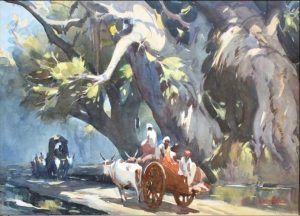 I had been told that the tonga drivers were a voluble lot. It turned out to be true.

The tongawallah must have been fortyish. An “angocha” (thin towel) wrapped around his head, whip in hand, he was calling out to potential passengers. Whenever anyone asked him when he would leave, the instant reply was, “Just a moment and we’ll be off. But that was just an assurance. The wait kept on getting longer. When the tonga was full, he was again asked to get going. “Just a moment. Let me fill up Basanti’s quota – feed her some fodder.”

Eventually, he decided he had waited long enough when there was not an inch to spare in the tonga. It was overflowing with men, women and children. First, he lit up his bidi and then exhorted Basanti to move. “Move Basanti”, he said and Basanti got going.

I asked him, “How long to Faleda?”

“An hour. Have you come here for the first time? Whose home you want to go to?”

“Which caste? Brahmin or Harijan?”

“Is in necessary to know the caste?”

“Saheb, the thing is there are two Dulichands in the village. One is a Harijan, another is a Brahmin.”

“Is it necessary to call them Harijan? Don’t Scheduled Castes have another name – like Dalit?”

“Nobody knows Dalit-Phalit here. If we don’t say Harijan, then we will say Bhangi.”

“I am asking because all the seven castes live in this village. All have their own settlements. If someone is new, I tell him the name of the settlement so that he doesn’t have trouble finding the place.”

“I have to go to the house of Dulichand Bhangi. Do give me the location,” I said casually.

“Yes, I will. You must have come from Delhi for his daughter’s wedding.”

The tonga driver smiled, “Saheb, Tikamchand tangawallah knows everything about the village. Dulichand’s son works in a bank in Delhi. You must be his friend.”

“Really, you know a lot about the village.”

“How would I not? I’ve been here for 25 years. When I was married into this village, I was 15. My in-laws didn’t have a son, so I became a “ghar jamai”. Then, turning towards a young woman seated on the tonga, he smiled and said, “Saheb, I am the ‘brother-in-law’ of the entire village.” The woman was quick to retort, “What sort of ‘brother-in-law’ are you? You don’t accept a rupee less in fare.” Another woman said from behind her veil, “Nandoi, you raise your fare very frequently. Just wait, I will deal with you on Holi.”

“Sister-in-law just tell me – should I starve your sister Nanad and her children? This wretched price rise will someday kill the poor.” He hit the mare again with the whip. It ran a bit faster for some time, before reverting to its usual pace.

I thought, if he knew so much about the village, I should ask him something about caste. I asked him, “Is casteism and the notion of higher and lower still prevalent? Has some change come about?”

“Much has changed. Earlier, no Brahmin or Thakur was ready to even sit with a Bhangi-Chamar. Now, just see my tonga. All the seven castes sit on it. The passengers sit side by side. No one has any objection …”

The veiled woman chipped in: “Upper caste, lower caste, these things have no meaning. Are Bhangis and Chamars not human beings? I am a Thakur but I have no issues with Bhangi-Chamars.” Addressing me, an old woman said, “Beta, earlier untouchability was very much there. Now, much has changed. The younger generation has become educated. They know all humans are the same.” An elderly man had been keeping quiet till then. He decided that he should also join the debate. He said, “What if things have changed. We have faced many an atrocity of the upper castes…to tell you the truth, poverty is at the root of everything. It forces a poor man to make compromises. Mahatma Gandhi is the name of this compulsion …” 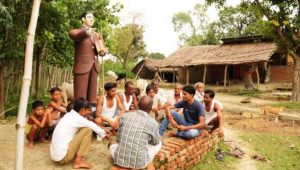 I responded, “But Baba, this is the era of Ambedkar and Ambedkarites. Now, no one is higher, no one is lower. Everyone is equal. Have you heard the name of Ambedkar?”

“Why not? I know he talked about ending caste. There is statue of his in our village.”

“But how we do without caste?” The tongawallah added, “I am a Gadaria by caste. I will marry my sons and daughters off into my caste. Not in a caste lower to mine. As for the upper castes, they will neither take my daughter in marriage nor give theirs.”

“There is one other thing,” the old woman said, “In olden times, work was divided according to caste. If caste goes, there will be many problems. If Bhangis will not clean, if dhobis won’t wash clothes, if chamars won’t make shoes, if barbers won’t cut hair, how will society run? I tell you, we cannot do without caste.”

The young woman retorted: “Give up these old ideas. The world has changed but you are stuck at the same place. In cities, no one gives any importance to caste.”

The old man sought to set the record straight, “Bitiya, cities are different. Villages have their own norms.” This emboldened the old woman. “What do you say? Ever since this cinema and video came, the new generation has acquired the ways of cities. They think that caste and religion are useless.”

The young woman felt the barb was aimed at her. She said, “Amma, do you know what is happening in the world around? You don’t listen to the news on radio, you don’t watch TV, you don’t read newspapers. Do you know, Mayawati, a Chamarin, has occupied the seat of the UP chief minister four times? You belong to olden times but you should keep also learn about the present world.”

The old woman muttered something under her breath. The tongawallah could no longer keep quiet. He said, “Saheb, I know little. I am not a wise man but I know one thing:

Says Kabir, listen my friend, only two rotis are everything

I am unlettered and am earning to just bring up my children.”

Amid all this chatter, we reached Faleda. Tongawallah and my co-passengers told me how to get to Dulichand’s place. I thanked all of them and got off.”

As I walked towards Dulichand’s home, I was sure that there was something that was forcing everyone to change.