Mudrarakshas’ classic work Dharmagranthon Ka Punarpath (Re-reading of religious scriptures) is a must-read for those who want to wipe the dust off their minds. It continues to be relevant today. The book, which is in its umpteenth edition, shows how deep, wide and forward-looking was Mudrarakshas’ scholarship and thought process.

The standout feature of the book is that the writer has taken great pains to ensure that his facts are authentic and unimpeachable. He has not allowed the fear of reproach or opprobrium to constrain his pen. The author has said absolutely nothing without a sound basis and has successfully knocked the base out of a brahmanical system that is thousands of years old. Mudra takes Ramvilas Sharma head on and blows his interpretation of Vedas and Mahabharata to smithereens. Few Hindi litterateurs could gather the courage to challenge Ramvilas Sharma and fewer still had the scholarship needed for it. Mudra’s analysis is sharp, incontrovertible and authentic because he closely studied the original texts Ramvilas quoted from and then proceeded to present what they really meant. (Dharmagranthon Ka Punarpath; Sahitya Upkram, 2009, page 221).

Another speciality of the book is that while interpreting religious scriptures, it takes into account the political, social and cultural milieu of the times in which they were written. Mudra tries to analyze their contents by first contextualizing them. He writes, “While translating or quoting from the Vedas, the contemporary cultural and social environment – which can be gleaned from all literature, including the Vedas – should be compulsorily taken into account” (ibid p 190). This approach not only helped create a historical perspective that is in consonance with the relevant era but also exposed the brahmanical totalitarianism, deceit, unholy alliance, cunning, debauchery and superiority complex – which have become so integrated with tradition that it is difficult to segregate them. The book is an eye-opener in the real sense of the term. It exposes the past in all its nakedness, and believe me, what it reveals is extremely shocking. Like a sharp saw, it cuts through our premises and beliefs. We always had our own suspicions about these texts and we have discussed these off and on but this is probably the first and the only book by a creative Hindi author that pulls down the mask over the so-called religious, cultural and literary gems. Let Acharya Namvar Singh and those of his tribe learn from Mudrarakshas how to discover the “second tradition”.

I am not aware of any other author or thinker who has written such an introspective and a historically accurate book in Hindi. So far, we have been told that Hindi is the language of the common man and their consciousness. But Mudrarakshas says something entirely different: “Hindi was the product of brahmanical sectarianism and bias” (ibid p 221). And then one thing leads to another.

Mudra’s book re-renders not only the scriptures but, through them, also our religious, political, cultural and literary traditions. He challenges us to face the fact that ours has been a violent, perverse and fiendish tradition, based on ideological, emotional and academic mishmash. He could do this because his point of departure was to try and explore the intent behind every work. Which group or class of people does it seek to address? Which craft or technique does it use to further the interests and aspirations of these groups?

Even as Mudra tries to determine the age of the ancient literary works, he also investigates their contemporariness. “In my view, the conclusive element in determining the era to which a work belongs is the socio-cultural need that led to its writing. Which hopes of the people of those times did a work fulfil and which elements it uses for this?” (ibid p 212)

Mudra examines the contemporariness of old texts in a no-holds-barred style. He also dwells on how they affected the subsequent times and who gained or lost because of them. From Vedas to the Brahmins scriptures, all who wrote them had a single motive – to establish the brahmanical system and to ensure its social, economic and political dominance. Some relevant quotes from the book would obviate the need for further elaboration.

The chapter titled “Gita Ka Punarpath” (Re-rendition of the Gita) of the book warrants special mention. It is divided into five sub-sections. The chapter can clear many cobwebs in our minds about the Gita. Mudrarakshas’ analysis of the Gita’s very famous and oft-quoted lines “Karmananyevadhikaraste ma phaleshu kadachana” (Do our duty, don’t worry about the reward) is amazing, historic (ibid p 197).

Mudra makes piercing and very revealing comments about Sanskrit literature. “Barring some exceptions like Mrachhakatikam, the Sanskrit literature that Bhas launched only used the themes of ancient Brahmin scriptures, Puranas and the epics to establish the supremacy of Brahmanical culture and rituals” (ibid p 174).

The book also exposes the bitter truth about the portrayal of women in Sanskrit literature. What is described as love in the Sanskrit literary texts is just a euphemism for lust. Mudra writes, “Probably due to the influence of Vatsayayan’s Kamasutra, carnal pleasures find a disproportionately large space in this literature. Even goddesses are presented as sources of unparalleled sexual enjoyment as in Kumarsambhavam and Geet Govindam” (ibid). In this respect, the most interesting speculation is that “The Brahmanical culture, that accorded a lowly place to women, may also be a believer in their commodification. After all, given the shameless conduct of Brahmins even with women of the status of queens in rituals like Ashvamedha yagna, this kind of attitude towards women in poetry cannot be considered unnatural.” This lust of the Brahmins manifests itself in the vulgarity of the Sanskrit literature,” (ibid).

Studying the status of women in ancient India through the scriptures is the main goal of this book. The destiny of other sections of the people – mainly the castes bunched together as Shudras – who were pushed to the margins of society by the Brahmins, is also a primary concern. In this respect, Mudra’s two conclusions are worth mentioning. The first is about the attitude of the scriptures towards women and non-savarna, indigenous inhabitants and the second is about how our leftists look at the problems of the Shudras:

Mudra contradicts the popular construct of the historians that the Aryans were outsiders. He presents a new, logical construct. He argues that it was the Brahmins who were outsiders and had come to Indian from somewhere else. Mudra says that Aryans were an indigenous aristocratic or leisure class, which was overwhelmed by the Brahmins using religious superstitions and rituals. This made Brahmins the dominant class. Another novel construct is that there were no Shudras in the land of India. Brahmins, using the services of the political and economic power-wielders of the time – who were under their thumb – branded all the toiling masses, including farmers and artisans, as Shudras and pushed them to the margins. They were forced to lead horrific lives generation after generation and were deprived of all their political, social, cultural and even human rights. It is not without reason that this book consistently compares the Brahmins, who came to India from outside and established their rule here, with the British. Just as the British used culture as a weapon to establish their hegemony, so did the Brahmins. Mudra writes, “After they had established their rule in India, the British used culture as the means for strengthening its rule. Slowly, they started interfering in theatre, literature, and the educational, administrative and economic system. The Brahmins did exactly the same thing” (ibid p 175).

In the end, it would be pertinent to refer to two new phrases that Mudra used. The first is “Social Darwinism” (ibid p 150) and the second, “making society minor” (ibid p 151). He has used both these phrases in the chapter titled “Upanishad Punarikshan” to describe what the Brahmins did. Whatever the Social Darwinist thinkers, the patrons of capitalism, did in the 20th century as part of their anti-left campaign to subvert socio-economic equality, Brahmin thinkers had already done in pre-Buddhist and post-Buddhist eras (ibid p 150-151).

This book is an excellent example of re-examination and rewriting of history using time as the touchstone.

Shambhu Gupt is professor in the Department of Women’s Studies, Mahatma Gandhi Antarrashtriya Hindi Vishwavidyalaya. Gupt has published eight books on literary criticism and is a recipient of Ramvilas Sharma Aalochana Puraskar and Spandan Aalochana Puraskar. 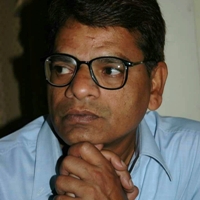 Shambhu Gupt is professor in the Department of Women’s Studies, Mahatma Gandhi Antarrashtriya Hindi Vishwavidyalaya. Gupt has published eight books on literary criticism and is a recipient of Ramvilas Sharma Aalochana Puraskar and Spandan Aalochana Puraskar.