When one of the leading personalities of India’s Tribal movement, Shibu Soren entered politics, he left a mark. This was undeniably significant. It was Shibu Soren who scripted the political success of the movement launched by the great Tribal heroes like Birsa Munda to protect land, water and forests. Now in his late seventies, Dishom Guru is no longer active in politics, mainly due to his failing health. But, on the ground, he is still fighting. On 10 December 2016, at his farmhouse in Cheerachaas, near Bokaro, Shibu Soren answered all of Nawal Kishore Kumar’s questions in his trademark matter-of-fact style.

Why do people address you as Dishom Guru? Any special reason?

I am myself not sure why I am called Dishom Guru. I don’t know who gave this title to me. What I know is that the word “Dishom” means “country” or “the world”.

You had a difficult childhood. Your father Sobran Soren was murdered when you were very young. Would you like to share your childhood memories with us?

It was a long time ago. At the time, my elder brother Raja Ram Soren and I were studying. We were staying in a hostel in Gola. The rest of my three brothers and two sisters lived with my father, who was a teacher at a school at Barlanga, about 3-4km from my village Nemra.

The village was not linked by a pucca road. On the morning of 27 November 1975, my father left for Gola to meet us. On the way, some people attacked him with an axe. He died on the spot. The family members came to know of the incident many hours later. Late in the evening, we brothers were told about it and we too reached the spot. My father’s death pushed our family into an economic crisis. Even when my father was alive, we were not exactly well off. His salary was Rs30 per month. Now teachers get paid in the thousands but still the education today is worse than what it was then. My father not only taught in the school but also awakened the Tribals, especially against the Shylockian moneylenders. He had launched a movement against them.

The moneylenders used to trap the Tribals into accepting paddy offered by them. Then, as soon as the paddy in the farms was ready for harvesting, they used to show up to take back their paddy. The result was that the farmers were left with so little paddy that they had to go back to the moneylenders to get more – this time on loan. And then that loan could never be repaid. It was just transferred from the fathers to the sons. I remember that the moneylenders took away 15-20 “mans” (traditional unit of weight used in British India equivalent to 37 kg) of paddy every year. My father opposed this practice. A meeting was organized and it was decided that a protest should be mounted outside Badka, the village of the moneylenders. My father was the leader of the struggle. He was very knowledgeable. Even government officials used to come to him for advice. Before the protest, my father told the Tribals that none of them should enter the moneylenders’ village, harass women or use bow and arrow. The local police station was also informed in advance. It was decided that no one would henceforth accept paddy from the moneylenders, nor give paddy to them. But the moneylenders were very shrewd. Their agents were active in the village. But nothing worked with my father and the movement against the moneylenders spread in the entire area. 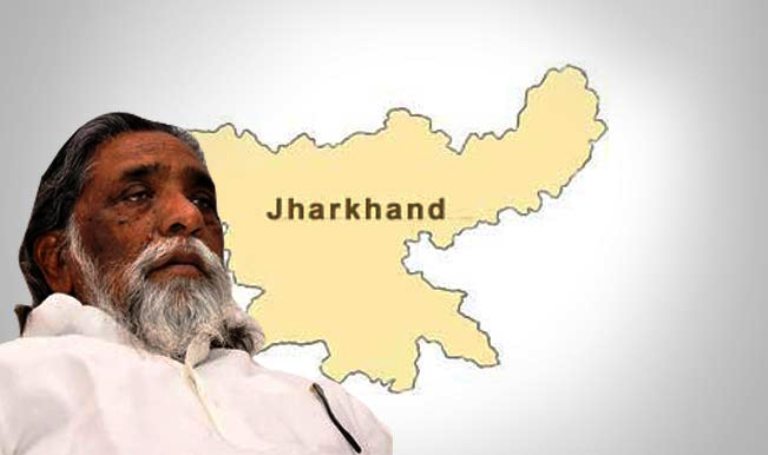 Was the struggle of the Tribals in those days only against moneylenders and “dikus” (Hindi for outsiders)? Or, were there other dimensions to it?

The moneylenders were not easy to conquer. They were educated and had access to the government officials and the police. But the struggle was not limited to the moneylenders. It was basically a struggle for water, forests and land, which were being usurped by non-tribals at an increasingly fast pace. Post Independence, the Equal Rents Act gave a fillip to this loot. At the time, Jharkhand was still part of Bihar and the mineral wealth of the area was transported to other parts of the country. It was exactly what the British did in India during their rule. They ferried away India’s natural wealth to their country. In my view, if India was a “Sone Ki Chidiya” (golden bird), the reason was the mineral wealth of Jharkhand and other Tribal areas. It is unfortunate that this loot did not end even after Independence. Before our very eyes, our land was cut open and its wealth was carted away. But we were helpless. We could do nothing to stop this loot.

What persuaded you to join forces with N.E. Hori to launch the political movement for a separate Jharkhand state?

I would like to clarify that I was miles away from politics at the outset. After the murder of my father, my mother somehow educated us brothers and sisters by selling her jewellery. I had attended Hori’s public meetings many times but I never took membership of his party. He was fighting for a separate Jharkhand state. We were with him in this battle. Just as Odisha was separated from Bihar in 1935, Jharkhand had to be carved out of Bihar – that’s what all of us wanted. There were historical, social and political reasons for it. The leaders of Bihar used to ignore the interests of Jharkhand.

The Chirudih incident is considered a milestone in the struggle for separate Jharkhand. Your take?

The Chirudih incident and Kukdo incident in Giridih proved very significant, although both were born out of the struggle against the moneylenders. The Tribals were being deprived of their rights. And when they protested, they were victimized. The rulers sitting in Patna were least interested in Tribal rights. Both the incidents proved that the Tribals would no longer remain silent.

How much was the Jharkhand movement influenced by the Naxal movement?

Our struggle was for land. But in the plains, the struggle assumed a different form. Here, we were owners of our fields but attempts were being made to dislodge us. The members of red parties were with us, so were those of other parties. All of them wanted the people of Jharkhand to get their rights. But the Naxal movement was never as influential in Jharkhand as it was in central Bihar. No massacres took place here. Caste differences and conflicts were also not that sharp. But that does not mean we did not have our own challenges and problems. A violent battle was waged here too, but Tribals fought it in their own way.

When you were fighting for a separate Jharkhand state in Patna and Delhi, some of your associates parted ways with you. It was said that Lalu Prasad had divided your party into many factions. How did that happen?

See, there were no differences as to the objectives of our movement. All of us were fighting for a separate Jharkhand state. But in politics, it sometimes happens that co-travellers go their own ways for one reason or the other. However, that does not affect the movement. And in this case, this was not battle of any individual. It was a battle of all the residents of Jharkhand – Tribals and non-tribals. All were with this movement. 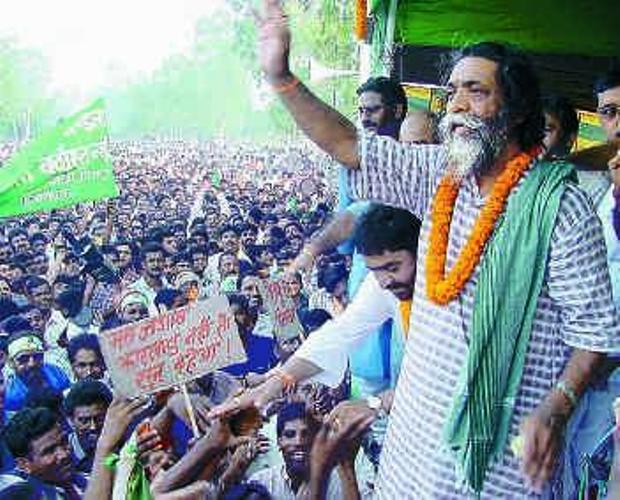 How is your relationship with Lalu Prasad?

We had made Lalu Prasad the chief minister of Bihar. We had supported him. We had ideological affinity with him in the sense that we both stood for changing the lives of the deprived. Even today, I have a good relationship with Lalu.

But Lalu Prasad once said that Jharkhand would come into existence over his dead body.

At that time, the battle was at its decisive stage and everyone was playing his politics. What somebody said and what somebody heard is not important. What is important that Jharkhand came into being, and that too by consensus.

Do you think that statehood had brought about development in Jharkhand?

Things are not that simple. But changes are coming about. As far as Jharkhand’s interests are concerned, mining companies are still looting us. Over 70 per cent of the mineral wealth is under the control of the Government of India. Isn’t it strange that the Government of India claims that even though the land which is mined to extract coal does not belong to it, but the coal does? This is nothing but blatant loot. Another thing is that Jharkhand is still incomplete. The Medinipur, Bankura and Purulia districts of West Bengal should also be included in Jharkhand. These districts have a Tribal majority. It would not be wrong to say that our battle is far from over.

In your view, how have the challenges confronting the Tribals changed since Independence and now in the 21st century?

The basic issues remain the same – water, forests and land. The Chota Nagpur Tenancy Act, which helped preserve the land rights of the Tribals, is being abrogated. Our battle is a big and long one. We will take it forward under any circumstances. We will ensure that the governments’ efforts to take over the land of the Tribals fail.

You say that the Tribals of Jharkhand are still fighting for land, forests and water. You and your son Hemant Soren have been the chief ministers of Jharkhand, so has Jharkhand Vikas Morcha’s Babulal Marandi. The All India Jharkhand Students’ Union is a partner in the present Raghuvardas Government. Don’t you think Tribal issues have not been on the priority list of political parties like JMM, JYM and AJSU?

You should see things in their whole. The Tribals, as a community, are still educationally and economically backward. They are not as shrewd as the BJP [Bharatiya Janata Party] people. The BJP people are educated and have managed to fool the Tribals. But now the Tribals have awakened. They can identify their protectors and their enemies.

You had taken many initiatives for protecting the cultural identity of the Tribals. But now Tribals seem to be drawn towards Christianity. Others are adopting Hinduism. The tribal culture is on the verge of extinction. What do you have to say about this?

I believe that the religion of the Tribals is the best. They should not associate themselves with any other religion. The tribal culture is the culture of preservation of nature. We worship land, forests and water. This is our culture. When I was the chief minister I had refused to participate in the Ravana Dahan programme. I still believe that the Tribals will be safe only once their religion is safe.

You have been accused of promoting your family in politics? Do you have anything to say?

(Laughing). Who will do politics? Will some dog come to do politics? When a farmer’s son does farming, when a judge’s son becomes a judge, why does this question not crop up? Just give me the name of a political party in which this is not happening. I believe that there is nothing wrong in a politician’s son entering politics. After all, it is the people who are the final arbiters. They will elect the person they like – he could be an ordinary person or the son or daughter of a politician. In a democracy, everyone has the right to enter politics.