There are reports that the statues of the heroes of the elite will soon adorn the Ambedkar Park in Lucknow. India has a centuries-old tradition of idol worship. It has struck such deep roots that a big section of society has started believing that idols are gods. One who believes that the idols are the be-all and end-all gives a go-by to reason and logic. He cannot decide what is good and what is bad for him. He becomes a slave of the designs of others. Idol worship does not deprive him of only modern wisdom but also of ancient wisdom. That is why the pro-change groups and intellectuals are duty-bound to oppose idol worship. 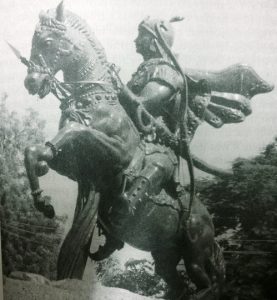 A statue of King Suhaldev Rajbhar

In the last Uttar Pradesh elections, the BJP received a sizeable chunk of the Dalit votes and the Most Backward Castes (MBCs) voted for it en bloc. Its bumper victory was the outcome of the divisions among the Dalits and the OBCs. No wonder the BJP wants to keep the equations intact to ensure that it romps home in 2019, too. The groundwork for the installation of the statue of Raja Suhaldev began on 14 May 2017, when, addressing a programme organized by the Vishwa Hindu Parishad (VHP), Chief minister Yogi Adityanath described Suhaldev as a Pasi king. The Rajbhar community took it as an assault on its identity. Three days later, they took to the streets. It seemed as if everything was orchestrated. A couple of days later, the chief minister visited the Ambedkar Park and announced that a statue of Suhaldev would come up there. Omprakash Rajbhar, minister for Backward Classes’ Welfare in the UP government, saw in this development a grand opportunity to please the party high command. So, without wasting any time, he announced that besides Raja Suhaldev, the statues of Maharana Pratap and Chhattrapati Shivaji – whom the Sangh brotherhood adores – would also be installed in the Park. It would have been suicidal for the BJP to ignore the Rajbhar community, which forms almost 18 per cent of the population in eastern Uttar Pradesh. The chief minister, of course, never apologized for his statement, for that could have offended the Pasis.

Since Independence, the votes of the Rajbhars have been getting divided among different political parties. But in the recent UP elections, they voted en masse for the BJP. If merely installing a statue could appease them, it would not be a bad deal. The Rajbhars are one of the most deprived and the poorest communities. It would have been better had the central and state governments taken steps to solve the basic problems facing them. That would have been in consonance with the democratic principles. But the ideology that the BJP represents believes in making people intellectually bankrupt, rather than democratically empowered. Its choice this time was in keeping with its strategy. 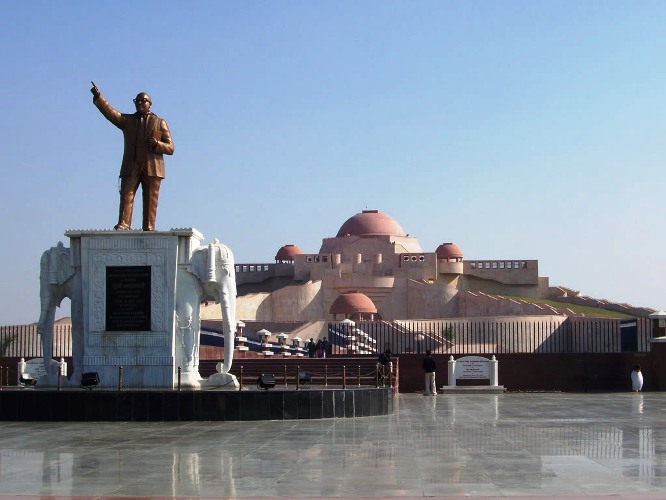 The statue of Ambedkar, the drafter of the Constitution, at Ambedkar Park in Lucknow

Why only Suhaldev (995-1060AD)? Indian historians have not written much about this 11th-century ruler. His Shudra credentials had everything to do with him being ignored. He finds no mention in the annals of history for 900 years – this, when Persian writer Abdur Rahman Chishti, had described the battle between Raja Suhaldev and Salar Masud in his book Miran-e-Masudi, written in the 17th century. Salar was the nephew of Mahmud of Ghazi. He had set foot in India when he was 16 – as an invader. He fought a series of battles here, which were aimed at establishing Islam in this land, and that won him the title of Ghazi. He is also said to have destroyed the famed idols in the Somnath temple. After running riot in Delhi and Meerut, he marched towards Bahraich. When Suhaldev, the king of Shravasti, heard the news, he drew up a strategy to counter him. He forged a union with his neighbouring states. The battle between Salar Masud and a combined army of many states under the leadership of Suhaldev lasted a month. Both the sides sustained massive casualties. Salar Masud was injured, and succumbed. His tomb is at Bahraich, where he is known as Ghazi Masud. Chishti, who was a contemporary of Emperor Jehangir, testified to “Salar Masud’s historicity, his advent into India and his martyrdom here. But no authoritative historical text mentions this event.” (The History of India, as Told by its Own Historians: Muhammadan Period). It is said that the author of the book had extensively researched on Salar Masud before writing his book. It was during this research that he came across a book by Mulla Mohammad Ghaznavi, who was a servitor of Sultan Mohammad Subuktigin. He had also served Salar Masud and his son for some time.

This was a story about the resistance to the initial forays of Muslim invaders into India. Still, the class which claimed to be at the pinnacle of society owing to its “scholarship” and whose descendants are the advocates of Hindutva today did not preserve the memories of Raja Suhaldev, who had vanquished Ghazi Salar Masud. The Indian historians remembered Suhaldev in the 20th century, when Independence seemed close at hand. 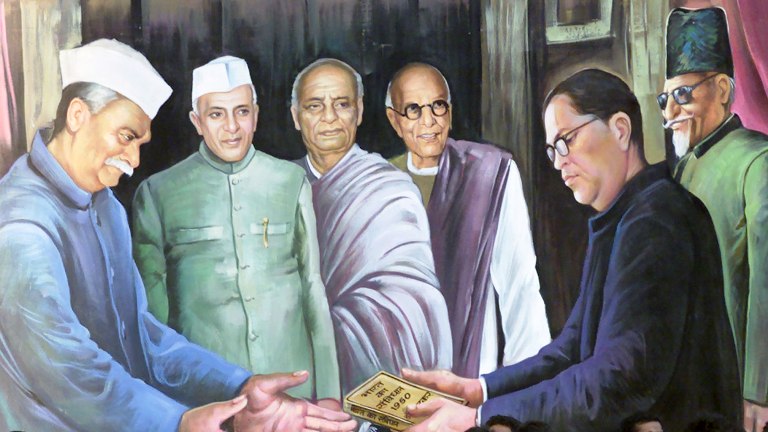 Different political outfits were engaged in a bitter battle for wresting control over the levers of power in independent India. At the time, they sought to give a communal colour to the story of Suhaldev. They projected him as a protector of Gau Mata. They fabricated events to suit that narrative. One of them was that since Hindu soldiers would not kill cows, Salar Masud tied them at the entrance to his military camp. When Suhaldev came to know of this, he was perturbed. But then he found a way out. Before the battle could begin, he launched an attack on Masud’s camp and freed the cows. In the battle that followed, Suhaldev inflicted a crushing defeat on Salar Masud. Needless to say, this story is mere fiction. But it is this myth that makes Suheldev relevant and useful for the rulers of today. They say that Salar Masud destroyed the idols in the Surya Mandir of Somnath and Muslims consider him a Ghazi and a martyr. But there are also those who believe that Salar Masud was a Pir and pay obeisance at his mazar.

We live in a society that is an admixture of many identities. If someone considers Maharana Pratap his idol, he has every right to desire and demand the installation of his statue. There is no dearth of Maharana Pratap’s statues in the country. Over the last couple of decades, the practice of installing welcome arches and gates at entry to the villages has gained ground. One can see the statues of Maharana Pratap, riding his equally famous Chetak, outside many Thakur-dominated villages. This gives an idea of the balance of power in the village. In Rajasthan, an exercise has been launched to rewrite history to glorify Maharana Pratap’s valour. In some villages, especially in the Dalit settlements, you can find a statue of Ambedkar. It symbolizes the rising aspirations of this class of people and also indicates that grinding poverty must be the overwhelming feature of that area.

Why a Maharana Pratap statue in Ambedkar Park? Can the struggle of Maharana Pratap and Suhaldev be compared to that of Mahatma Phule, Periyar and Dr Ambedkar for the Dalitbahujans? There is a fundamental difference between the struggles led by Maharana Pratap and those fought by the others. That difference is also of modernity and tradition. The struggles of the Phule couple, Ambedkar, Periyar, Kanshiram, etc, were centred on social justice and was democratic. It helped in the building of a modern society. Maharana Pratap, Suhaldev and for that matter even Shivaji were patrons of feudalism and monarchy. Their greatness should be assessed in terms of history and their stories told to the children as history. People can draw inspiration from them. 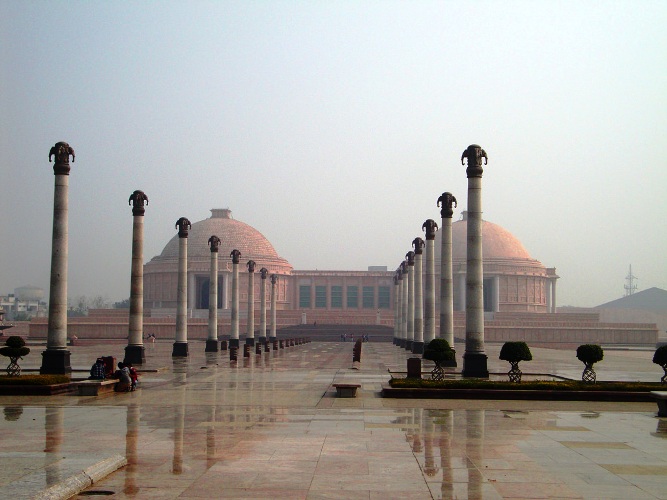 But if we have to ensure that justice and democracy prospers in this country, we need to educate our children in the various forms of democratic struggles. That is why there is no point in erecting a statue of Maharana Pratap by the side of the statues of Ambedkar and Phule. They were worlds apart.

Of course, the chief minister of Uttar Pradesh can argue that installing statues of Raja Suhaldev and Maharana Pratap, beside the statues of Bahujan heroes at Ambedkar Park, would send out the message of equality, harmony and unity and would lessen the prevailing alienation of different communities. The chief minister’s announcement did not mention anything about the metal to be used for building the statues or their size but Omprakash Rajbhar has said that Suhaldev’s statue will be at least five feet higher than that of Mayawati. You can try to solve this mathematical conundrum. If the statue of Suhaldev (Shudra) will be five feet higher than that of Mayawati (Dalit), what will be the height of the statue of Maharana Pratap (Kshatriya)? The honourable minister may not have grasped the significance of this difference in heights but the savarnas, who are trying to use Suhaldev to further their politics, understand it pretty well. This is a not a new stratagem. Arya Samaj used it extensively in its early days to Sanskritize the MBCs to counter religious conversions. The BJP only intends to strengthen this process.

The governments led by the elite ignore the aspiration for change till it becomes an essential part of the consciousness of the groups concerned. Ideologies play an important role in deciding the direction of change. That is why those at the helm of affairs are wary of both change and the thoughts that fan the desire for change. They create myths to stop the winds of change, to change their direction – myths which induce inertia among the people, which turn them retrograde. The building of statues is one such move. Suhaldev’s suddenly gaining prominence should be seen in this context. What is happening is the antithesis of the dreams and the resolutions of independent India. One of them was that India would pursue democratic ideals. But since Independence, Gandhi lies buried in Rajghat and the Constitution’s spirit has been lost in the mayhem in Parliament.