Implications of presenting mythology as history

To rewrite Indian history, particularly the ancient history of the subcontinent, the Government of India has formed a 14-member committee. This begs the question: what is the objective behind re-rendering the ancient history of India? Forward Press has already published a series of articles on this issue earlier. This is the second time Ish Mishra, an associate professor in Delhi University, is contributing to the series.

The proponents of Brahmanism and Varnashram Dharma have coloured history with mythology and divinity, to cover up the inhuman contradictions of Varnashrama Dharma. The Puranas are a result of the mythicizing of history. Hence, to dig out history from mythology it is imperative to de-mythicize it, that is, to remove the veneer of divinity and to expose its reality. Even their periodization is part of the mythicizing and is beyond time and space.

How and when did the Satyug – when slave trading was the norm – give way to the Tretayug? Vishwamitra figures in both the eras. Did the story of Harishchandra and Vishwamitra unfold during the transitional period between the two eras? 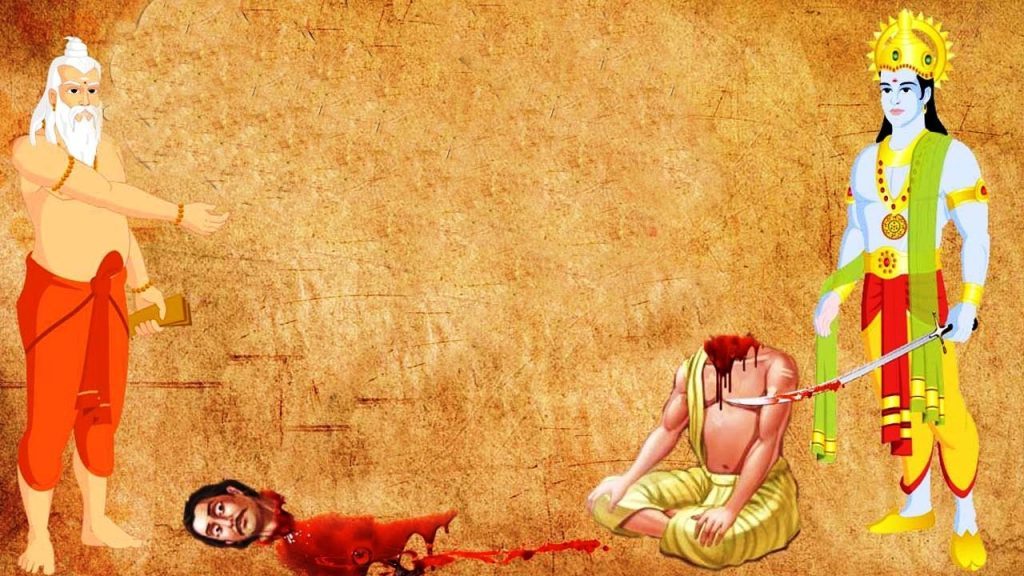 Shambuk is in meditation on the instruction of his guru, Vashisht, but then Ram arrives and beheads him

A well-known story is that of Raja Harishchandra, who first offered his kingdom as dakshina to Vishwamitra and then sold off himself and his wife in the slave market to pay further dakshina to the sage. There is hardly any need to go into the implications of this story that underlines the importance of dakshina. Ramayana says that another central character Parshuram lived in the Tretayug while according to Mahabharata, he lived in the Dwaparyug. Did merely 50-100 years separate the bloodsheds of Ramayana and the Mahabharata? Or did the “matricidal” Parshuram live for thousands of years?

Only two characters of the Ramayana – Vishwamitra and Vashishtha – find mention in Rigvedic literature. The Rigvedic Aryans populated the Sapta Sindhu (Punjab’s five rivers and Sindhu and Saraswati rivers) region and were divided into several Janas (clans)[1]. Vishwamitra was the chief priest of the king, Dibodas, of the Bharat clan. Following Dibodas’ death, his son Sudas took over. Trouble brewed after Sudas replaced Vishwamitra with Vashistha as the chief priest. An incensed Vishwamitra attacked Sudas’ clan, along with the kings of ten other clans. Though Sudas emerged victorious, the two warring groups struck a compromise and both Vashistha and Vishwamitra were appointed the priests of the Bharat Jana. 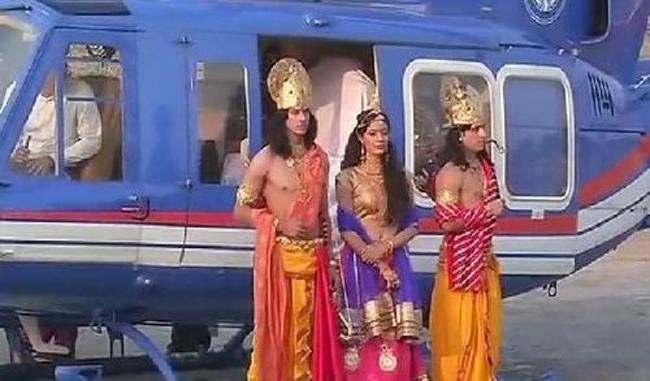 On Diwali 2017, the Uttar Pradesh government had ‘Ram, Sita and Laxman’ flown into Ayodhya in a helicopter ( ‘the pushpak biman’)

The seventh Mandal of the Rig Veda describes the battle. It tells readers how many Aryan clans there were and the areas of the Earth they ruled. The battle, called Dasraghya Yuddha, was waged in Punjab, near the Parushni (Ravi) River[2].

What this means is that the Ramayana could either have been written before or after the Rigvedic era. It couldn’t have been before because the urban Harappan civilization had a script, which is yet to be deciphered. In any case, our Rigvedic pastoral ancestors used to look down upon urban civilizations. Even Indra, who was famously called Puranadar, or the destroyer of cities, couldn’t possibly have had any knowledge of or association with present-day Ayodhya, as his existence was confined to the Saptasindhu region.

On the basis of archaeological and literary evidence, most historians consider the period of the Vedic era to be from 3000 to 1000 BC. After Saraswati River dried up, the descendants of the Rigvedic people moved east and by the time of Buddha, they had spread up to the Ganga valley and beyond.

A well-known fact is that the Rigvedic Aryans were nature-worshippers. Brahma, Vishnu and Mahesh are not even mentioned in the Rig Veda. So, when there was no Vishnu in the Vedic era, the question of his incarnations does not arise. When there was no Ram, an incarnation of Vishnu, how could there have been the Ramayana? After all, thoughts are the abstraction of a thing. 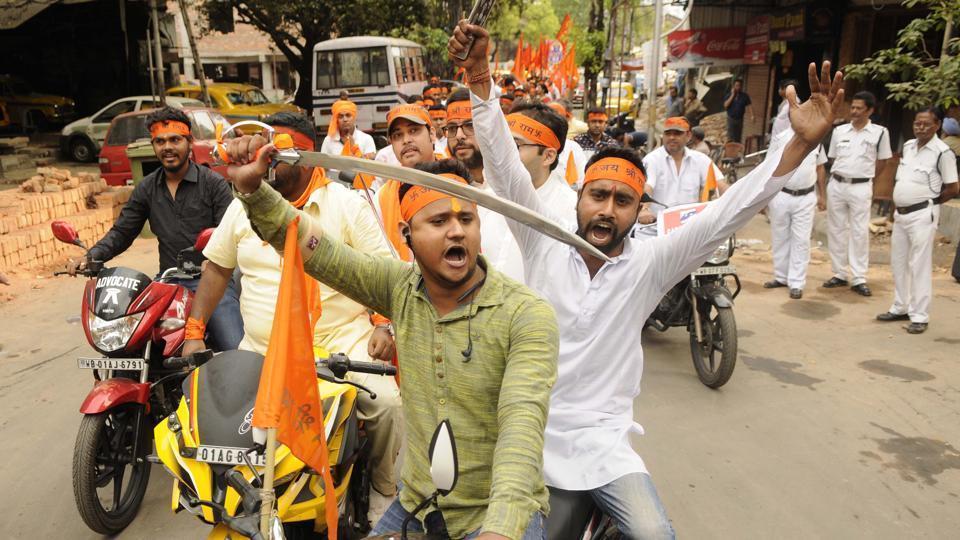 Kautilya, the writer of Arthashastra, a classic treatise on statecraft, is believed to have lived sometime between the third and the fourth centuries BC. He was a very systematic and disciplined writer. In Arthashastra, before proffering his opinion on any issue, he describes all the contemporary views on it as “Nesti Kautilya”, that is, “Kautilya is not saying this”. Then, after analyzing the other views and theories, he comes up with his own ideas and writes it as “Iti Kautilya”, that is, “this is what Kautilya says”. There is no mention of the Ramayana or of the Mahabharata or any of their characters in the Arthashastra.

A firm advocate of the Varnashram system, Kautilya lists ensuring protection and wellbeing of the subjects as well as strict adherence to the Varnasharam Dharma as the duties of the king. But his treatise refers only to Vedic gods and the forces of nature as objects of reverence. He never mentions Brahma, Vishnu and Mahesh as the creator, preserver and destroyer of the cosmos. So, it emerges that the concept of the triad of deities emerged after Kautilya. In the light of this fact, the “historicity” and “ancientness” of the Tretayuga and of Vishnu reincarnating to destroy the Rakshas – who allegedly obstructed yagnas and other rituals conducted by the rishi and munis (ascetics) – sounds as laughable as the signboard over a recently built temple being “ancient”. 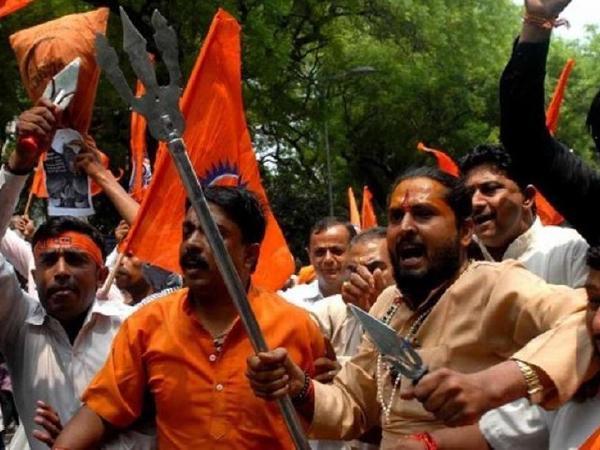 In Bhagalpur, Bihar, RSS workers were engaged in violence

In the Vedic and post-Vedic literature before Buddha, there is no reference to any theory of the State. The first theory on the origin, powers and role of the State (social contract) is found in the Buddhist treatise Deeghnikay. Prior to that, the Aiteraya Brahman describes gods choosing Indra as their king in the battle against the powerful Asuras[3]. The theory of the State finds no mention in the Vedic and post-Vedic literature because transition from the tribal system to the institution of State as the administrator over a particular geographical area happened over an extended period of time. By the time of Buddha, the institution of State had gained wide currency, with the founding of the Mahajanpadas and the kingdoms of Kashi, Kaushal and Magadha and the coming into being of the post-Vedic republics, north of the Ganga. To repeat the point, thoughts are the abstraction of a thing. Obviously, when there were no kingdoms, there was no question of a god being born as the prince of a royal family.

A major section of intellectuals now hold the view that the Puranic tale of the Sur-Asur battle is the mythicization of the struggle between the Aryans and the non-Aryans. Buddha posed the first powerful challenge to the domination of the Brahmanical ideology and rituals. Buddha’s sermons imbued the people with a new consciousness that became a potent threat to the very existence of Brahmanism. Emperor Ashoka’s political and financial patronage led to the teachings of Buddha spreading far and wide, and in the ideological battle that followed, Buddhist knowledge and discussions and dialogues on it became the mainstream of the democratic education system. 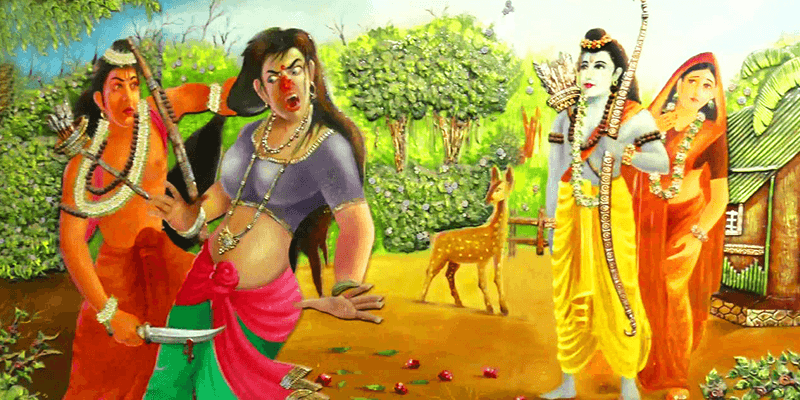 Even the last Mauryan Emperor was assassinated by his Brahmin general, Pushyamitra Shunga, who then launched a bloody crusade against Buddhist sermonizers and institutions. The destruction of Buddhist institutions and literature was so complete that Rahul Sankrityayan had to use mules to bring Buddhist treatises to India from Tibet. After the bloody anti-Buddhism crusade, the Ramayana, the Mahabharata and Manusmriti were written sometime between second century BC and second century AD to legitimize the brahmanical dominance. There is no scope or need for going into the details of this exercise but suffice it to say that Brahmanism destroyed Buddhist knowledge and traditions, established its monopoly over knowledge and accorded mythology the status of history to perpetuate its dominance. The need of the hour is to understand the real history by de-mythicizing the Puranas; instead, the RSS is out to push society into the past of brahmanical dominance by re-mythicizing history.

Implications of considering the Ramayana as exemplary history

Every literary work has a purpose. What is the purpose of the Ramayana? Which ideal of morality and social conduct does it set? It is well known that the virtues of Ram, the hero of the Ramayana, are considered exemplary and he is hailed as Maryada Purushottam (the supreme upholder of Dharma). Let us see which ideals this character embodies:

Thus, we find cornerstones of brahmanical dominance: the determination of a personality by birth and the mythicizing of history. But both these cornerstones stand exposed in the light of history, and Bahujans have started putting out alternative interpretations of myths. Against this backdrop, the RSS-backed government’s attempt to rewrite history reflects the frustration of Brahmanism, which is fast losing its hold on society. As a Hindi saying goes, a lamp shines the brightest before it is extinguished.