Ever since the Bharatiya Janata Party (BJP)-led regime took charge of Jawaharlal Nehru University by appointing M. Jagadesh Kumar as its new vice-chancellor, it has demonized this prestigious university as a “den of anti-nationals”. Other Hindutva blows included attempts to dismantle its secular and progressive character, accelerate the already ongoing privatization and scuttle the already shrinking democratic and dissenting spaces. Moreover, it has replaced the more vibrant GSCASH (a panel that looked into cases of sexual harassment and worked for gender sensitization) with the toothless and puppet ICC (Internal Complaints Committee). But, perhaps, the worst of all these interventions has been its attempt to undermine reservations – and therefore social justice. As a result, the future of the students from marginalized sections ­– both those already enrolled in JNU and others who aspire to be part of the student community here – appears bleak. 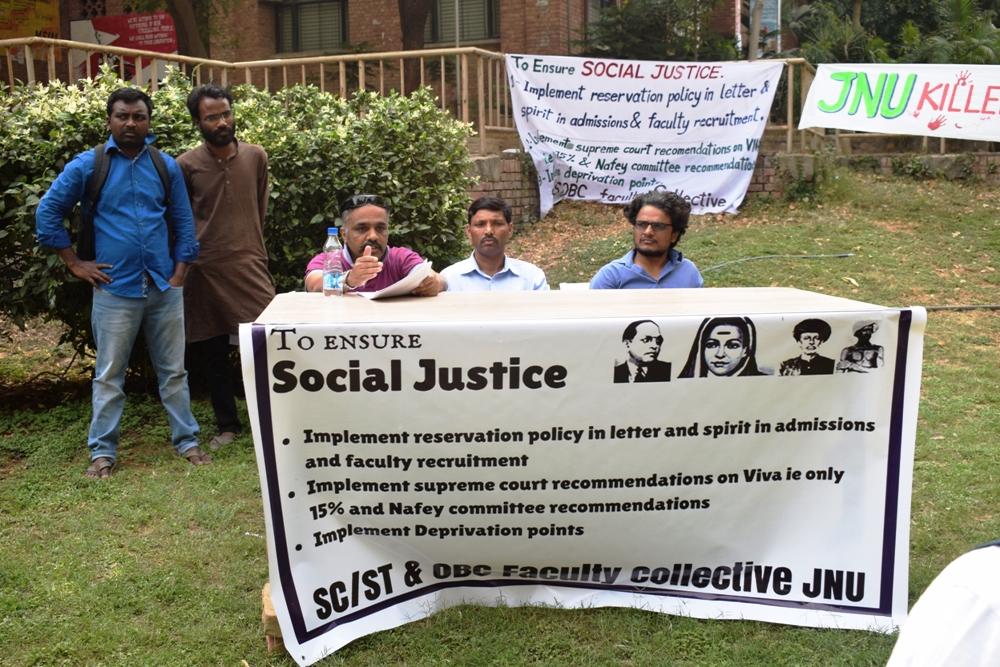 At the heart of the attempts to undercut reservations and social justice has been the new admission policy that the vice-chancellor has imposed on the university. Students and teachers have been opposed to this policy from the beginning and are still resisting it because its provisions, if not rejected, would deny admission to students from the marginalized sections. Under the new policy, the admission process is interview-centric. Good marks in the written exam merely qualify the candidates for the interview and have no bearing on the final selection. It also makes it mandatory for each and every student, irrespective of their social background and domicile, to secure 50 per cent marks in the written exam in order to be called for the interview. Moreover, the new admission policy has drastically reduced the number of seats for MPhil and PhD programmes. For the current academic year, only 159 candidates were granted admission, compared to 970 candidates for the previous year. The administration cited the low teacher-research scholar ratio to justify the “seat-cuts” even after the teachers said the intake of research scholars then was perfectly manageable.

Vice-Chancellor Kumar says that the new admission policy is based on the University Grants Commission’s gazette published on 5 May 2016. What he is not willing to accept is that the UGC Gazette is just a guideline and he, as the vice-chancellor, can accept or reject it, keeping in mind the particular requirements and nature of the university. Students, teachers and scholars of repute have raised doubts over the new admission policy but he remains deaf to their reasoned arguments, forcing the students to protest by holding strikes and staging blockades. Braving all kinds of harassment, even FIRs filed against them, students have continued to protest. Last week, they took out a long march to Parliament, which ended in a police lathi-charge. At the time of writing this piece, academic activities in JNU have been crippled as the total lockdown (talabandi) enters its third week.

Realizing the gravity of the situation, students from marginalized sections of society have formed a new forum known as SC/ST/OBC/PWD (Scheduled Caste/Scheduled Tribe/Other Backward Classes/Persons with Disabilities) students and teachers of JNU. Addressing a press conference, the forum rightly termed the new admission policy an “attack” on the Indian Constitution. The forum also accused the JNU administration of misleading people about the impact of the new admission policy on reservations. Contradicting JNU administration’s claim, the forum presented data to underscore violation of the Constitutional guidelines for reservation. According to a press release of the forum, “In the MPhil/PhD admissions for year 2017-18, the reservation for SC was 1.3 per cent rather than the mandated 15 per cent, ST was 0.6 per cent rather than the mandated 7.5 per cent, OBC was 8.2 per cent rather than 27 per cent and PWD was 0.3 per cent rather than the mandated 3 per cent.” Earlier in her article in the website Kafila (18 February 2018), JNU professor Nivedita Menon also expressed grave concern about the violation of reservation guidelines. “The 2017-18 MPhil/PhD admissions to JNU”, as she wrote, “have seen an overall 83% cut from the previous year. Actual admissions are reported to be less than 100 out of 194 seats. Intake for 2018-19 is projected to be just a little more than 50% of the 2016 values.”

Access to education, particularly in the Phule-Ambedkar tradition, is the road to liberation. As Phule argued in Slavery (1873), the Brahmins could maintain their dominant position only because they forcefully deprived the Shudras and Ati-Shudras of education. Isn’t the new admission policy a re-establishment of the old order?

The students and teachers from marginalized sections see the new admission policy as a big threat to their democratic rights. However, the brahmanical-corporate media has largely ignored their resistance. Instead of foregrounding the issue of reservation, the media has been propagating a narrative that students’ opposition to compulsory attendance is their opposition to being held “accountable”. 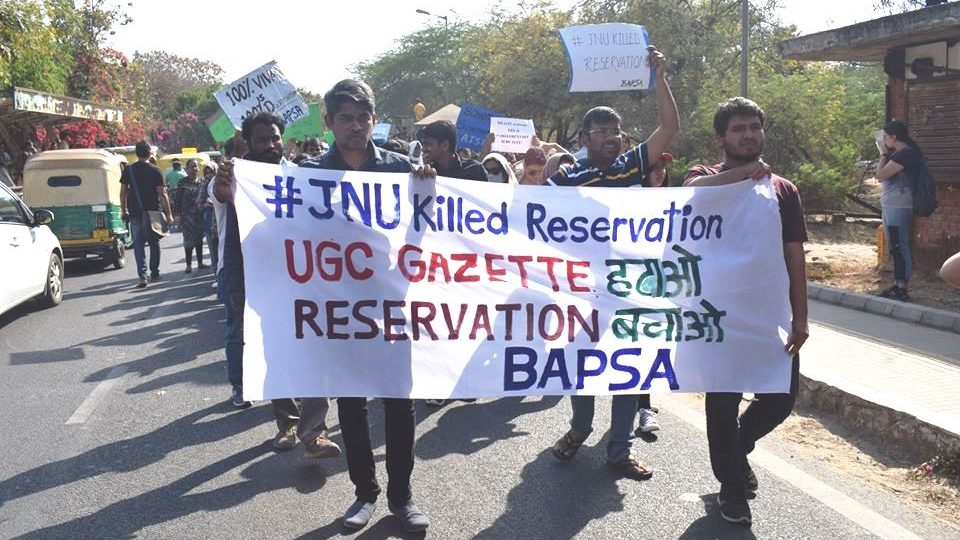 At the protest venue, in the School of Social Science (II) at midnight on Saturday, students were worried about their future. One of them said, “Reservation is a tonic. Had I not had it, I would have never made it to JNU.” Another had this to say: “Since we come from marginalized sections, we are discriminated against so much. If reservation had not been in place, I would have never come to JNU.”

The protesting students lamented that the opponents of reservation had never tried to understand the philosophy behind it. The opponents wrongly argue that reservations should be done away with because the “meritorious” people face “reverse-discrimination”. Another misconception is that reservation is not the right of the marginalized people; rather, it is “uphar” (gift) given to them by the State. On the contrary, the basic purpose of reservation is to ensure representation of the deprived sections in all sectors of the nation, especially among those who make decisions and execute them. This aside, reservation is needed to ensure equal participation and protection from discrimination in a caste-based Indian society.

Ambedkar was one of the most powerful theoreticians of caste. He persuasively argued how divisions in Indian society along caste lines thwarted the emergence of both fraternity and nationhood. The fallout of a caste-based society, Babasaheb Ambedkar said, has been that the majority will never take care of the interests of minorities. Put differently, if people from all sections are not given representation in the key sectors of a nation, the interests of weaker sections will be jeopardized. In his book, Mr Gandhi and the Emancipation of the Untouchables (1943, pp 25-26), Ambedkar wrote, “It is wrong to suppose that the majority in all circumstances can be trusted to represent the will of all sections of people in the constituency.” In a recent article (Why Prejudice against the Reservation Policy, Critical Quest, 2017, p 3), well-known economist Sukhadeo Thorat – whose research has shown that caste works as an obstacle to the equal participation of the marginalized sections – reiterated Ambedkar’s concern. He wrote that the purpose of the reservation policy was to provide protection against discrimination in the spheres of employment, education, and legislature to ensure a fair share in these spheres for the marginalized sections.

Since the marginalized sections are not proportionately represented in the JNU faculty, students from these sections are often discriminated against in the admission interviews. To deal with this discrimination, the Bahujan and Left students’ organizations had been demanding reduction of the weightage of interview from 30 to 10-15 per cent. Not long before M. Jagadesh Kumar took over as the vice-chancellor, the JNU administration had constituted several committees – such as the Rajiv Bhatt Committee Report, the Thorat Committee and the Nafey Committee – to look into this issue. All these committees recognized the reality of caste-based discrimination. They found that the reserved-quota students were given far less marks than the general-category candidates in the interview. This, when the candidates from reserved categories got relatively good marks in the written exams in which their identity is not revealed. In the light of these findings, they had broadly favoured the reduction of interview weightage. But instead of going by the recommendations of the committees, Vice-Chancellor Kumar made the admissions completely interview-based, opening up the possibility of further discrimination.

Worse yet, the new admission policy increased qualifying marks for the interview to 50 per cent. This also goes against the very notion of social justice. Pertinent questions have been raised about this move: If people in Indian society are unequal, how can they be all treated equally?

The experience of JNU before M. Jagadesh Kumar took over as its vice-chancellor shows that reservation deepens democracy by preventing discrimination and ensuring equal participation. When the OBC reservation was implemented in 2007, it facilitated the admission of a huge number of OBC candidates. Within a few years, the number of OBC students had crossed the thousand-mark. In the year 2013-14, out of 7,677 JNU students, there were 3,648 Dalitbahujan students (1058 SCs + 632 STs +1948 OBCs). Now their number has sharply fallen due to unconstitutional provisions of the new admission policy.

The change in composition of students contributed to the assertion of Dalitbahujan culture and politics. The idioms of the campus began to change. The composition of the students’ union leadership also began to change and more and more students from marginalised sections were elected to top leadership roles. The formation of Birsa Ambedkar Phule Students’ Association (BAPSA) in 2014 and its emergence as a powerful force on the campus should be seen in this context.

The Left organizations active on the campus realized that they could no longer ignore Dalitbahujan icons. They shed their ideological hesitation of wearing Ambedkar, Periyar, Birsa Munda and Phule badges on their sleeves. Unlike in the past, posters, pamphlets and badges carrying the slogans and images of Dalitbahujan heroes and heroines have outshone those hailing Marx, Lenin, Trotsky, Stalin and Mao. Yet another manifestation of the changing discourse of JNU politics was the installation of the portraits of Phule and Birsa Munda in the Students’ Union (JNUSU) office six years ago. Moreover, the campaign for right to eat beef and pork and the celebration of Mahishasur Day served a severe jolt to brahmanical consciousness.

Now, all these gains are being snatched away by anti-constitutional measures. The new admission policy of JNU is a grand design of brahmanical/Hindutva forces to arrest the strengthening of Dalitbahujan assertion on the campus. As one of the student protestors said, “Our resistance is our existence. The new admission policy, if not opposed collectively, will lead to an unaccounted number of Eklavyas losing their thumbs.”