On 28 September 2017, for the first time in the country, a police complaint was lodged against the organizers of Durga Puja in Chhattisgarh’s Kanker district for the depiction of the slaying of Mahishasur by Goddess Durga. Lokesh Sori had filed the complaint. Sori is a Dalit leader from Pankhajur in Kanker. He is associated with the Bharatiya Janata Party (BJP) and enjoys wide support in the area, because of which the pressure started mounting on the police to take action on his complaint. But before the end of the day, the news had reached the office of the Chhattisgarh Chief Minister and the RSS headquarters in Delhi, and despite the pressure from the public, the Kanker police did not convert Sori’s complaint into an FIR.

Instead, an FIR was registered against Sori. The complainant said that he had put up a message on a WhatsApp group insulting Hindu goddess Durga and thus hurting the sentiments of the Dwij Hindus. The police took prompt action on this FIR. Lokesh was arrested on 29 September 2017 and was sent to jail. He was granted bail after about one and a half months, only to discover that he no longer had ordinary sinusitis. He was diagnosed with cancer.

These days, he is battling maxillary cancer and has been admitted to Dr Bhimrao Ambedkar Smriti Hospital in Raipur. Even the educated Dwijvadis are spreading rumours that he had insulted Durga and is paying the price for his sin; that until he apologizes to Durga by rubbing his nose on the ground, his condition will not improve and he will die. 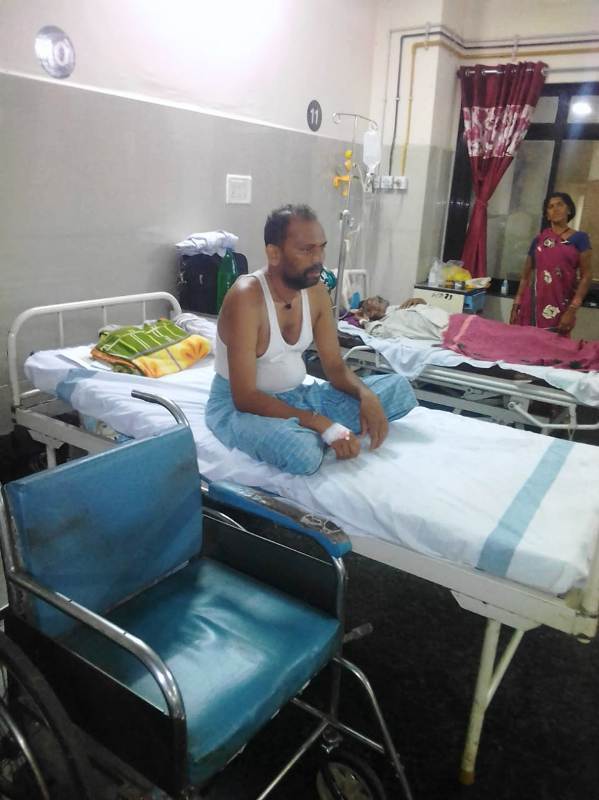 Lokesh dismisses all this talk as humbug, so do the doctors.

After his release from the jail in November 2017, his sinusitis worsened and tests showed preliminary symptoms of cancer. He underwent surgery at Raipur government hospital and was told that he would have to undergo chemotherapy. However, he did not get chemotherapy. Recently, he started having difficulty breathing, became hard of hearing and his nose and mouth started bleeding. His younger brother Khamesh Sori took him to Raipur hospital on 12 October 2018. After a preliminary check-up, the doctors said that besides cancer, he was also had heart ailments.

Lokesh Sori says: “The educated section of the brahmanical community, which patronizes the Manuvadi system, is saying that since I had made a comment about their goddess Durga and had a complaint registered against the organizers of Durga Puja for portraying the slaying of Mahishasur, I have been punished with this disease. This is also their [Manuvadis’] warning to the Backwards and the Dalits that they should abandon their beliefs, values, ideals and great personalities and close their eyes and ears, and do what the Manuvadis want them to. The Adivasis are also being told that no one had dared to complain against Durga Puja; Lokesh Sori did that and has had to face divine retribution. It is being said that Durga is angry with me. The are asking, ‘If Mahishasur and Ravan are revered by Adivasis and OBCs, why were they sleeping till now?’ But we could have protested only when we became conscious of our values. This misinformation campaign has led to a section of Adivasis believing that I have done something wrong. They are frightened. But a large section is with us and is supporting me as I battle this disease.”

Lokesh adds, “The patrons of Brahmanical system don’t want us to celebrate days associated with our idols. We have always respected our ancestors, Mahishasur. We have been worshipping them. When new stocks of food grains arrive in our homes, we build an idol of Mahishasur – who is also known as Bhainsasur in our area – and offer the grains to him. Only then do we cook the food grains. When we saw that the brahmanical elements were openly insulting him, we felt that this should be stopped. Like forests, land and water, it is our duty to preserve and protect our beliefs and values. Their insult should end.”

Lokesh Sori, who was a leader of the BJP Dalit cell and was also elected as a corporator, has now quit the BJP. “When I was with the BJP, I never knew that this party was so disrespectful of the Bahujans,” he says. “There is no place for our ideals, culture and traditions in that party. Last year, when I lodged a complaint against the insult of Mahishasur, I felt this acutely and also suffered due to it. When I reached the police station along with the others of my community to complain against those who were hurting our religions sentiments, I was abused. They took it as a joke. Later, an FIR was registered against me under Section 44 of the IPC and I was arrested. Section 295 was added to the charges. My complaint against the insult of Mahishasur was not even considered. No one in the government or the administration was ready to listen to me. They are ruling the state. If they don’t act, who will. The sub-inspector who took some interest in the case was transferred. That was done because he was an OBC. As for the Inspector, I have already described his attitude. Those who had insulted Mahishasur were booked under Section 155 and were asked to appear in the court and that was that.”

Among those who registered the FIR against Lokesh Sori for insulting Durga, many were from his former party, the BJP. They are now spreading canards about him.

Lokesh Sori’s mother and wife are also sore with the turn of events. They are steeped in superstitions and believe that the black magic of Brahminvadis, besides the torture he was subjected to in the jail, were responsible for his disease. Doctors told his brother Khamesh Sori that besides cancer, he also had an heart ailment and that stress might be its cause. 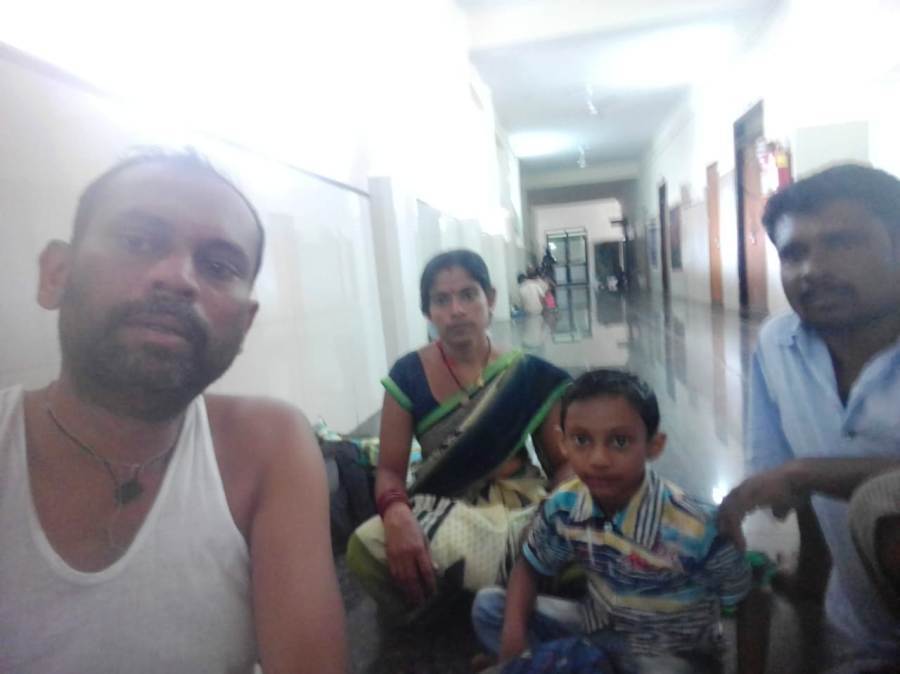 Lokesh Sori in hospital with his wife, son and brother Khamesh Sori

Lokesh, whose father is a peon in the education department, has been fighting for the rights of the Adivasis and the Backwards. “The kind of atmosphere the brahmanical elements have built against me have made me fear for my life,” he says. “After my arrest, I always felt that I may be murdered any time. In India, anything can be done in the name of religion. I am living under fear. Also, after being diagnosed with this serious disease, I have started fearing for my life. I have three children and my youngest son is in UKG.

Lokesh Sori’s younger brother, a farmer, says, “After he bled from his mouth and nose for three days, I got him admitted to the Raipur hospital and his treatment began. I live in the interior, where my brother enjoys great respect. They say that Lokesh Sori is introducing them to their values, beliefs, culture and great personalities. This is a trick being played by the Manuvadis. They want us to be frightened and start following them. They want us to be their partners in insulting our ideals.”

What do the doctors say?

Dr. Hiralal Alawa, who has worked in the All India Institute of Medical Sciences (AIIMS), Delhi, and is the national patron of Adivasi organization Jai Adivasi Yuva Shakti says, “Anyone can be afflicted with cancer. It is rubbish to say that one can get cancer because of abusing or insulting anyone. There are many scientific reasons for cancer developing in the body. Sometimes, even people who lead a very simple and spartan life, who do not have any kind of addiction, are afflicted with cancer. So, saying that Durga’s ire is the reason for cancer is absolute rubbish. It is just a rumour meant to frighten people.” 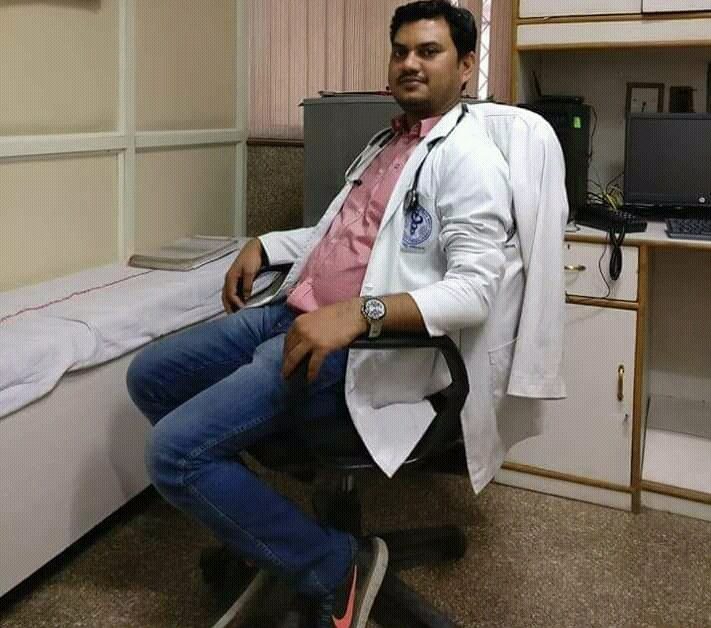 Dr Virendra Chaudhary, who works in the Government Hospital, Gorakhpur, says cancer is not incurable. About Lokesh Sori’s cancer, he says: “Understand it in this way. There is an empty space between the bones in the skull. It is called sinus. When additional cells start developing in sinus, there are problems. Lokesh is suffering from maxillary cancer. This causes blockage in the nose.”

He says: “The patient can be treated through surgery. The surgery is easier if the cancer is in the preliminary stage. Sometimes, only radiosurgery is enough. Even if this cancer is in an advanced stage, treatment is possible. I would advise Lokesh Sori to move to a well-known, bigger hospital and have himself treated by a specialist. He should not think that criticizing someone has caused this disease. Neither should his family think so.”

Why are the rumours being spread?

Pramod Ranjan, managing editor of FORWARD Press, says, “Behind these rumours is a well-oiled network, extending from the offices of political parties in the capitals to villages and temples. The idea is to build social and psychological pressure on the rebels against the system to force them to give up. Many times, doctors also join this conspiracy so that the psychological pressure can be increased.”

Ranjan adds, “If you just stand outside a temple, you will find many people suffering from serious diseases and their families. They are people who worship in temples day in and day out. Then, why do they get cancer? M. S. Golwalkar, the second sarsanghchalak of RSS, had also died of cancer. He was a devotee of Durga. Sangh’s devotion to Durga includes insult and humiliation of Adivasi, Bahujan heroes. Then, why can’t we say that he [Golwalkar] became a victim of Mahishasur’s ire and died a horrible death for hurting the sentiments of Bahujans? The fact is that those spreading these kinds of rumours are suffering from the cancer of the mind and they want the entire society to suffer from it so that their social domination based on idol worship and superstitions can be perpetuated.” 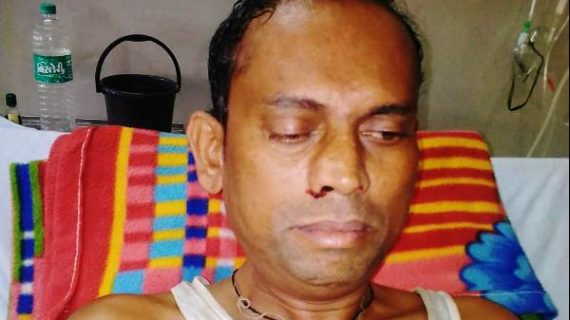 Despite the mounting expenses on treatment of his disease and his lack of resources, Lokesh Sori is now coming out from the depths of depression and is making plans for the future. If the cancer allows him to live for five more years, he says, he will shape at least 50 Lokesh Soris to take on the exploitative brahmanical system and its traditions. Forward Press reports