The day was 22 October 2021 and the place, Singhu, which is on the Delhi-Haryana border. The border here falls within the jurisdiction of two different police stations – Narela in Delhi and Kundli in Haryana. The Kundli Police Station is very close to one of the sites where farmers have been agitating against three farm laws for the past 11 months. Besides police personnel from the two states, central forces have also been deployed in strength in and around the protest venue. A local resident said that at one time around 5,000 policemen were deployed there. But even now their number is not less than 500.

The heavy police presence raises a key question. When Lakhbir Singh was being killed by the Nihangs (members of a Sikh sect) on the night of 15 October, why didn’t the police hear his shrieks, his pleas to spare his life? When the Nihangs were severing his hands and feet, he screamed in agony. Where was the police then?

A local showed us the barricade on which Lakhbir Singh was hung. He also showed us the wooden block on which Lakhbir’s hands and feet were placed before chopping them off; next to the spot is the camp of the Nihangs and a temporary stable for their horses. He said that Lakhbir Singh used to serve the Nihangs and looking after their horses was among his responsibilities. 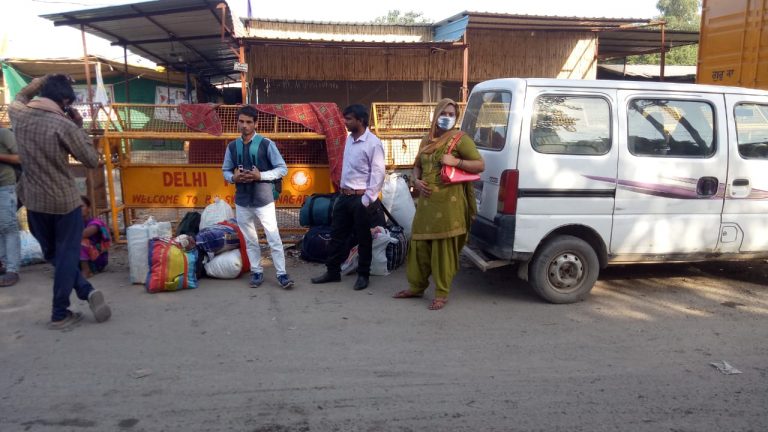 The spot near the main dais of the Samyukta Kisan Morcha, where Lakhbir Singh was murdered

On the day of Lakhbir Singh’s murder, the Samyukta Kisan Morcha issued a statement. The main dais of the organization is barely 50 metres away from the spot of the murder. The statement, issued on 15 October 2021, read:

“It has come to the notice of the Samyukta Kisan Morcha that today morning a resident of Punjab, Lakhbir Singh (son of Darshan Singh, Village: Cheema Kala, Police Station: Sarai Amanat Khan, District: Tarn Taran) was mutilated and murdered at Singhu. A Nihang group has taken responsibility for the murder saying that the man was killed for attempting to defile the ‘Sarbalok’ scripture. It is said that the deceased was living with that group for the past some time.

“While condemning this brutal murder, the Samyukta Kisan Morcha wishes to make it clear that none of the parties in this incident, the Nihang group/community or the deceased, were associated with the Samyukta Morcha. We are against the defiling of any religious scripture or icon but no individual or group should take the law in their hands. We demand that the twin issues of murder and the defiling of religious scripture be investigated and those responsible punished in accordance with the law. The Samyukta Kisan Morcha will cooperate with the police and the administration in any action they take in keeping with the law.

“This movement is being conducted using democratic and peaceful means and it opposes violence of any kind.” 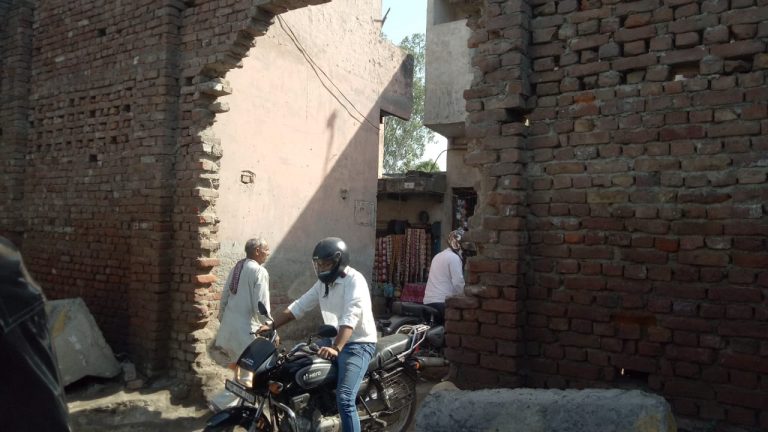 The slushy passage from Delhi to Haryana at Singhu

This statement clarifies that Lakhbir Singh was indeed murdered and that the Nihangs first severed his limbs and left him to die in the most barbaric manner. The statement is also confirmation that Lakhbir stayed with the Nihangs. However, only an eyewitness can describe what exactly happened that day.

A worker in a private establishment, barely 100 metres from the crime site, said that loud screams aroused him from sleep around 2.30 am. He stepped out and saw people rushing towards the main dais of the Samyukta Kisan Morcha and followed them. The policemen, who were deployed on the Haryana side of the border, were also gathered at the spot. The Nihangs numbered around 20-25 and all of them had swords in their hands. The man cried in agony for the last time around 4pm. He was killed in the presence of many people.

Ravi Kumar, who is in charge of the Kundli police station, said over the phone that they received information about the incident at around 5.30 am and within 15 minutes a police team reached the spot. 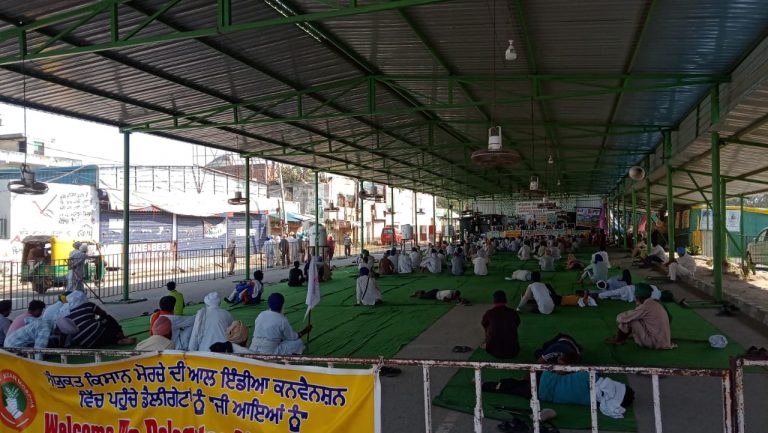 The main dais of the Samyukta Kisan Morcha at Singhu

Viki Jainpuri, the media in-charge of Kisan Mazdoor Sangharsh Samiti, divulged limited information about the incident. This group has its own dais on the Delhi side of the border. It is about 50 metres from the dais of the Samyukta Kisan Morcha on the Haryana side. As police have placed barricades across the road, the only way to get to the Kisan Mazdoor Sangarsh Samiti’s dais is to follow a trail along a drain. On the other side of the border, the approach trail to the Samyukta Kisan Morcha dias cuts through the village and is full of slush and muck.

According to Jainpuri, “The movement is not losing steam. Since paddy is being harvested, the numbers at the protest site are somewhat fewer. By 26 November, protestors will be back in full strength.” When asked about the Supreme Court’s recent observation, he said that it was the police that have blocked the roads. “Let the police open the roads and then we will decide what we have to do,” he said.

About Lakhbir Singh’s murder, he had nothing to add to the Samyukta Kisan Morcha’s statement issued on 15 October 2021.

It is clear that there were many eyewitnesses to Lakhbir Singh’s murder. This was confirmed by an elderly farmer from Haryana who has been staying at the protest site and participating in the protests. He said, “When Lakhbir Singh was being killed, someone spread the rumour that he was from Haryana, so a large number of protestors from Haryana rushed to the spot.” According to him, many people shot videos of the incident but no one tried to save the victim. “What happened was wrong,” he said. “Even if Lakhbir Singh had committed a mistake, he should have been let off after giving him a beating. Or else, he could have been handed over to the police. What was the need to take the law into your own hands?” 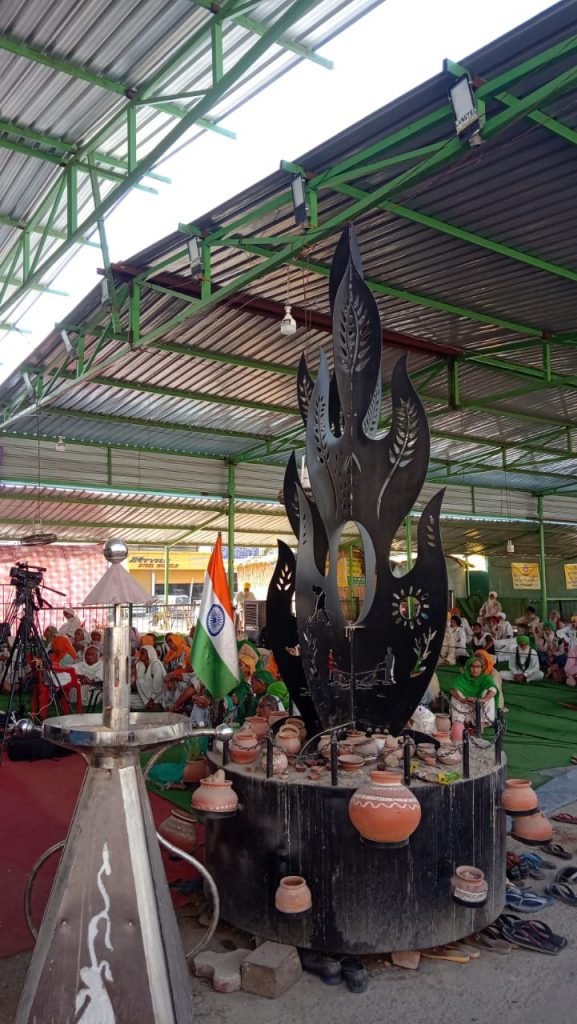 We also came to know that a similar incident had taken place on 21 October 2021. On that day, a Nihang demanded a chicken from a worker of a poultry farm. The worker declined. A few minutes later, when the worker was standing at a distance, smoking a bidi, he was attacked and ended up with a broken leg. There was no official confirmation of the incident though.

Be that as it may, there is a makeshift clinic in the protest venue just about 100 metres from the spot where Lakhbir was murdered. An ambulance is available there round the clock. The question that still remains unanswered is why no attempt was made to save Lakhbir Singh. Why did people just watch as he bled to a painful death? 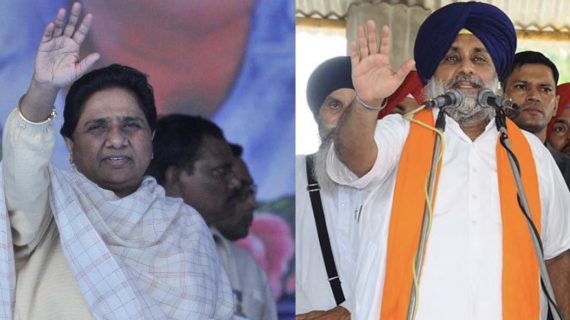 The SAD is reeling from the Jat-Sikh anger against the new farm laws and, despite a third of Punjab’s population being Dalit, it has been 25 years since the BSP turned out a creditable electoral performance in the state. Given this scenario, the new SAD-BSP alliance has its work cut out, writes Ronki Ram 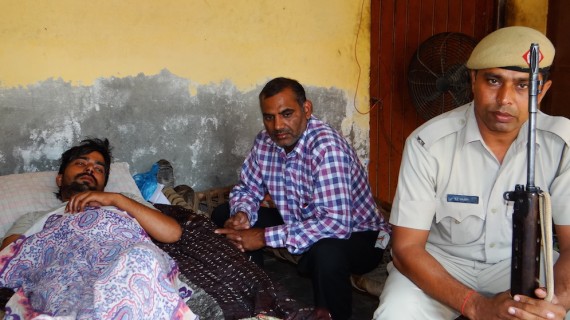 A preliminary police inquiry found that the room was set afire from the inside, not from the outside, and that kerosene, and not petrol, was used. The family of the accused said the fire resulted from a quarrel between the couple