On the issue of Brahmeshwar’s murder, people were more curious to know the reaction of the Dalits to it. Many people who called me up wanted to know just that. I told them that Mukhiya was a murderer of the Dalits and Dalits were not at all grieved by his murder. The man who had formed the Ranvir Sena for oppressing the Dalit labourers, who had attacked their habitations and shot them, who had hurled infants into the air and riddled their bodies with bullets, who had slit open the wombs of pregnant women and hacked the foetuses with swords – only predators can mourn the death of such a fiend. Why should the Dalits feel sad? They are happy. And why not? Their biggest enemy is no more. 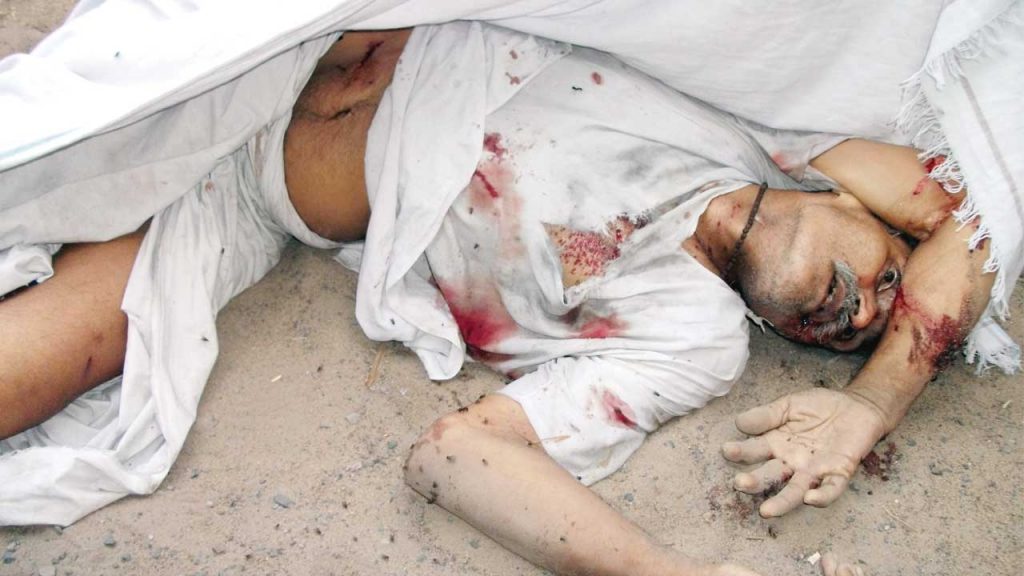 But the Bhumihars of Bihar are not happy. They are mourning the murder of their leader. That is why, they reacted by a wanton display of their muscle power – a never-before in Bihar’s history. This unity of Bhumihars has terrorized the Dalits. They see in it a possibility of the revival of the Ranvir Sena. And their apprehensions are not misplaced. The pictures of the mayhem unleashed by Mukhiya supporters, carried by newspapers, can well lead one to the conclusion that feudalism is still alive and kicking in Bihar. Immediately after Brahmeshwar’s murder, a violent mob of Bhumihars attacked a Dalit hostel, indicating that Dalits were their prime target. The ruckus in Ara on Friday, 1 June, can be dismissed as a spontaneous reaction but what happened on Saturday, 2 June, all over Bihar and especially in the capital Patna cannot be so described . The 3 June newspapers show that the goondaism had the tacit support of the government because had it wanted, it could have prevented a repeat of what happened at Ara at other places. But the government remained a mute spectator and the rioters were allowed to run amok. What does this mean?

The Ranvir Sena had carried out the Bathani Tola massacre on 11 July 1996. Mukhiya Brahmeshwar was the chief of the Ranvir Sena. The case dragged on in a lower court in Ara for 14 years, at the end of which, three of the accused were sentenced to death and the rest to life imprisonment. The convicts appealed before the Patna High Court. The High Court acquitted all the 23 accused for want of evidence. The High Court also questioned the eye-witness accounts. It set aside the testimony of the witnesses on the ground that they were related to the families of the victims. The High Court also had reservations about the FIR being filed 12 hours after the incident. The eye-witnesses were dead and hence in the absence of evidence and credible witnesses, the High Court declared the accused not guilty and acquitted them. Brahmeshwar, who was the accused in 22 criminal cases, was already out on bail.

Questioning the judgments of the court can be construed as contempt but who will answer the question: When all the accused were not guilty then who had committed the Bathani Tola massacre? Who were the persons who had mercilessly massacred 22 Dalits, including a 9-month-old child?

The Dalit labourers who were killed in Bathani Tola were supporters of Communist Party (Marxist-Leninist). This party was fighting for their rights. It was raising its voice against their exploitation by the landowners. Bathani Tola was an attempt to muzzle this voice. With the court having ruled in favour of the accused, a pertinent question now is the role of CPI (ML) in the entire episode. I do not have access to any official record that can answer the question. But a report of Gunjan Kumar, carried in the 13 June 2012 issue of Amar Ujala does make some things clear. The report underlines the fact that the Ranvir Sena’s sworn opponent CPI (ML) had no role in Mukhiya’s murder. The report says that the police investigations and information collected by intelligence agencies show that Naxal outfits, including CPI (ML), had worked out reconciliation when Mukhiya was in jail. The report also says that it was as a part of the compromise formula that the two sides did not testify against one-another in the court. Consequently, Brahmeshwar Mukhiya and many Naxalites were acquitted in most of the murder cases.

This is the class character of the Left parties, who shed tears in the name of the labourers! Since the leadership of these parties is in the hands of the upper castes, it is not unnatural that they protect the interests of their brethren. Dr Ambedkar had realized the true class character of the socialists in his lifetime. The Dalit intellectuals working with the Communists have the same experience. They are Brahmins, Thakurs first and Communists next. They are neither casteless nor classless. If the roots of Brahmanism, Feudalism and Casteism are still strong in India, one of the reasons is the Brahmin leadership of the Left. What sort of Left’s avowed politics in the interests of Dalit labourers is it that it could not even fight for their interests properly? Even today, Bhumihar landlords are in possession of 90 bighas of the Panchayat land of Bathani Tola.

Mukhiya reaped what he had sowed. It is said that a tyrant has to die the same way in which he killed others. Mukhiya never knew that a bullet was awaiting him and that his blood-soaked body would lie in the middle of the road. The Bhumihars mourning his death do not remember the wails of the helpless-poor-Dalit labourers who were mercilessly murdered in Bathani Tola. Those bloated with upper-caste arrogance, who indulged in arson and violence in different cities of Bihar did not even care to think that Mukhiya was a murderer – not only of Dalits but also of democracy. They did not have even iota of shame. It was the height of shamelessness when Giriraj Singh, a minister in the Bihar government, described Mukhiya as a Gandhian. The minister did not feel ashamed while making this statement. How can a murderer be a Gandhian? Did Gandhi forge an army to get the poor murdered? Did Gandhi take to violence with a gun in his hands? No one can answer these questions in the affirmative. Then, why didn’t the Bihar government take action against this insane minister? Why has no Gandhian raised a voice against him? Many other ruling party MLAs have also condemned Mukhiya’s murder. Is this not the ultimate injustice to the victims of Bathani Tola?

Published in the July 2012 issue of the Forward Press magazine