Atrocities on Dalits are routinely reported from all parts of the country. But for some time now, Haryana has emerged as a laboratory for the oppression of Dalits and especially rape of their womenfolk. The Dalits of the state are reeling under extreme poverty. They lack fiscal resources. Most of them earn a living by either doing odd jobs or working the fields of the land-owning classes.h

Haryana is also known as ‘Jatland’, primarily because ever since it came into being in 1961, the governments of the state have been led by the members of this particular dominant caste. The agricultural land and industries of the state are also controlled by this community. The Jats run their parallel government in the state through khap panchayats. The police, administration and bureaucracy are also dominated by them. Another peculiar characteristic of Haryana is that barring a fleeting influence of the Arya Samaj, it has never witnessed any movement against social evils. No progressive, democratic movement could get a foothold here. That is why, notwithstanding economic development, the state is still in the grip of medieval, inhuman, orthodox and reactionary values and belief systems. 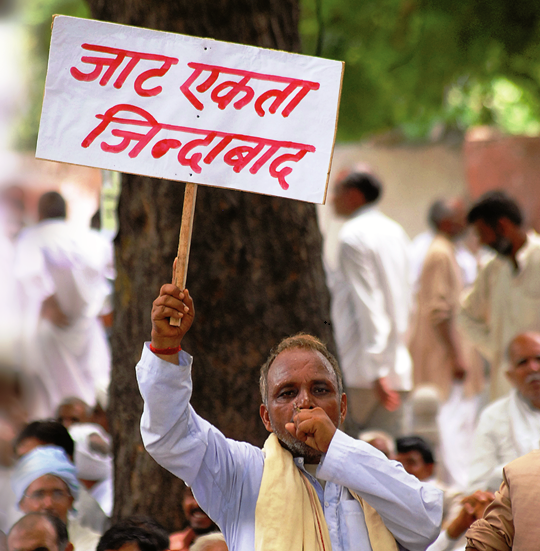 It is not that the dominant caste is numerically stronger in the state. Despite that, it has managed to wrest control of all the state’s resources. Any native of the state will tell you how the writ of this caste runs in the state and how Dalits are humiliated and oppressed at every stage. In the rural areas too, this caste comes first. The democratic rights ordained for the Dalit community in the Indian Constitution have no meaning here. In this year alone, from January to November, more than 100 cases of rapes were reported from this state and, in most of the cases, the victims were women of the Dalit community. The Bhupender Singh Hooda government came to power in the state in March 2008 and since then there has been a quantum jump in the incidents of rapes and atrocities against Dalits. In the infamous Gohana incident of 2007, the houses of the Dalits were set ablaze. Subsequently, a Dalit youth named Lara was shot.

In the same year, five members of the Dalit family were paraded naked in Narnol village and were ostracized from the village. On 21 April 2010, Dalit houses were consigned to flames in Mirchpur and a school-going girl and her father were burnt alive in their house. All the Dalit families of Mirchpur fled from their homes and are yet to return. In 2001, musclemen began a boycott of Dalits families in Bhagana village. And they are yet to get justice. Many Dalit families of Bhagana are sitting on a ‘dharna’ outside the office of Deputy Commissioner of Hisar. On 15 February 2012, the hands of Rajesh, a dalit youth, were hacked just because he dared to drink water from an earthen pitcher belonging to a member of the dominant caste. On 31 August 2012, a priest did not allow two Dalits to perform a puja. This happened in Chautala village.

In 2012 musclemen blackened the face of a youth and paraded him in the village. His crime: he had married a girl for love. A fine was slapped on his father. On 9 September 2012, a minor Dalit girl was gang-raped by youth of the dominant caste and her father committed suicide out of a feeling of shame and humiliation.
Oppression of Dalits has been going on in what is now Haryana for the last several centuries. But economic development and the Dalit movement have inspired many Dalits to acquire education. They now want to walk with their head held high. This is not acceptable to the Jat community. It wants to perpetuate its dominance. They are aghast that the people who were their slaves for centuries are trying to break free. This frustration is making them commit more and more atrocities on the Dalits. They are taking full advantage of the fact that most of the Dalits lack financial resources and are landless. On the other hand, the Jats own most of the lands. It is not that no atrocities were committed on Dalits under the Chautala dispensation. But with the Hooda government coming to power, the intensity and frequency of the atrocities have gone up. The break-up of rape cases registered in Haryana from January to November 2012 is as follows: Hisar (94), Karnal (92), Rewari (89), Rohtak (87), Gurgaon (34), Ambala (31) and Faridabad (28).

The caste which sets the houses of the Dalits ablaze, which rapes their women is the caste which runs the khap panchayats. These bodies represent medieval, feudal barbaric values. Recently, the khap panchayats ruled that girls should not carry mobile phones as they ‘corrupt’ the girls. In another decision, a khap panchayat forced a young girl and a boy, belonging to different castes who had married for love to become brother and sister by forcing the girl to tie a rakhi on the wrist of the boy. These panchayats are against inter-caste marriages. They are anti-women and anti-Dalit. It is the khap panchayats which encourage female foeticide in Haryana—something that has led to boys vastly outnumbering girls in the state. Khap panchayats had recently ruled that female foeticide be curbed. The media publicized it as an instance of the progressive worldview of the khap panchayats. However, the khap panchayats were forced to take this stand as the young men of Haryana were finding it increasingly difficult to find brides. They are also demanding that the minimum age of marriage of girls be reduced to 15 years. This is an attempt to divert attention from the growing incidents of rapes in the state. Needless to say, the minimum age of marriage has no connection whatsoever with rapes.

No section of Indian society is entirely free from casteist feelings. The police and administration of Haryana openly discriminate on the basis of caste. The police force is dominated by the Jats and it is next to impossible for Dalits to get justice. Even their FIRs are not registered. The Congress government, led by Hooda, is ruling Haryana for the last ten years. Its survival depends on the dominant caste. And that is the reason it drags its feet in taking any action against this caste. The Haryana government is patently casteist. The different Dalit parties and their leaders claim to be representatives of the Dalits. But the truth is that none of them are real protectors of the interests of the Dalits. In fact, the anti-Dalit polity seems to have absorbed these parties into its fold. Instead of launching an agitation against the anti-Dalit policies and crimes, these parties do not even issue a statement against them.