A train leaving Delhi for Patna. Coaches chock-a-block with passengers. Long queues before general compartments. Passengers falling over one another. None of this is surprising – or unusual. But then suddenly, in this din, one momentarily catches a glimpse of the faces of two young girls in the train. They are unusual. No, they are surprising and shocking. ­­­­­They are also a testimony to the evil rampant in our society. The faces of the two Dalit sisters from Bihar introduce you to reality – the cold, horrific reality – of our country. But then, who would like to look at their faces? I bet, you won’t.

Chanchal and Sonam are sisters. They are returning to Patna after getting themselves treated at a Delhi hospital.

Last year, in October, when they were sleeping on the terrace of their house, four young boys of the village poured acid on their faces. At that time, Chanchal was studying in Class XI while Sonam was in Class VII. Their father Shailesh Paswan chokes when he recounts how the musclemen of the village resented that his daughters go to school. They pestered them on the streets, pulled at their clothes and used abusive language. When all this did not deter the girls from going to school, they poured acid on them.

Shalu Awasthi, a young Lucknow-based journalist, is working for acid-attack victims. She says, “Acid attacks are not confined to the body. The acid burns one’s soul, it sears one’s heart. The victims lose their identity. The face, which is the identity of a person, is gone. It is not only an attack on the body. It is an attack on the dreams and the aspirations of the victims.” 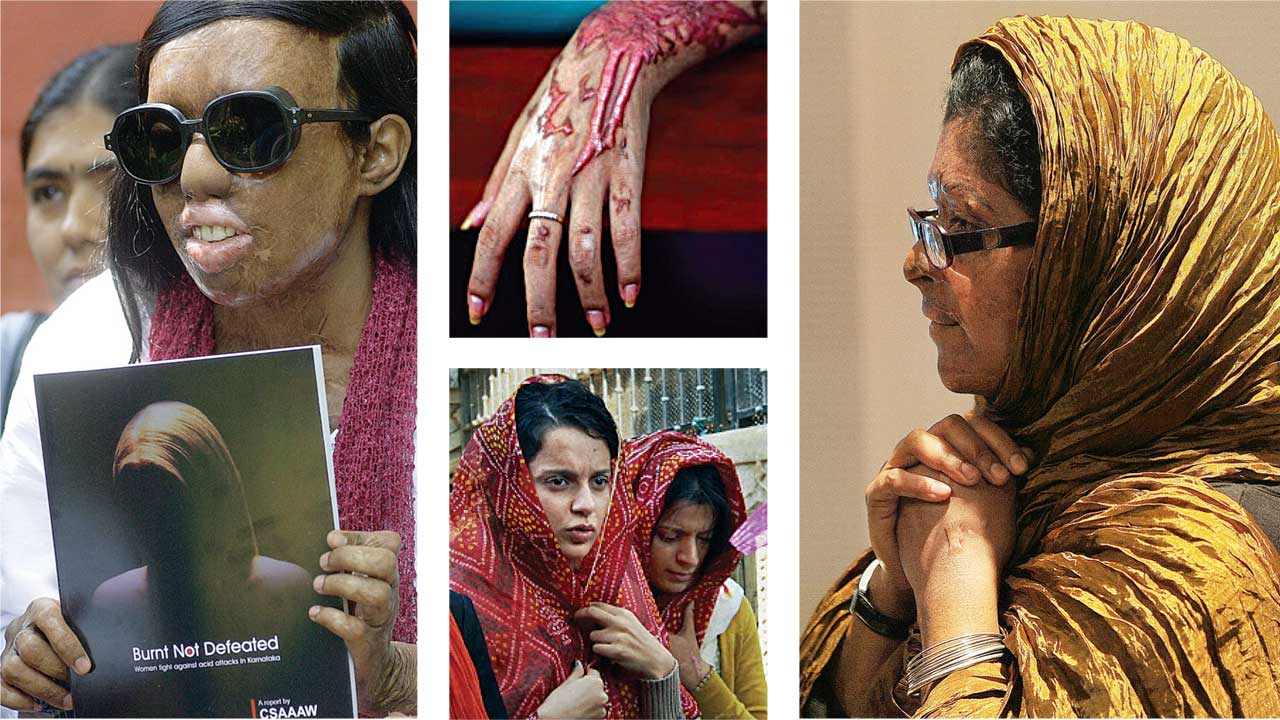 Alok, who laid the foundation of an organization Stop Acid Attacks, says that while barbaric incidents that take place in or around Delhi get nationwide publicity and sympathy, similar incidents in other parts of our huge country do not. According to Alok, on an average, 10 cases of acid attacks take place in the country every month. And these include husbands throwing acid on wives, brothers-in-law (jija) on sisters-in-law (saali) and boys on girls in one-sided affairs.

Shortcomings in the law

In 2001, acid was thrown on Arti in Kanpur. This was the first reported case of acid attack in India. In other words, very few such incidents had occurred prior to this one. Arti’s case was much talked about not only in Kanpur but also in the rest of India. But still, the hearing in the case could begin in a fast-track court only in 2009, after much effort. The court sentenced the accused Abhinav to 10 years of rigorous imprisonment and imposed a fine of Rs 5 lakh on him. His accomplices were awarded 8 years’ rigorous imprisonment and were fined Rs 2.5 lakh each. Everyone thought that even if belatedly, Arti had got justice. Arti’s family had fought a long legal battle and won it. But in December 2010, Abhinav got bail from the High Court by presenting forged documents.

After persistent pressure from all quarters, the bail was cancelled but by then, Arti and her family had become mentally depressed and quit Kanpur. Until recently, there was no separate section in the IPC dealing with acid attacks.

After the Delhi gang-rape incident ­­­­the Justice Verma committee was constituted and despite stiff opposition, the government promulgated a new anti-rape law. Under the new law, sections 326, 354, 270 and 376 of the IPC have been amended. A sub-section 326A has been added to section 326. This sub-section provides that if any person (whether a man or a woman) attacks another using acid, he or she may be sentenced to life imprisonment. In case of conviction under section 326, the maximum period of imprisonment is 10 years but life imprisonment has been prescribed for those convicted under the sub-section.

The new law is fine but some issues still remain unaddressed. For instance, there is no rule regarding the management of supply and sale of acid. So, the use of acid as a weapon of assault cannot be ruled out in the future. The moot question is whether providing treatment to the victim and punishing the accused is enough.­­­­­

According to Alok, while acid attacks on women are common in India, knowledge about how to provide first aid to the victims is completely lacking. This was the case with Chanchal and Sonam, too. Father Shailesh had reached the hospital with both the daughters in the midnight itself but nobody there knew what the primary treatment should be.