After a long parliamentary debate and much hullabaloo, it was announced that the Census 2011 would be conducted again on the basis of caste and class. But thanks to the unholy alliance between the politicians and the bureaucracy and their deviousness, the entire exercise has been rendered useless. 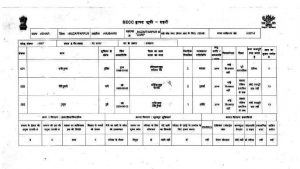 The report of caste census in Bihar, published recently, does not mention castes at all! The government faced protests from the people as well as the opposition leaders on the issue. Now, the enumerators (government employees) have been asked to make amends by going door to door once again. But can the corrections be completed so soon? What will be corrected is also not clear because there are only three categories in the report: SC, ST and Others. Obviously, ‘Others’ includes both upper castes and OBCs when the OBCs should have been listed as a separate category. The enumerators ticked one of the three options after asking the respondents. Some enumerators claim that the people refused to reveal their castes. Others contend that as there was no instruction to fill up the caste of the respondents, they wrote SC for Dalits, ST for tribals and ‘Others’ for upper castes and OBCs. Census officials, on the other hand, insist that the enumerators should have filled up the caste of the ‘Others’ as well; it was compulsory.

The government’s motives on this issue are suspect. The form for entering information is named ‘Social, economic and caste census’ but the column on caste has been designed in such a way that the people will mention their class and not caste. On top of that, upper castes and OBCs have been bunched together. This is nothing but a joke. Now, the enumerators have to fill up another form and they are either charging the respondents for it or are asking them to get it photocopied. What has happened in Bihar must have been replicated elsewhere in the country too, so, we can conclude that the so-called “caste census” has come a cropper.