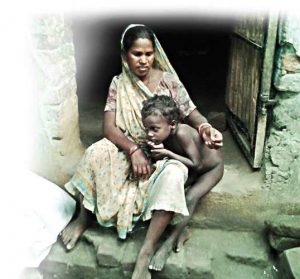 Purani Panapur is a village panchayat in the Danapur block of Patna district. There were about 160 houses of Mahadalits in this village, where they had been living for the last more than a hundred years. Spread over nine bighas of land,  their settlement  was lively and busy. Then, in July this year, the Ganges in spate  gobbled up the entire settlement. Even today, all that the residents have are plastic sheets for roofs above their heads.

The place where they have taken shelter now is beset with numerous problems. Besides anti-social elements, snakes and scorpions are regular visitors to the area. Then, there is the cold. Ranjeet Kumar says that they all are of the Chamar caste. Most of the population of around 800 make a living by doing manual labour. The houses that were washed away in the floods were built under the Indira Awas Yojana. All the residents have been given smart cards under Health Insurance Scheme. Some get free ration under Antyodaya programme. Around 25 families have been issued yellow cards. All others have red ones.

According to Ranjeet, 15 residents are matriculates and they include six women. The residents have formed an organisation called Akhil Bharatiya Ravidasiya Dharma Sangathan (ABRDS) and apprised the governor of their problems. They also met the chief minister at his ‘Janata Durbar’. The president of ABRDS, Janardan Ram, says that one person, Chulhan Ram, has already died of the cold. 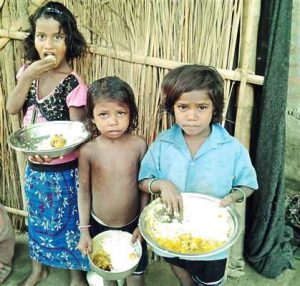 JK Das, secretary of the ABRDS, demands that the displaced people be resettled in some safe and secure place, and their houses be rebuilt under the Indira Awas Yojana so that they can resume their normal life.

The flood victims allege that the Mukhiya of Purani Panapur panchayat and her husband were rabidly anti-Mahadalit and did not cooperate in the rehabilitation work. The residents now have contacted the Chief Executive Officer, giving him details of a piece of vacant land on the southern side of the Ganges, where they want to be resettled. RJD MP Ramkripal Yadav has also urged the government to rehabilitate them.

In the meantime, the   Block Development Officer of Danapur block, Kundan Lal, tried to resettle them at Manas Dah in Diyara region but they turned down the offer. The residents say that Manas Dah remains under 10-12 feet of water during the rainy season. Manas Dah is at a lower level than the surrounding land and the water from 12 nearby villages ends up there. It is still filled with water even though the Ganges is no longer flooded. A huge quantity of sand will be required to keep the water out of the land. Offering this land to these people is a cruel joke.

The Bihar government had segregated Mahadalits from the Dalits so that urgent steps could be taken to improve their miserable socio-economic condition. But even after all these years, little has changed on the ground. Nitish Kumar seems to be making only hollow promises.