A typical example of media bias in dealing with reservation issues is the senior journalist Barkha Dutt’s programme telecast from New York at 9pm (IST) on 23 September 2015 on the NDTV 24X7 channel. The context was the agitation of some members of Patel community led by Hardik Patel in Gujarat. The programme consisted of two parts: 1) A discussion with a number of Patels at an apparently Patel-owned restaurant in New Jersey. 2) An interview of and discussion with the renowned economist Prof Jagdish Bhagwati of Columbia University recorded on the university campus and telecast in between the aforementioned discussion at the restaurant.

She didn’t have to spend the money on going to New Jersey and calling a number of Patels together. I could have told her, or anybody else wanting to know, straightaway that if these two related questions were put to a group of Patels (or to a group belonging to any Socially Advanced Caste – SAC), all of them would say they wanted caste-based reservation to be abolished and that the only kind of reservation acceptable to them was the one with income-based cut-offs.

Media objectivity, I should suppose, would have required Dutt to gather members of the Scheduled Castes (SCs), Scheduled Tribes (STs) and Socially and Educationally Backward Classes (BCs) and to put the same questions to them. If she had done so, she would have got exactly the opposite result. Media objectivity, I suppose, would have also required her to mention the proportions in Indian population of the two communities holding the opposite views. 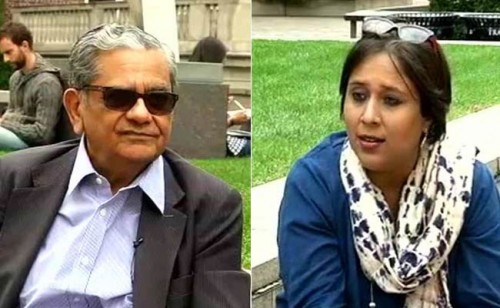 One of the participants said there was a time when reservation was necessary – the condition of the Backward Castes was bad – and Patels had accepted it then. However, he added, their condition has now changed and there is no need for reservation for those castes. That well-meaning gentleman seems to have been cut off from the reality in Gujarat. There was no reservation for the backward classes in the state until it got its first chief minister belonging to the backward classes, Madhav Singh Solanki, in 1980. His predecessors had been Brahmins, Banias, and Patels. To begin with, Solanki introduced 10 per cent reservation for Backward Castes in 1980. That was enough to irk the upper castes, who, mainly the Patels, pounced on the SCs who had nothing to do with the reservation. Apparently, it was not just the anger at the government’s latest move on reservation, but the surfacing of a deep-seated inherited hostility towards the SCs. Traditionally, the SCs had been farm servants and labourers at the upper castes’ beck and call but courtesy of the reservation introduced in 1943 at the initiative of Dr Ambedkar, some SCs had begun to get educated, move on and occupy positions of dignity. This was too much for the upper castes to stomach. Solanki, though, didn’t stop there. As recommended by the Rane Commission, in 1985, he announced an increase in the reservation for the backward classes to 28 per cent, which was closer to the population of BCs. This led to widespread agitation, predictably, by the Patels and other upper-caste students, forcing Solanki to renege on his plan. (The backward classes quota would be increased to 27 per cent in 1994 in line with the Mandal Commission’s recommendations and the Government of India’s order of 1990.)

The well-meaning gentleman who said things have changed does not seem to be aware of the continuing practice of “untouchability” and caste-based discriminations against SCs, including social and economic boycott, in Gujarat and most of the other states of India. He also does not seem to be aware that in all parameters of human development the SCs and STs are at the bottom, the Socially Advanced Castes (SACs) such as Patels, Brahmins, Banias at the top, and the BCs in between, usually closer to the SCs and STs than to the SACs.

On the other hand, Barkha Dutt, who comes across in TV programmes as well informed, did not take the trouble of informing the participants of these facts available in the public domain.

Trailers of the interview were telecast from the previous day to whet the appetite of viewers. This included an assertion of Prof Bhagwati that the reservation policy of India is a “disaster”. Prof Bhagwati seemed to justify the agitation of young Hardik Patel (whom he referred to as “Heart-ache Patel” – Prime Minister Narendra Modi’s Heart-ache) on the basis of a rhetorical question: “If 90 per cent of seats are reserved and a middle-class family has to do with only 10 per cent unreserved seats for its youth, what can such a family do?’ The learned professor, a Gujarati himself, does not seem to be aware that in Gujarat only 49 per cent of posts in the state government service and an equal percentage of seats in public educational institutions are reserved. He does not seem to be aware that the Constitution of India, as interpreted by the Supreme Court, does not permit reservation for social classes (SCs, STs and BCs) to exceed 50 per cent. Most states observe this limit. Even those states that have overshot the limit don’t have 90 per cent reservation. In Tamil Nadu, it is 69 per cent and the Supreme Court has yet to take a decision; meanwhile, it has been passing remedial interim orders in educational admission-related cases from year to year to offset the excess of 19 per cent.

Reservation in education, especially professional education, is the main bone of contention. There are reserved seats only in government colleges, government-aided colleges (whose 25 per cent seats fall under management quota and hence are out of the purview of reservations) and autonomous colleges. These amount to 5,650 seats (49 per cent for SCs, STs and OBCs) out of the 11531 available. Hence, 5,881 seats are unreserved. Reservation does not apply to 63,438 seats available in private and “self-financing” colleges, public-private partnership colleges and under management quota in government-aided colleges. Therefore, the total number of unreserved seats rises is 69,319. In other words, only 7.5 per cent seats are reserved and 92.5 per cent unreserved. So, Prof Bhagwati effectively reversed the percentages with his “90 per cent” remark . Rather than being a “disaster”, the reservation policy has in fact prevented disaster by giving India’s deprived majority a glimmer of hope.

Prof Bhagwati referred to the reservation policy as a Mandal-based policy. Perhaps, he is not aware that reservation in India started in 1902 and that it had come into effect in the whole of peninsular India well before Independence. The policy’s main protagonists were enlightened maharajas. Even at the central level, reservation for SCs began in 1943 (four years before Independence), ironically, through the efforts of Dr B.R. Ambedkar, an illustrious alumnus of Columbia University where Prof Bhagwati has been a professor and where this interview took place.

During the interview, Prof Bhagwati called Muslims the erstwhile ruling class who felt that they had been deprived of something they earlier had. Most of the Muslims of India, including Gujarat, are converts from the same castes that we now call SCs and BCs. They had nothing to do with the king or administration. Rulers of many parts of India were Hindus. Even during the British colonial period, one third of India was under Indian rulers, most of whom were Hindus. This did not make Dalits and the other backward castes a ruling class. Instead they were declared untouchables and discriminated against. The same is true of Muslims, most of whom have Dalit and BC origins. This is what underlies the present social and educational backwardness of the bulk of the Indian Muslim population.

Prof Bhagwati suggested vastly increasing the number of unreserved seats to end the admission woes. It will be unconstitutional to increase the number of seats and not increase the reserved seats proportionally. In fact, by not providing reservation for SCs, STs and OBCs, even private institutions of higher learning are violating a Constitutional amendment that was passed with virtual unanimity (with only one member abstaining and none voting against) in 2005, which empowers the state (ie central and state Governments) to reserve, by law, seats in educational institutions, including private institutions, for SCs, STs and BCs. Governments at the Centre and most of the state governments rendered this Constitutional amendment useless by not getting the required legislations passed.

At the same time, it is also true that lower-middle-class and even middle-class families of SACs find it impossible or extremely difficult to afford the fees in private colleges. The Supreme Court has observed that many of the private colleges are run with a commercial motive and has deplored this tendency. Instead of mollycoddling them, the government should lay down a fee structure, taking into account genuine expenses and allowing for a reasonable surplus for expansion. The resulting fees will certainly be higher than the fees in government colleges. For those who cannot afford them, the government could liberally provide scholarships and/or educational loans by stipulating income and wealth cut-offs. This does not require any tampering with reservation, which has been instituted for valid reasons in the Indian context.

This shortage of seats in public education institutions mirrors the shortage of jobs in the public sector. The total number of posts in the public sector in Gujarat, namely, the state government and quasi-government services and local bodies is 7,11,000. Assuming an approximately 30-year cycle and, therefore, assuming approximately 3 per cent of posts falling vacant annually, the total number of posts that is filled each year would be 21,330, of which reserved seats (49 per cent) would be 10,452 (if properly filled up). Compare this with the total number of educated job-seekers registered in employment exchanges in Gujarat: 9,05,500. The reserved seats thus would absorb only 1.15 per cent of the total educated unemployed. Thus reservation cannot be blamed for the unemployment among the SACs.

Journalists like Barkha Dutt and eminent scholars like Jagdish Bhagwati take a predictable position on reservation informed by their birth. They must familiarize themselves with the facts. The purpose for which reservation was conceived will remain unfulfilled until the SCs, STs and BCs and every caste and tribe among them are capable of securing through open competition their due share of jobs in and outside government and their due share of seats in education at all levels.

P.S. Krishnan, IAS (Retd), was secretary, Ministry of Welfare, Government of India, and is currently advisor to the Government of Telangana on backward castes welfare. In his illustrious career he has served on various government committees and bodies concerned with social justice for the backward castes