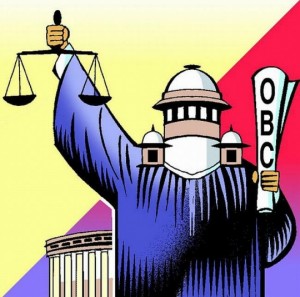 New Delhi: More than two decades after the implementation of Mandal commission’s recommendation of 27 per cent reservation for OBCs in central government jobs, less than 12 percent of the employees of central government ministries, departments and statutory bodies are from other backward classes (OBCs).

This state of affairs was revealed when the Times of India published a report based on the government’s reply to an RTI application. As on 1 January 2015, out of 79,483 positions in the A, B, C and D categories, only 9,040 were occupied by OBCs.

Surprisingly, the Department of Personnel and Training, which received the RTI application and is responsible for the appointments, itself fares poorly in this regard, with 12.91 per cent Scheduled Caste (SC), 4 per cent Scheduled Tribe (ST) and 6.67 per cent OBC employees out of the total 6,879.

Out of 41 Grade A posts in the Department of Scientific and Industrial Research, only one has an OBC officer.

Muralidharan, who filed this RTI application, has repeatedly filed RTIs every year to see if the central government has been fulfilling its role in recruitments under reserved categories. “The departments are supposed to release the data, but they have been found wanting,” he said. What is noteworthy is that 40 ministries and 48 departments, including the Ministry of Social Justice, didn’t provide the information that this Chennai-based scientist had sought under RTI.