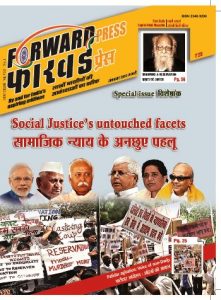 I was associated with FORWARD Press from the outset and was in the know of the various developments related with it. At the request of Pramod Ranjan, I also wrote for the magazine. I did whatever I could. A magazine taking the form of a social movement in such a short period and becoming the harbinger of a new movement was surprising – not only for me but for everyone.

I wished that this magazine had been a fortnightly or a weekly instead of a monthly. But the management had its own ideas. It wasn’t to be. I still believe that it should continue to come out in print. But the management, in its wisdom, decided to make it an online publication. This decision saddened me and I expressed my sadness.

This magazine did everything openly, unapologetically and with a clear concept behind it. The clarity and candidness of the magazine impressed the readers. Like other magazines, it did not beat around the bush. It stuck to its guns. It was a big effort with a small team, and that too at the national level. I don’t remember this magazine having ever conducted a sting operation or exposed a mega scam – something that is considered great journalism by journalists, and the editors and owners of big media houses. But not one of these media houses showed the courage that this magazine did. In fact, the magazine’s exploits were a slap in the face for the big media houses and many a stalwart journalists, who are promoting all sorts of misdeeds. The magazine proved that presenting truth as truth is what journalism is about. FP presented news that was not routine and from the routine news, it highlighted aspects that were ignored by big newspapers.

The journey of FP should continue – if not in print then on the web. I feel that the magazine will go from strength to strength; it will have a sharper edge and will push those forces to the margins that are out to marginalize the Bahujans.