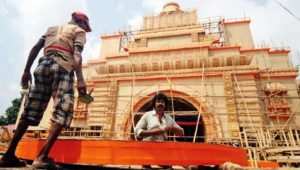 While most people would be thinking of festivals as a means of celebrating, eating well, worshipping and wishing each other, these festivals generate work and that in turn generates income, leading to participation, financial wellbeing and harmony within communities.

If one were to examine the icon of Durga, they would have to look at it from the very basic structure that is built with bamboo, pieces of wood and hay. Shudras, who are grass cutters and cane workers, and Muslims, who are carpenters, procure and provided all of this. These Muslims are Shudra and Dalit converts and hence Pasmandas.

Then comes the role of the potters or kumhars, again Shudras, who provide the clay. Plaster of Paris had become a much-used material to coat and mould the basic structure but recently clay has been back in use to make the immersion environment friendly. A large number of kumhars have converted to Islam.

Upper-caste Hindus do the painting and colouring but then comes the work of dressing the idols. In Bengal, most of the taantis or hand weavers are Muslims. Weaving has been one of the lucrative Muslim-run businesses. Again, weavers are Shudras and those who have converted to Islam are now Pasmandas. It is they who decide what colour the Devi should wear and more importantly what Mahishasur should wear to make the entire structure eye-catching.

Every day, the resounding playing of the “dhaak” announces that the idol is ready for worship. Most of the dhaakis in Bengal are either Muslims or Shudras. So, around each and every stage of preparation for the festival an industry has developed, supporting a huge network of labour that includes both Hindus and Muslims.

In the last few years, Pasmanda Muslims have come under a two-pronged attack. It must be understood that while they had changed their religion, they had neither given up their profession, nor the connection with their culture. Wahhabi Islam, with financial support from Saudi Arabia, is making inroads into the Pasmanda Muslims; they are being told that the culture with which they have identified is not theirs. The choice put before them is that they either give up their religion or their culture.

This is a difficult choice. Often the local madrasa is the only place where a Pasmanda Muslim boy or girl can get education without discrimination. They naturally do not wish to give this up.

The Sangh Parivar is spreading its own poison about segregating the Muslims from the “sarvajanik” festivities. Their agenda is to create divisions in the Indian social fabric and to spread hatred. Fascism always expresses itself in the garb of culture and Sangh Parivar is trying to entangle the Hindus into giving up multiculturalism.

From Durga Puja to Onam 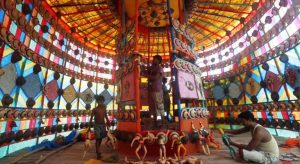 Onam, too, is a similar festival where Hindus, Muslims and Christians have been participating together. It is a harvest-based festival and the legend around it is of Mahabali, an Asura king. Wise, capable and extremely generous, Mahabali did not discriminate on the basis of caste or class. Only an Asura could have been so just. The gods became jealous of his popularity and began to think of a way to get rid of him. Vishnu, ever ready to preserve the supremacy of the gods, appeared as the Vamana, demanded land for three steps, got them and measured the entire universe in two steps and put the third on Mahabali’s head pushing him into the netherworld.

But the power of justice is such that he is still remembered and celebrated. The people of his beloved Kerala celebrate Onam to show King Mahabali’s spirit that they are happy. Mahabali’s subjects today are Muslims and Christians as well. Yet they celebrate this festival in unity.

Near Kochi is Trikkakara, where the only idol of Vamana is found. Obviously, the ordinary people have over the centuries not celebrated the victory of Vamana, for otherwise there would have been many such idols and temples. Yet, BJP President Amit Shah tweets “wishing all countrymen on Vamana Jayanti, the 5th avatar of Vishnu”. It is clear that this is a ploy not only to create divisions between the three communities but also to push forward the Brahmanvadi Hindutva agenda in Kerala where the festival of Onam is till now a casteless festival inclined towards celebrating the Bahujan presence.

A long-term strategy that has far-reaching results has to be devised to counter Hindutva’s usurpation of a culture that has grown and developed over years. The Durga Puja, for example, is called “Sarvajanik Puja”, yet there is never a Bahujan priest who performs the morning and evening puja, and it’s always the Brahmin women who prepare and serve the bhog. As the alternative, Mahishasur Diwas should have OBCs, Dalits, Muslims and Adivasi people or, in short, the Bahujans leading it.

Pasmanda Muslims are becoming marginalized within the marginalized. They are being pushed out of the mainstream both by the Hindutva agenda and the Wahhabi Islamization. Pasmanda Muslims have the desire to be part of such celebrations and should be encouraged to take part. It is the village community, the kasba, and the town community that needs to be addressed and not the smaller religious identities that are largely personal.

Similarly, the Vishvakarma Puja is a celebration of skill of the hands with the use of tools and machines. What does a Brahmin have anything to do with artisans’ skills? Yet, it is a Brahmin who performs even the roadside Vishvakarma Puja and walks away with a hefty “dakshina” without having made any contribution towards the actual work that has gone into putting together the festivity. This hegemony of the upper caste has to be challenged so that the masses can recognize their own power and strength. 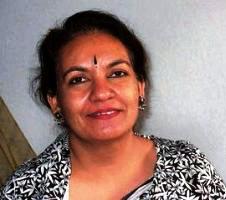 Noor Zaheer is a novelist and social critic. She writes both in English and Urdu. She is the author of the novel ‘My God is a Woman’, which is based on the Shah Bano case, and ‘Denied by Allah’, a work of non-fiction. Among her books in Urdu include ‘Mere Hisse Ki Roshnai’, (a memoir in which she writes about her parents, the legendary Urdu writer couple Sajjad and Razia Zaheer); ‘Bad Uraiyya’ (The Other Side of Tree), a novel; and “Surkh Karwan Ke Humsafar”, a travelogue on Pakistan.