The progressive thinkers, personalities from the cultural sphere, and social activists gave a new dimension to the history of Mysuru by taking part in a Mahisha Dasara celebration on 29 September 2016. Dalit Welfare Trust teamed up with the Backward Classes’ Association and Mysore University Dalit Students’ Federation 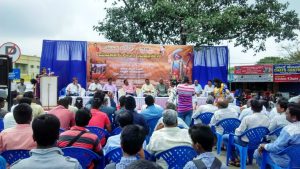 to organize the event. Thousands of researchers, students, workers and members of indigenous communities assembled before the statue of Mahisha to hear speakers talk about Mahisha’s contributions, the great Buddhist king who stood for the inclusive development of people regardless of religion, caste, colour and creed.

“Mahisha was a great Buddhist monk, a secular ruler and the destiny-maker of the marginalized indigenous people of Mysuru region,” observed Prof K.S. Bhagavan, a well-known Kannada thinker and writer. “Mahisha was the guardian angel of the state but the brahmanical forces have termed Mahisha a demon, hoping to bury the real history and betray the Buddhists and Dravidians who built Mahisha Mandala. The progressive thinkers should rewrite the history of indigenous people and re-establish their social and political supremacy in modern India.”

Prof Aravinda Malagatti, an author, said: “Actually, Chamundeswari did not kill Mahisha but vested interests created a myth to twist history. Mahisha is not a demon. He belonged to the Naga community, who are Buddhists in India. The Nagas had built the Indian civilization left behind and a rich legacy well before the vedic and brahmanical forces. The people of India should remember the historical legacy of Mahisha, who was a great humanist.”

Former chairman of Karnataka State Backward Classes Commission and eminent jurist Dr C.S. Dwarakanath released a book entitled Ancient Asura Rashtra by Siddaswamy. “In the history of India written by Aryans, Asuras are portrayed as demons even though they were the great protectors of Indian culture and civilization,” Dr Dwarakanath said. “Asuras are the indigenous people of India who sacrificed their lives for the liberation of the country and produced national wealth by their sheer patriotism and hard work.”

Prof B.P. Mahesh Chandra Guru, a rationalist and media scholar, spoke about the legacy of Mahisha: “Babasaheb Ambedkar had rightly observed that the history of India is a history of mortal conflict between Brahmanism and Buddhism. The Aryans came from abroad and invaded the Dravidians of India by using their manipulative tactics. The Aryans who talk about merit are the most responsible for the backwardness of India. The champions of merit are fake Indians but the Dravidians are the real meritorious people who built a rich legacy for India under the great vision and leadership of Buddha and Ambedkar. The history of India should be rewritten and the power equations between Aryans and Dravidians should be changed to make India a true progressive and welfare state.” 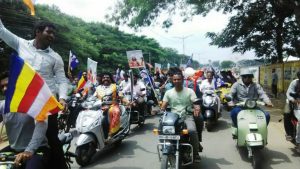 Media researcher Dileep Narasaiah M. delivered the inaugural speech. He emphasized the need to empower the marginalized sections based on the principles of Buddha, Ambedkar and other champions of social justice. He said that Dalits, Backwards and minorities would make Mahisha Dasara an annual event.

The convention passed the resolution to build a Mahisha memorial and to organize Mahisha Dasara on a grand scale, on a par with the Mysuru Dasara. The participants also decided to organize a national seminar to discuss and document the historical contributions of Mahisha. 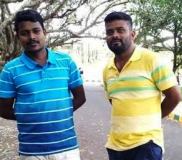 Guru Murthy is the convenor of the Mysore University Dalit Students’ Federation. Mahesh Sosle is the honorary convenor.