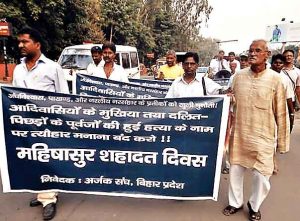 “Roti, Kapda Aur Makan” (Food, clothes and shelter) was a very popular slogan at one time. It is still used as the ideal representation of the needs of the socially and economically backward communities of India. But “samman” (respect) finds no mention in this slogan. Those who got “Roti, Kapda Aur Makan” did not get “samman”. They became top politicians, but the statues they unveiled were washed. They became top officers but “gangajal” was sprinkled on their chairs the moment they left. They were appointed to top positions but the names of the communities they came from continued to be used to abuse and mock people. Can only food, clothes and shelter fetch one social respect?  No, not at all.

To get social respect, the exploited sections first have to secure cultural respect. Their low status has its roots in the Brahmanvadi culture. Without pulling out these roots, it will be next to impossible for them to get social respect and dignity.

The organizers of Mahishasur Day say that their battle is for respect and dignity. Let us go through banners put up at events held in different places to commemorate Mahishasur and try to grasp Indian culture’s changing terminology and its meanings – both expressed and implied.