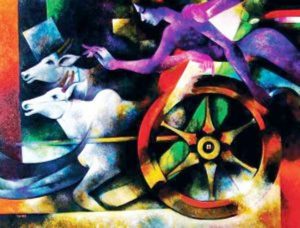 Shrimadbhagvad Gita or simply ‘Gita’ is a part of the Bhishma Parva of Mahabharata. It has 18 chapters and over 700 Slokas. The battle of Mahabharata, waged in Kurukshetra, forms the backdrop of the Gita. The battle was fought between the Kaurvas and the Pandavas for the kingdom of Kuru. As the two armies come face to face, the valiant Pandava Arjun expresses his reluctance to join the battle saying that it would result in deaths of his dear ones. Then Krishna gives a sermon to him on performing one’s duty. This sermon forms the Gita. Logically, this sermon should have been delivered on the first day of the Mahabharata, whereas Bhishma Parva opens on the tenth day of the battle. That is probably why the historian D. D. Kaushambi has written that the Gita was an addendum to the Mahabharata.

Oldest reference to the Gita
In ancient Indian literature, the Gita hardly finds any mention till the era of Adi Shankaracharya. Besides Banbhatta’s Kadambari, no other ancient text refers to the Gita, though it has been mentioned in the writings of Kalidas but in a different context and with a different meaning. Kalidas’s Gita has nothing to do with Krishna’s Gita. Chinese itinerant traveller Hsuan Tsang, who came to India in the 7th century, was the first person to refer to the Gita. He wrote that it was a “fake treatise” written by a Brahmin. Had the Gita been an ancient work, commentaries on it would have been written before the 9th century. It is indeed surprising that the first commentary on the Gita was written in the 9th century by Adi Shankaracharya.

Author under a cloud
The fact is that the real author of the Gita is some missionary of Brahmanism. He must have been a believer in Manusmriti and like Manu, he also wanted to perpetuate the Varna system. Had Krishna been the writer of the Gita, why would he have described himself as a Shudra? He was the creator of the Varna system. Why would the creator of a system place himself on the lowest rung, especially when it is said that Krishna was the hero of the Yaduvanshis? 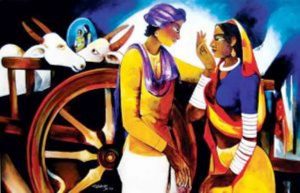 The Gita’s writer has chosen to keep himself anonymous. He is not interested in fame. He is interested in spreading his religion. The fanatical urge to spread one’s faith is so strong that many an author, in order to lend antiquity and authority to their work, has ascribed it to some famous author of yore.

You must have heard the name of Anand Ramayana. The Brahmanical missionary writer of this work chose to keep himself anonymous and ascribe it to Maharshi Valmiki. The author of the Gita seems to have used the same ploy. He attributed it to Ved Vyas. The anonymous writer of this book used Krishna to promote the brahmanical Hindu religion. The poets of Ritikaal also used Krishna to give expression to their vulgarity. Krishna is thus only a tool, a medium, an excuse, for this writer.

The Gita’s stylistic framework
We tend to accept the manner of presentation of an epic or a work of fiction as the truth. The manner of presentation, is, in fact, just a craft of the writer, a style, the texture of its content, the technique. It is not the truth – it is only a phantom of truth. The writer of the Gita has used his formidable craft to put his Brahmanical thoughts into Krishna’s mouth and then, very shrewdly, woven it into the Mahabharata and declared Ved Vyas as its author. 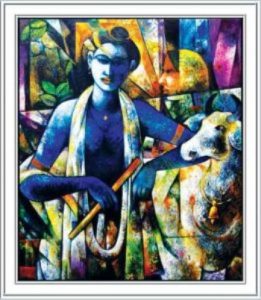 Ved Vyas is also the editor of the Vedas. The poet’s craft has been used liberally in the Vedas. The writers of the Vedas have given credit to God just as the Gita’s author has given credit to Krishna. But this does not mean that God is the writer of the Vedas. This is just a technique of the authors. The craft of Buddhist Jatak Kathas is different. Jatak Kathas rely on the stories of previous births of Buddha to make their point. On the other hand, the Gita’s creator projects brahmanical sermons through Krishna. Tulsidas has also used four narrators to present the story of Rama whereas Shivji is the original narrator of Ramkatha. What I mean to say is that the writers of Vedas have projected their views by putting them into the mouth of the Almighty. And Ved Vyas and Tulsidas have done the same with respect to Krishna and Shiva. This is merely the presentation, the poet’s craft and not the truth.

Take the case of novel Shekhar: Ek Jeevni (Shekhar: A biography) of Agneya. Shekhar is hanged for raising the banner of revolt against the British government. But there is no record of any such person being hanged in any jail in India. Shekhar was the child of Agneya’s imagination. It was only to give the novel a ring of truth that Agneya named it Shekhar: Ek Jeevni. By calling any novel a biography, you lend authenticity and credibility to it. Similarly, the writer of the Gita has created an illusion of the work’s authenticity by making Krishna mouth his brahmanical thoughts.

Language of Krishna
It is said that it is the the voice of God speaking through the Vedas and that the Gita is the voice of Krishna. Does God speak Vedic Sanskrit? Krishna is an ancient god. Why would he speak in classical Sanskrit? If he had to speak in Sanskrit, he would have used Vedic Sanskrit. It is not necessary that the language of the poet and that of his character are the same. Surdas’ Krishna spoke Brij Bhasha. That does not mean Krishna spoke Brij Bhasha. The language of the Gita is classical Sanskrit, which is the language of the poets of the Guptan era. That is why D.D. Kaushambi has concluded that the Gita’s Sanskrit is the Sanskrit of the third century. The Gita’s Sanskrit is extremely articulate, refined and powerful. It could not have been the Sanskrit of the Dwapar age to which Krishna belonged. The Gita’s language is that of its author, not of Krishna. Therefore, it would be futile to believe that the Gita is a faithful reproduction of Krishna’s sermons. If Krishna was a non-Aryan god, he must surely have been speaking a non-Aryan language.
Krishna as a tool

The fact is that the Gita is a Dwij bullet fired from the shoulders of a Bahujan hero. The Gita is nothing except an astute reproduction of the Manusmriti. Then, the Gita’s Bahujan hero and Bahujan voice is silenced. And how? An arrow of a Bahujan Baheliya (bird-catcher) kills him. First use him and kill him – this is how the Gita lands a double blow. You have your cake and eat it too.

How to determine the Gita’s antiquity?
Today, when we have the means to measure the quantity of fluorine in archaeological remains, when we can measure the radioactivity in fossils and bones, when we can measure the magnetic pull of the Earth and accurately estimate the age of trees, it is useless to measure the antiquity of any mythological hero or object using an unscientific and arbitrary system of measuring time. That the Vedas were created at the time of the creation of the Universe or that one year of the gods is equivalent to 1,31,521 human days; that the Gita is more than 5,000 years old – all these things are imaginary. Many techniques have been perfected to ascertain the antiquity of books. The science of language (linguistics) says that in 1000 years, a language loses 19 of its every 100 words in its dictionary. This technique can be used to determine the age of the Gita.
(Paintings by Lal Ratnakar)