Before talking of feminism or the women characters of Maila Aanchal, it will be better to first talk about its writer, the famous novelist Phanishwarnath Renu. The relevant points of consideration are: Was he the protagonist of any particular political ideology? Did his sympathies lie with any particular group of characters? Does any character reflect his own dreams? Does any character represent his own persona?

If a literary work is guided purely by a political commitment, there is a real danger of it turning into a political treatise or a slogan. But that is not true of Maila Aanchal; though one can see glimpses of Renu’s political leanings in the novel. He loses his grip on the character of Kalicharan. On the other hand, Renu’s own class consciousness makes him sympathise with Tehsildar Vishwanath Prasad, the biggest exploiter of the village. The novel ends with the romantic and ideal love between Dr Prashant and Kamli, from which is born Nilottpal, their successor in the next generation. There is no reference to the next generation of Kalicharan in the novel and Laxmi (Baldev) and Phulia do not have anychildren, hence there is no question of a second generation.

Kalicharan could, in fact should, have been the hero of Maila Aanchal but Renu’s romantic idealism is expressed through Dr Prashant. After the birth of Nilottpal, Tehsildar Vishwanath Prasad, in full consciousness, gives land rights to some people – a gift of five to ten bighas of land. The question is whether the writer was dreaming of freedom from exploitation via the magnanimity of Tehsildar Vishwanath Prasad or his next generation. Could Renu not see the signs of the bloody, feminist struggle that was launched subsequently by some people to claim what was their right? Or was Renu seeking answers to the problems of Santhals in the large-heartedness of big farmers?

Deliberation on these points is necessary since, though Maila Aanchal is mainly a descriptive novel, there are events that form the backdrop of the novel and they would have to be the central point of any study of the feminist and non-feminist voices arising from within the novel. Just as the dominant castes control the means of production, they also ensure that the means of reproduction are also in their control – something that is necessary to protect the “purity of blood” in the caste-based society. In the society of Maryganj – and in other similar societies – the upper castes believe that they have absolute rights over labourers, women and the respect of the lower castes. Sahdev Misir believes that he has a birthright over Phulia of the Tantrima Toli. The lower-caste youth of Maryganj understand this phenomenon. “Arey ho budbak bamna, Arey ho budbak bamna, Chumma leve mein jat nahi re jaye” (Oh stupid Brahmin. Don’t you lose your caste when you kiss?).

But all this is not in the priority list of the party of Comrade Vasudev and neither does it form a part of the revolutionary agenda of Kalicharan. There is no simmering anger or rumblings of a revolution on these issues. Instead, the lower castes of Maryganj, in the name of caste identity, impose stricter restrictions on their women. The caste-based discrimination, which makes the lower castes the victims of the atrocities of upper castes, are used to impose the domination of men over women – to make women subservient to men. When Rampiriyan decides to become the maid of the new Mahant, the caste panchayat tries to restrain her but in vain. A panchayat is also held at the Tantrima Toli where it is decided that no woman of the toli will go to work in any house of Babu Tola. Similar restrictions are imposed in Gehlot Kshatriya, Kurmi Kshatriya, Poliya and Kushwah toli too. The reality, which Renu depicted in the India of 1950s, was reflected in Dharmveer’s norms regarding women. Sociologist Bernard Cohen’s study of the Shivnarayan sect says that an agreement was reached between the Thakurs and the Chamars of the sect under which, the Thakurs were supposed to give up their lust for the Chamar women. Thus, the caste identity is built and finds expression through women.

The Dalit women of Maryganj are relatively freer in economic, social and sex-related matters. Phulia sleeps with Sahdev Misir, Khalasiji and Patsun without any feeling of guilt. Rampiriyan ignores the panchayat’s directive when she decides to become the maid of the new Mahant. According to Kancha Ilaiah, “Dalit women are more liberated and mobile than Savarna women. From re-marriage to sexual relations, Dalit women enjoy greater freedom and liberty and that is because of their greater role in the labour relations.” The writer seems to be slightly biased against the sexual behaviour of Dalit women and this bias, which reflects in his writing, is indicative of the fact that he is an outsider. 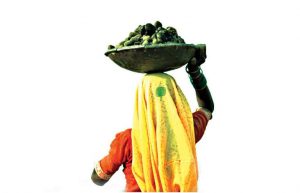 He seems to be too influenced by the fantasies circulating in the Savarna tolas. Of course, he does depict that as compared to Dalit women, the Savarna women enjoy much less freedom and liberty and this is in keeping with the superstitious and ugly character of the feudal society. The Brahmin astrologer allows his wife to die just because she cannot be operated upon by a male doctor, who will see her in a semi-naked state. A Rajput woman makes an appearance in the novel only when she beats her breasts on the death of Hargauri. In sharp contrast to Phulia’s sex life, Kamli’s pregnancy becomes a stigma for the whole family and threatens to soil the family’s honour. The society of Maryganj tramples upon the rights of women and crushes them just as in the decrepit society of North Indian villages, informed by feudal values and sexual urges. The villagers have resentment towards the mutt but at the same time, they also revere it. The Mahant, who subjects maid Laxmi to sexual cruelty, attains ‘Sadgati’ (spiritual liberation) in the eyes of the villagers. The writer alludes to conditioning of women to adhere to patriarchal and religious authority through the repentance of Laxmi. Meek surrender before religious and casteist regulations is the lot of the women in patriarchal societies. After becoming pregnant, Kamli is condemned to lead her life with a permanent feeling of guilt. Her father’s lamentations force her to do so.

In Indian villages like Maryganj, women are exploited vis-à-vis their capacity to work as well as to reproduce. Baldev and Kalicharan too are torn between the feelings of respect and guilt towards women. The faith of the dim-witted society in women is like the faith of the Baman, who fantasises on seeing the body of a sleeping woman but suppresses his feelings owing to some Gandhi-type fear. Of course, the Baman of Maila Aanchal is an ideal and clean-hearted character.

Barring the depiction of this horrifying reality, it does not seem that the novelist has put forth any ideal or has acted as a protagonist of feminism. He does not even succeed in projecting  Kalicharan as someone sensitive to atrocities against women and related issues, even though Kalicharan’s behaviour with women is somewhat proper and respectable. All the women characters of the novel are either victims of sexual exploitation or sexual incompatibility. They seem to exist only for the sake of the men. Except as an object of satisfying the sexual urge of men, they have no other role. Laxmi’s role is limited to starting a new family with Baldev and being a good wife. Kamli – like the heroines of Sharatchandra’s novels – seems to have been born only to love. And giving birth to Nilottpal is the be-all and end-all of her life. Mamta Shrivastawa is an epitome of sacrifice and idealism and her presence is only as a source of inspiration for Dr Prashant. The lady teacher of Charkha centre is the inspirational power behind Kalicharan. And Baldev sees ‘Bharatmata’ in Laxmi – a case of nationalism finding expression through personal relations. Women personify caste and nation and become the medium of expression of pride in caste and nationalism. Thus, women become the medium of expressing one’s love and respect for one’s caste or nation. The nation assumes a material form in the ‘mother’ and ‘lady-love’. Thus, this novel is entirely bereft of any clear feminine vision.