Since the beginning of civilization Shakti (cosmic power, often described as the feminine creative force) has been worshipped in its various forms such as capability, power, influence, strength and energy. Not just in India but in all the regions of the world. The entire mythology of the world has been woven with gods and goddesses who symbolize Shakti. Even today the importance of Shakti is indisputable. America can bully the whole world only because it has the maximum military power and wealth. Nobody listens to those who don’t have nuclear bombs; their voice carries no value. Only he succeeds in having his Gita heard who carries a Sudarshna Chakra in his hand. It is his forcefulness alone that carries any weight; and so does his politeness. Poet Dinkar has said, “Forgiveness is becoming of that serpent who also carries the poison/ Not of him, who has neither teeth nor poison, who is polite and a simpleton.”

A toothless and poison-less snake cannot even pretend to be civilized. His politeness, his forgiving attitude are all meaningless. The Buddha has said, “The weak cannot tread the right path.” Even in his non-violent civilization, it is permitted to hiss. In one of the Jataka tales, there’s an incident where a dangerous snake becomes a follower of the Buddha. Being a Buddha follower, he gave up biting people. When people came to know that he no longer bit they started stoning it. Even then it did not retaliate. When the Buddha met his blood-soaked follower, he was overwhelmed and said, “I forbade you to bite, not to hiss. People would have fled if you had just hissed.” 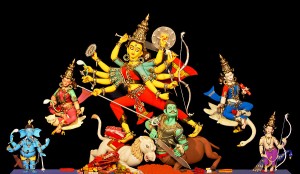 In India too there has been a long history of worshipping Shakti. But this history is not so simple. Complexities and confusions are aplenty. The symbol of Shakti evident in the Indus Valley Civilization is not the same one we see after the arrival and settling of the Aryans. The centres or symbols of Shakti kept changing with the pre-Vedic, early-Vedic, Vedic and post-Vedic periods. As the influence of Aryan civilization increased, its various forms also came to light. So if any contemporary Hindu considers Durga or any other goddess to be the first and the final symbol of Shakti, he or she is being childish. In the non-Aryan or Dravidian civilization of the Indus Valley Prakriti (feminine) and Purusha (masculine) were combined symbols of Shakti. That was an era of peace. In Marxist terms, the era just succeeding the primitive communist society. That civilization had developed enough for people to live in houses made of baked bricks and there were great baths and marketplaces.

Shiva must have been the leader of these copper-complexioned and flat-nosed people; a carefree, happy-go-lucky kind of hero. There was no Shakti worship in the civilization of these Dravidians. In any case, in advanced civilizations power is not an object of worship.

It was the arrival of the Aryans that set the stage for Shakti Puja. The peaceful, civilized Dravidian cow-rearers of the Indus civilization (note that Shiva rides a bull, which is born of a cow) were destroyed and pushed back by comparatively crueller horse-riding Aryans. Dravidians would not have given up easily. The battle between “gods” and “demons” is the same Aryan–Dravidian battle. Indra was the leader of the Aryans. Indra was also the symbol of Shakti. Vedic sages have praised this god, Indra, to the high heavens. At that time, Indra was the greatest god, the greatest hero of the Aryans. He was the Hercules of the Aryans. There is no mention of worship of any goddess during that period. Aryan society was patriarchal. Men had the upper hand. The position Prakriti (feminine) had in the Dravidian times had almost vanished. In the Aryan-dominated society, male supremacy carried on for a long time.

However, Indra continued to receive challenges from the Dravidians. If the cow-rearing Krishna has anything to do with history then his proverbial dark skin complexion likens him to a Dravidian hero. This Krishna also publicly opposed Indra worship. He established his own power instead. Shiva too was co-opted within the three main gods by Aryan society. Indra was totally discarded. From the orthodoxy of Bhartiya Jana Sangh to the limited liberalism of the Bhartiya Janata Party (BJP) and finally the National Democratic Alliance (NDA) structure, the Aryan society too changed along these lines. This pretension of liberality is necessary to expand. Like a George Fernandes or a Sharad Yadav, it was important to make Shiva the convener, because without that it was not possible to create a trouble-free kingdom. The Aryans tried to bring harmony by marrying their daughter to Shiva. When both the parties are strong there is harmony and coordination. When one is weaker, the other slaughters. Aryans and Dravidians were both in positions of strength. It was possible to attain harmony and coordination between the two. Where was the question of Shakti Puja? Shakti Puja happens after the slaughter. The victor becomes worship-worthy; the loser worships. Though a limited sense of worship exists in civilized societies as well, it is worship of the hero, not worship of the mighty. Only a weak, indolent, defeated society worships the mighty. Shiva worship is worship of a hero. Shakti Puja is not that. The worship of Ravan in the myths is Shakti Puja. It is adoring the powerful; singing hosannas to the mighty! 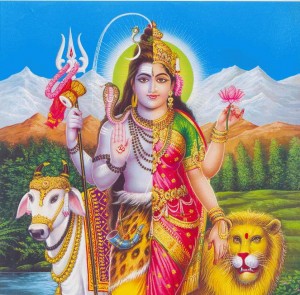 But what does it mean to worship Shakti as a goddess? The meaning is deep as well as simple. Matriarchal societies existed in eastern India, diametrically opposite to patriarchal societies in the western parts. Culturally, East is Banga (Bengali) land, which stretches to Assam. This region worships the goddess form of Shakti. One of the meanings of Shakti is vulva or vagina. Vagina is the centre of reproductive power. In ancient societies, during the yajnas (sacrificial fires) carried out to enhance fertility of the land, women were made to parade naked. In the East woman is traditionally considered to be a symbol of Shakti. This tradition was culturally used by Brahmins for their own ends. This was a well-thought-out campaign of the Brahmins to co-opt non-Brahmins into Aryan society. This can also be called the expansion of Aryan culture into the East. For expansion it was necessary to harmonize with the existing matriarchal society, the intermingling of patriarchal and matriarchal societies. Aryan society had to accept the importance of the feminine, had to underline its power. Goddesses, instead of gods, became important. This eastern form of Shakti was unprecedented for Aryan culture.

What is the Mahishasur-and-Durga myth?

So what is this myth of Mahishasur and Durga? Unfortunately, we have only looked at it from an elitist brahmanical perspective. I remember that after the 1971 Indo-Pak war and the creation of Bangladesh, the then Jana Sangh leader Atal Bihari Vajpayee referred to the then prime minister Indira Gandhi as Abhinav Chandi Durga (The New Chandi Durga). At that time, Communist leader Dange was still in control of his senses. He fiercely opposed it and said, “Atal Bihari fails to understand what he is saying and Mrs Gandhi fails to understand what she is hearing. Both must understand that Chandi Durga was a slaughterer of the Dalits and backward sections.” After this statement byDange, Indira Gandhi said in Parliament, “I am only Indira and that’s what I want to remain.”

The Shudra (and perhaps the unadulterated) reading of Mahishasur-Durga story goes like this. Mahish means buffalo. Mahishasur means the buffalo demon. Demon (asur) is different from god (sur). Sur means god. God means Brahmin or Swarna (upper caste). Surs do no work. Asur means those who work – in today’s parlance, workers. Mahishasur means people who rear buffalo, the buffalo-rearers. Those who trade in milk, the dairy people. Asur may have changed to Ahur and then to Ahir (the present-day milkman caste). Mahishasur or the buffalo-rearers must have been the people dominating the Banga region. Racially they must have been Dravidians. They must have also been opponents of the Aryan culture. Aryans had to defeat them. These people used Durga. In the Banga region, prostitutes mention Durga to be of their clan. Even today when one makes the Durga idol, some soil must be brought from the house of a prostitute. It took Durga nine nights to kill Mahishasur. The Brahmins who sent her waited nine nights with bated breath. This was a difficult task. If not force, deception. Force of deception. On the ninth night Durga tasted success, she killed Mahishasur. As they heard the news, the Aryans (Brahmins) were all agog. They swooped down on Mahishasur’s people and cutting their heads (munda) off made a new kind of garland. They put this garland around Durga’s neck. Even Indra couldn’t do what Durga had done. Parvati too only seduced Shiva, she did not slaughter him. What Durga achieved was miraculous. She was most important. Most blessed of all! The very incarnation of Shakti! 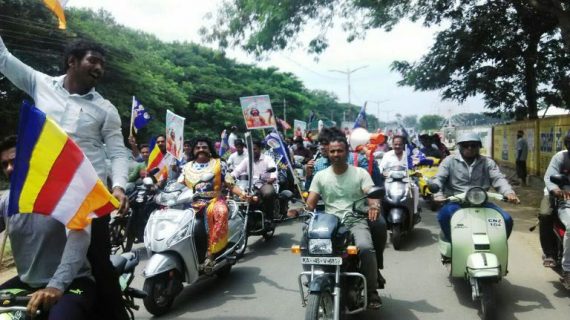 In North India, the tradition of observing Mahishasur Day on Sharad Purnima has developed over the past few years. This year, Sharad Purnima falls on 15 October. In other parts of the country, this day is observed either before or on Dussehra. Here, we read that Mahisha Dasara (Dussehra) was celebrated in Mysuru on 29 September