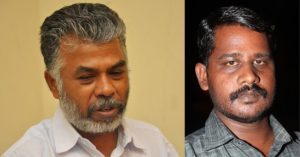 New Delhi: Novelist Perumal Murugan is not alone in facing the wrath of Tamil Nadu society. A few days after Ma. Mu. Kannan’s second novel, Kaana-inaavin Kanini, was released, residents of Kothamangalam in Pudukottai district, Tamil Nadu went on a rampage. They torched his hut and damaged his studio. Based on real-life experiences, the book talks about the decadence of society and deep-seated sexual perversion. “I have written only five per cent of what I have seen and experienced. The villagers might have feared that I would write about other things in the future,” Kannan said. He has not been allowed to rebuild his house.
Another writer in the district has received similar treatment. Durai Guna’s family was forced to leave Kulanthiranpattu village since caste Hindus did not like what he had written in his 40-page novella Oorar Varaintha Oviyam. His novel is about the predicament of a Dalit couple after their son and his friends beat up the priest of a temple of caste Hindus.