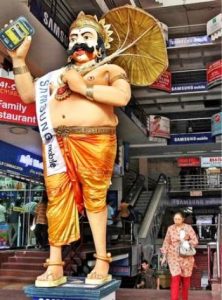 In God’s Own Country, the eve of the Malayalam month of Chingam (Aug-Sep) heralds a routine visit of the Asura King Mahabali and a grand cultural fete. Until the king is bidden good riddance for a year, he is overwhelmingly made to endorse the Grand Kerala Shopping Festival (GKSF) under the aegis of the people’s government. The duly crowned Mahabali with handlebar moustache, “sacred” thread (little thicker than usual) cutting across his pot belly, and palm-leaf umbrella – perfectly morphed to suit the interest of hegemonic castes – dazzles consumers of different tastes more than all the size-zero models put together. Moreover, the crowd is seen taking selfies with Mahabali impersonators. It is Onam time, the “accredited” state festival of Kerala. To my mind, there are not many festivals in India that have acquired such a secular character as Onam. For the Malayali diaspora, the festival appears to have become the sole source of their organic identity and pride.

Onam is a distinct popular festival of India, at least, for two reasons. Onam refuses any mythical interpretation for it and hence cuts across all social and religious groups as a futuristic festival that aims for an egalitarian society. Secondly, like any other festivals, Onam too bears the brunt of brahmanical appropriation. However, the Vamana-Mahabali myth – pervasively well known to us – that was sneaked in covetously by those who wish for hegemonic power is facing an angry backlash from both the common man and state government. The debate over the “claims” and “contexts” of the festival was sparked by a tweet from BJP President Amit Shah wishing the nation “Vamana Jayanti”, along with, not to miss, a depiction of Vamana, the fifth avatar of Vishnu, in the act of pushing Mahabali into the netherworld. This portrayal of Onam, according to the chief minister, was an insult to “Kerala, Keralite and Kerala culture”. Further, after a day’s hiatus, the chief minister asserted, “Vamana is a myth. Onam is a dream. A shared dream about a bright and egalitarian future.” Such “blasphemous” behaviour of the LDF government stoked up the indignation of Sangh Parivar, the keeper of Hindu savyata (civilization). 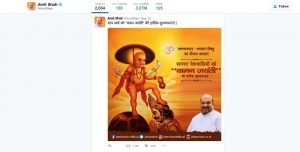 The debate over the “claims and contexts” of Onam began with a special issue published by Kesari Weekly, the Malayalam mouthpiece of RSS. The fundamental reason behind the special edition was, according to N.R. Madhu, the chief editor of Kesari Weekly and an RSS Pracharak, “to educate the Hindu community about the ‘actual’ legend of Onam”; and to save the “distortion of literature, political history and religion by the Left intellectuals”. He decries the “villainization” of Vamana in the strongest terms. To counter the distortion, he suggested that the “[deployment of] sanghi intellectuals” was expedient. Prof K. Unnikrishnan Namboothiri, the deployed intellectual, claimed, “The festival was originally celebrated as Vamana Jayanthi. Vamana did not send Mahabali to hell. On the contrary, the ruler was honourably rehabilitated to a place which is more comfortable than heaven.” He said Mahabali never ruled Kerala – that even Kerala did not exist in his time (as if myths are historical events!). “Parasurama, the sixth avatar of Vishnu, reclaimed Kerala from the sea and gave it to the Brahmins”, hence the myth of Mahabali stands null and void. What a scrupulous reasoning!

Onam is perhaps the only Hindu festival that commemorates a subaltern figure in public memory as a formidable king who stood for a utopian social order. Popular songs like Maveli naadu vaanidum kaalam/ Maanushar ellarum onnu pole (When Maveli ruled the land, all humans were equal) in Kerala and Ida pida javo, Balica rajya yevo (May the misery and agony go away, may the kingdom of Bali be established) in Maharashtra question the very foundation – the myth – of Hindu religion. Such demythicization defamiliarizes the “common sense” and seeks to establish that Kerala was once a casteless and egalitarian society. According to Ajay S. Sekher, “this feeds into modern subaltern perspectives”, which are becoming pervasive, specifically, in educational institutions with the ever increasing presence of Dalitbahujan students. Such questioning of the received myth has unsettled the Sangh Parivar, 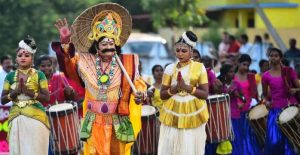 Journalist Minu Ittiyipe says this line of argument, “by implication reduces Vamana, one of the avatars of Vishnu, the supreme God of Hindus into a villainized figure”. N.R Madhu, like any other Sanghi, condemns such villainization of Vamana. He has no doubt that “this is what happened in JNU, where they celebrated Mahishasura on Navratri”. The subaltern rereading of the myth and the glorification of an Asura king raises doubts over the characters that signify the cultural hegemony. Those who understand the politics of the day would certainly have recognized that the recent crackdown on Jawaharlal Nehru University and Hyderabad Central University was more to do with Dalitbahujan assertion and villainization of mythic gods and goddesses than “seditious” students![1]

Apart from the popular myth of Mahabali, there are other folklores.[2] Irrespective of narratives, the downtrodden perceive Onam as symbolic dispossession of subaltern icons by brahmanical forces. D.D. Kosambi’s book Myth and Reality explains how myths were crafted by brahmanical agencies to perpetuate caste order.[3] The Hinduization of Jagannath, which initially was a local tribal deity, and turning it into a pan-Odisha cult figure shows the way hegemony works and survives its age-old social structure. Co-opting Gotama, the Buddha, as an avatar of Vishnu, while obliterating Buddhism itself from India is undoubtedly the height of brahmanical treachery.

The struggle against brahmanical hegemony (varnasrama) began a long time ago. However, the fight against this monolithic culture has become more complex and uncertain, because this culture has the ability to use the market (most of the festivals have become the prime source to inflict consumerism among the masses) to produce hard-to-break structures. Facilitating this process is our limited democracy that still reflects many characteristics of caste domination. Now, as we know, when Dalitbahujan perspectives are making inroads into public platforms and launching a discourse of their own, it becomes inevitable for the learned scholar to consider the path of Phule and Ambedkar. Without their framework, we would entangle ourselves trying to disentangle the brahmanical webs.

[1] For more on this, see “Bahujan Discourse puts JNU in the Crosshairs”, Forward Press, March 2016.

Panchendra Kumar Naik ‘Pankaj’ is a doctoral scholar at the Centre for Development Studies, Trivandrum, Kerala. 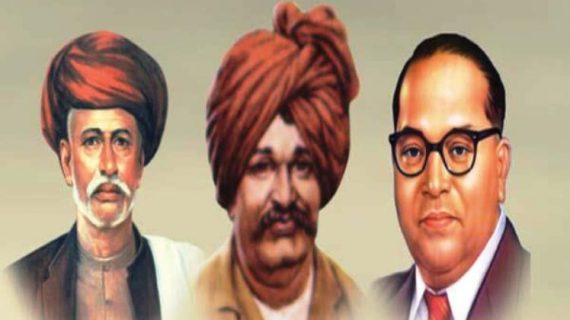 Shahu: A crucial link between Phule and Ambedkar

In his short reign of 28 years, Shahu succeeded in introducing radical social and legal reforms that had far-reaching consequences for the marginalized and the dispossessed. In the process, he also took the mantle from Phule and passed it on to Ambedkar