Adolf Hitler, one of the most hated men in human history, uttered an eternal truth: “The great masses of people will more easily fall victim to a big lie than to a small one. Especially if it is repeated over and over.” Those who fool the masses in the name of religion and patriotism are the biggest beneficiaries of their own pretentious deeds and designs. The victims of deception – the great masses – cannot conceive, much less demolish, them because the cheats are defended and protected by strong walls that their powerful devotees and state authorities constitute. This has been the unfortunate experience of India for ages. It will continue for many more decades. Illiteracy and ignorance has to be perpetuated for the benefit of the charlatan and deceiver. 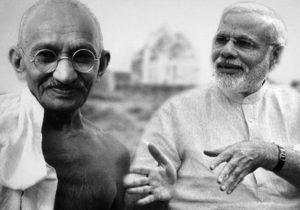 The enemies of the nation struck the innocent masses long ago. One of the trendsetters was a man who is revered today as a saint and apostle of non-violence, as the father of the nation. It is unfortunate to have to hold such a man of history responsible for fooling the lowliest, the most underprivileged and accursed souls on earth.

See the level of his hypocrisy: “The Sudra, who only serves (the higher castes) as a matter of religious duty and who will never own any property, who indeed has not even ambition to own anything, is deserving of thousands obeisance. The very gods will shower down flowers on him.”[1] This squarely fits into Hitler’s aforementioned prescription and prognostication! None questioned him. Placed on a high pedestal, he is beyond reach of the common man. He went unchallenged. Any attempt to accost him will be shouted down. Questioning him or his wisdom is viewed as blasphemy, an inevitable sign of slavery of thoughts. He has left even the malicious Manu miles behind in putting a glow on the chain of slavery for the Sudra. A known enemy with an open sword in hand is better than a deceitful angel reciting scriptures.

Then the Mahatma expresses his love for the Bhangis: “I have often declared that if I am destined not to gain redemption in this very birth it is my aspiration to be born as a Bhangi in my next birth. I believe in varnashram and in both janma and karma (birth in particular caste and fate fixed by actions in past births) associated with it but I refuse to believe that a Bhangi is a sinner. I have, on the contrary, seen countless Bhangi who deserve my veneration and many Brahmans whom it becomes very difficult task to adore. I shall be able to render more service to Bhangis by being born as a Bhangi and be able in addition to make other communities see the light in the matter than I can to the Brahmans or recluses by being born as a Brahman. I wish to serve the Bhangis in numerous ways. But I do not wish to advise them to detest and hate Brahmans. Hatred, disgust causes deep pain. I do wish the uplift of the Bhangis but do not regard it my duty to teach them to wrest their rights by the way of the West. It is not our dharma to gain anything by that method.”[2]

The gloss of theology applied on this despicable declaration is awe-inspiring. The intellectual class, because of its vested interests, usually presents national heroes fully sanitized and artfully done up, erasing every trace of ugliness from their action and character, hyping their idiosyncrasies as the height of transcendental accomplishment and spiritual wisdom. The fiction of “next birth”, rebirth and transmigration is the most horrible and unmitigated humbug propagated in the Hindu scriptures with no scope for verification, scrutiny, monitoring, or auditing. 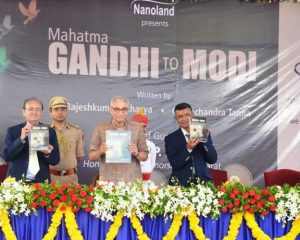 Decades later, then Gujarat chief minister picked up on these lies to explain his government’s plan for the Bhangis. “I do not believe that they [Valmikis] have been doing this job to sustain their livelihood. Had this been so, they would not have continued with this type of work generation after generation. At some point of time, somebody must have got the enlightenment that it is their [Valmikis’] duty to work for the happiness of the entire society and the gods; that they would have to do this job bestowed upon them by gods; and that this job of cleaning up could continue as an unintentional spiritual activity for centuries. This should have continued generation after generation. It is impossible to believe that their ancestors did not have the choice of adopting any other work or job.”[3]

How touching, that from the same sacred soil of Gujarat, two great leaders, one born after the other’s death, expounded the same core belief.

The cost of Gandhi’s love for the Harijans

We may underline the deep imprint Bhangis had left on Gandhiji. By laborious research, Larry Collins and Dominique Lapierre exhibited a glimpse of his love for the despised section of humanity. Sarojini Naidu, poetess, orator and freedom fighter, was “one of Gandhi’s closest associates”. In fact, Gandhi dubbed her the Nightingale of India! Shortly after his arrival in Delhi, Governor-General Lord Mountbatten asked the poetess during a meeting whether, in view of the poverty in which Gandhi adamantly chose to live, the Congress party really could protect him. “His effort was not without disadvantage to the Congress party,” he said. “Ah”, she heartily laughed, “you and Gandhi may imagine that when he walks down Calcutta station platform looking for a suitably crowded third-class carriage that he is alone, he’s unprotected. What he does not know is that there are dozen of our own people dressed as untouchables walking behind him crowding into that carriage.” The poetess let the cat out of the magic bag. She told Mountbatten: “When he moved into the Bhangi colony in New Delhi, a score of Congress workers again unscrupulously clothed as Harijans were sent to live with him. My dear Lord Louis, you will never know how much it has cost the Congress Party to keep the old man in poverty.”[4] India’s nightingale had finally sung the truth of her Mahatma! Poor Mahatma, how he was taken for a ride by his own Congress Party!

The Mahatma’s paternal love for the Untouchables extended to protecting them from themselves. Rameshwar Agnibhoj, a graduate and a well-known freedom fighter, was elected, and was included in the Cabinet formed by Dr Narayan Bhaskar Khare, who was the chief minister (then called Prime Minister) of the Central Provinces & Berar from August 1937 to July 1938. Gandhi publicly admonished Khare for his action, saying he “was opposed to the creation of such high ambitions among persons belonging to the Scheduled Castes.”[5] A chastised Khare dissolved his Council of Ministers and fell in line immediately to please the inveterate Congress dictator! Obviously, the Mahatma knew best: ambition in Untouchables is bad but good when it came to the twice-born meritorious.

Let a day be earmarked for celebrating both the hypocrisy and deception of the Mahatma without resorting to symbolism.