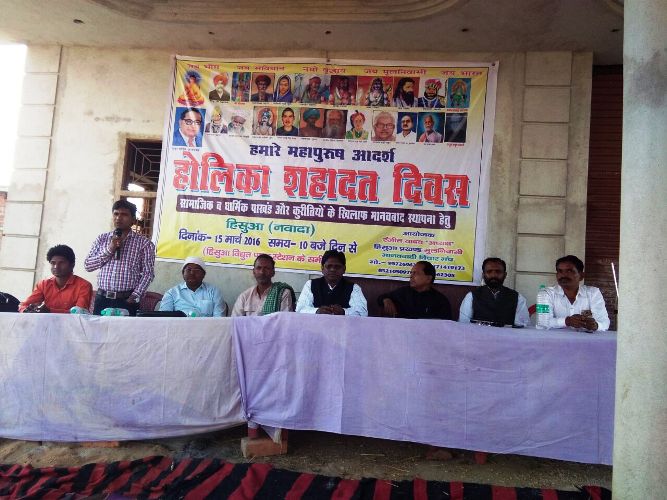 On 15 March, Holika Martyrdom Day was observed under the aegis of Manavvadi Vichar Manch in Hisua, Bihar. A function was held near the power sub-station on Gaya Road. Addressing the function, Upendra Pathik, a senior leader of Arjak Sangh, said, “Distorted history was thrust down our throats and we were exploited in the name of festivals. It is not justified to celebrate the murder of a woman. Buddha, Kabir, Emperor Ashoka, Phule, Ambedkar, Ramswaroop Verma, Jagdev Prasad, etc are our guiding lights and icons. Our ancestors were branded as asur, daitya and rakshas.” Umesh Baudhha quoted from historical works to argue that the Dalits and the OBCs have been ruthlessly exploited socially, culturally, economically and politically for ages. Dharmendra Paswan, Ramvriksha Mochi, Chandan Choudhary, Lalan Manjhi, Manoj Yadav, Ram Narayan Choudhary, Arvind Manjhi, Sanjay Yadav and Manoj Kumar also spoke at the function. The consensus was that we Bahujans should not celebrate the murders of Holika and other Dalit and OBC rulers, including Mahishasur, and that history needs to be rewritten.

Ranjit Yadav chaired the function and Mosaphir Kushwaha compered it.