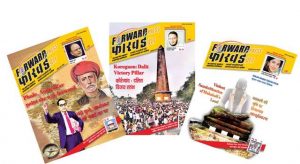 Gorakh Pandey had written this poem around 1975. At least with regard to Bahujan movement, it is more relevant today than when it was written. The Brahamanical system that dominated this country for five thousand years only brought hatred, humiliation, exploitation, oppression, fraud and deprivation for the Dalits-OBCs. It was only after the country became a republic in 1950 and adopted the Constitution drafted by Babasaheb Ambedkar that the Dalits, Tribals and OBCs had access to education and the right to an independent socio-economic existence. For thousands of years, the voice of these deprived sections was suppressed. But when, equipped with constitutional rights, these communities began revealing their tales of misery and wretched existence, the dominant sections termed it as an attempt to ‘stoke fire’. The voice of the oppressed sections is not merely a complaint or a cry of agony. And neither is it only an expression of their angst. It is also a cry for socio-economic-political transformation.

It is not that the voice against injustice and domination is being raised for the first time. When, 2500 years ago, Tathagat Gautam Buddha raised the banner of revolt against the exploitative Vedic system, the Brahmanvadis pounced on him. This revolt, however, kept on resurfacing from time to time through the words and deeds of the likes of Kabir, Raidas, Swami Achootanand, Narayan Guru, Jotiba and Savitribai Phule, Periyar, etc. The opposition never abated. Among the tribals, warriors like Siddho-Kanho, Tilka Manjhi, Birsa Munda, Tantya Bhil, Govind Guru, Rani Durgawati, Shankar Shah-Raghunath Shah and Rani Gidalu fought tenaciously for their rights and even laid down their lives. In modern India, Babasaheb Ambedkar had to struggle at every stage in his life but he never let his voice of resistance fade.

To sum up, a fearless expression of resistance has been the tradition of the Bahujan community. That is why Dalit literature today, inspired by the Ambedkarite ideology, has a noticeable presence in Marathi, Hindi, Gujarati, Punjabi, Kannada, Malayalam, Tamil, Telugu and almost all other Indian languages.

But initially, Dalit literature had to face stiff opposition from Dwij litterateurs, who also tried to ignore it. What was surprising was that the Savarna leftist writers almost universally opposed Dalit literature. But the casteist barriers could not stop Dalit literature and the movement, infused as they were with radical ideas. And the caravan continues to march ahead.

The sociopolitical consciousness that arose among the SCs, STs and OBCs, courtesy of the constitutional provisions, only strengthened the Bahujan voice of resistance. Inspired by their ideological icons, these groups now intend to reanalyze and reconstruct their culture, literature and history. It seems the Bahujans want to settle scores for what they went through in the last five thousand years. Finding that their existence is not even acknowledged in the history, culture, literature and social structure of the country, they want to build a new social system based on equality.

Apparently, the Brahamanical order fears that such a move may end its domination. It fears that the sleeping dogs may get awakened. That is why an urgency informs their efforts to spread religious-social pollution through superstitions and rituals and to crush the Bahujan resistance. They are fearful. They are desperate. And that is why they are using cowardly stratagems of oppression. But, probably, they are not aware that this resistance of the dominant forces would lend new energy to the Bahujan movement – just as was the case with Buddha, Kabir, Birsa and Ambedkar. The Bahujan movement should be ready for bigger challenges and should hone its battling skills; it should prepare itself well and sharpen the edge of its ideological assault. Only this will make the Ambedkarite dream a reality.