The year 1991, when Dr Manmohan Singh presented his first budget as the finance minister, is almost unanimously regarded as the beginning of the era of economic liberalization in India; however, much of the groundwork in this respect had been done by Vishwanath Pratap Singh, who held the finance portfolio in the ministry of Rajiv Gandhi.

It is implicit in the word liberalization that prior to it, the economy was illiberal or non-liberal. Hence, before we talk of liberalization, it would be better to enumerate the features of the system that prevailed earlier. In their discourses on this issue, the economists invariably make the year 1947 as their starting point; as if, prior to 1947, India did not have any economic system! That is partly because the primary emphasis is on finding fault with the Nehruvian economic model, with its emphasis on a “socialist” model of growth. This policy was adopted at the All India Congress Committee (AICC) in 1955.

On 8 December 1951, the then prime minister Jawaharlal Nehru tabled the first five-year plan in Parliament. In this plan, the emphasis was on irrigation and power (27.2 % of total outlay), agriculture and community development (17.4%) and transport and communication (24%). Only 8.4 per cent of the outlay was to be spent on industries. The first five-year plan can hardly be described as  “socialist”, but it achieved 3.6 per cent annual GDP growth rate against the targetted 2.1per cent. This was the beginning of the economic growth of India, which had just thrown away the imperialistic yoke. In a country like India, it would be unfair to measure economic growth in terms of increase in per capita income. That is because here, the population does not grow – it explodes. But still, the per capita income went up by 8 per cent in the first five-year plan period. In the last year of the first plan, in an ambitious step, five IITs and the University Grants Commission were established. 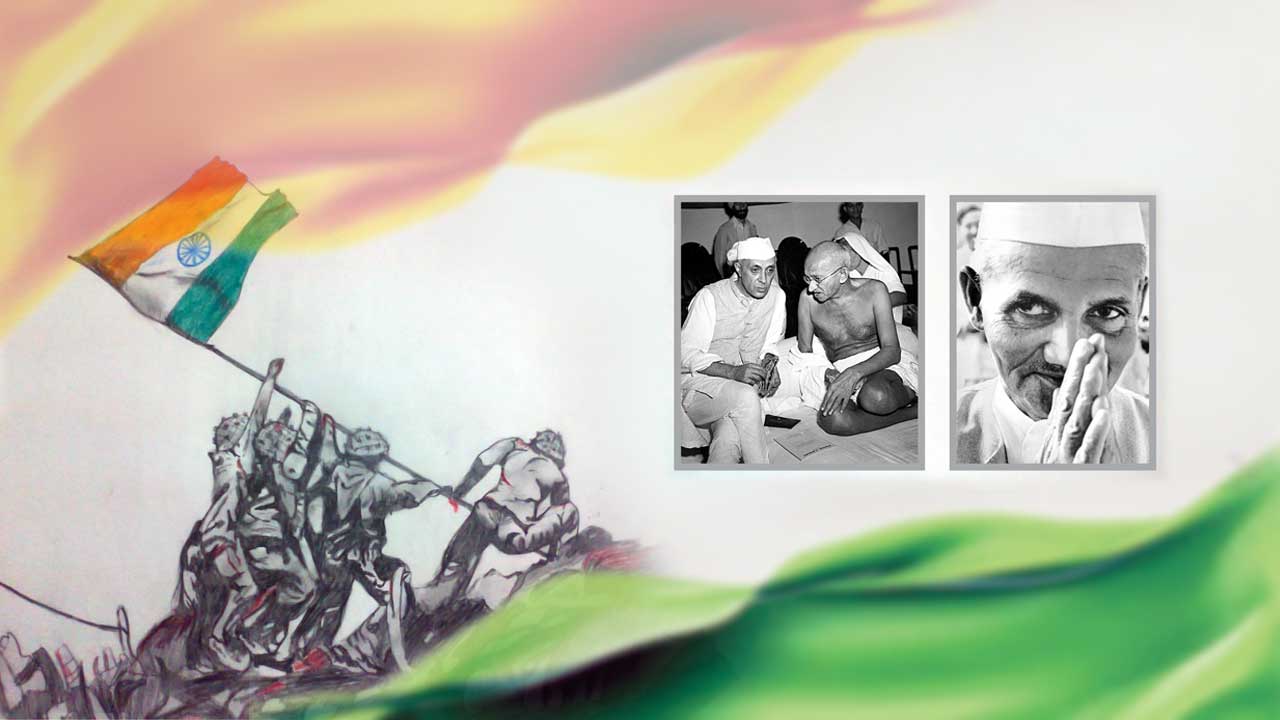 Nehru was firm in his opinion that strengthening the knowledge base was a pre-requisite for infrastructural development of the country. Riven by caste and communities, Indian society was enveloped in the darkness of ignorance. Broadly speaking, India was the home to blind followers of Brahaminsm and Islam, notorious the world over as a repository of retrograde beliefs. The people of this country lacked a scientific temper. So much so that the freedom movement drew strength from the mythical and communal concept of ‘Bharat Mata’. It was this thinking that led to Independence with partition or partition with Independence.

For growth and development, it was necessary to change the mindset of the nation. Nehru emphasised on a scientific temper and on this was based the second five-year plan, which laid emphasis on industrialization. If Bhakhra and Hirakud were the symbols of the first five-year plan, the steel plants of Bhilai, Durgapur and Rourkela represented the second plan.

In short, India’s economic growth was linear. A backward, agriculture-dominated country had to join the league of industrialized nations. Huge population, illiteracy, feudal mindset and a power structure dominated by upper castes made this task a taxing one. Around 1960, Nehru felt that some crucial sectors were neglected in the second five-year plan. Hence, in the third five-year plan (1961–66), the emphasis was again on agriculture. The execution of the two five-year plans between 1951 and 1961 and the designing of the third five-year plan reflected the wisdom of our economic planners. After building the basic structure for agricultural and industrial growth, Nehru again focussed on agriculture because he wanted to prepare the ground for the industrialization of the nation. Strengthening the farm sector was a pre-requisite for industrialization and the economists of the Nehru era knew this very well.

It was not as if everything was smooth for Nehru. The retrograde forces, posing as Gandhians, did not want Nehru to industrialize India. That is because the industrialization of India would have destroyed their poetic, romantic old way of farming in India. Or, at least they apprehended that it would. The priestly and feudal classes drew their strength from this old-style farming.

The orthodox Gandhians were not ready to give up their blind opposition to the British. They believed that before the advent of the British, India was a great country. They were not willing to study and analyze the conditions that prevailed in the country before the arrival of the British – the conditions that helped Britain to establish its rule over India. They were enamoured by the feudalism that prevailed in the Mughal era. Indian society was subjected to complex stratification during the Mughal era. Casteism, which was confined to Hindu society, struck roots among the Muslims, leading to tragic results. That was the era when the world, especially Europe, was embracing knowledge and science. Whereas universities were being build in Europe, Indian rulers were building forts. In the 13th century, when Oxford came up in England, Nalanda lost its status as a centre of learning. 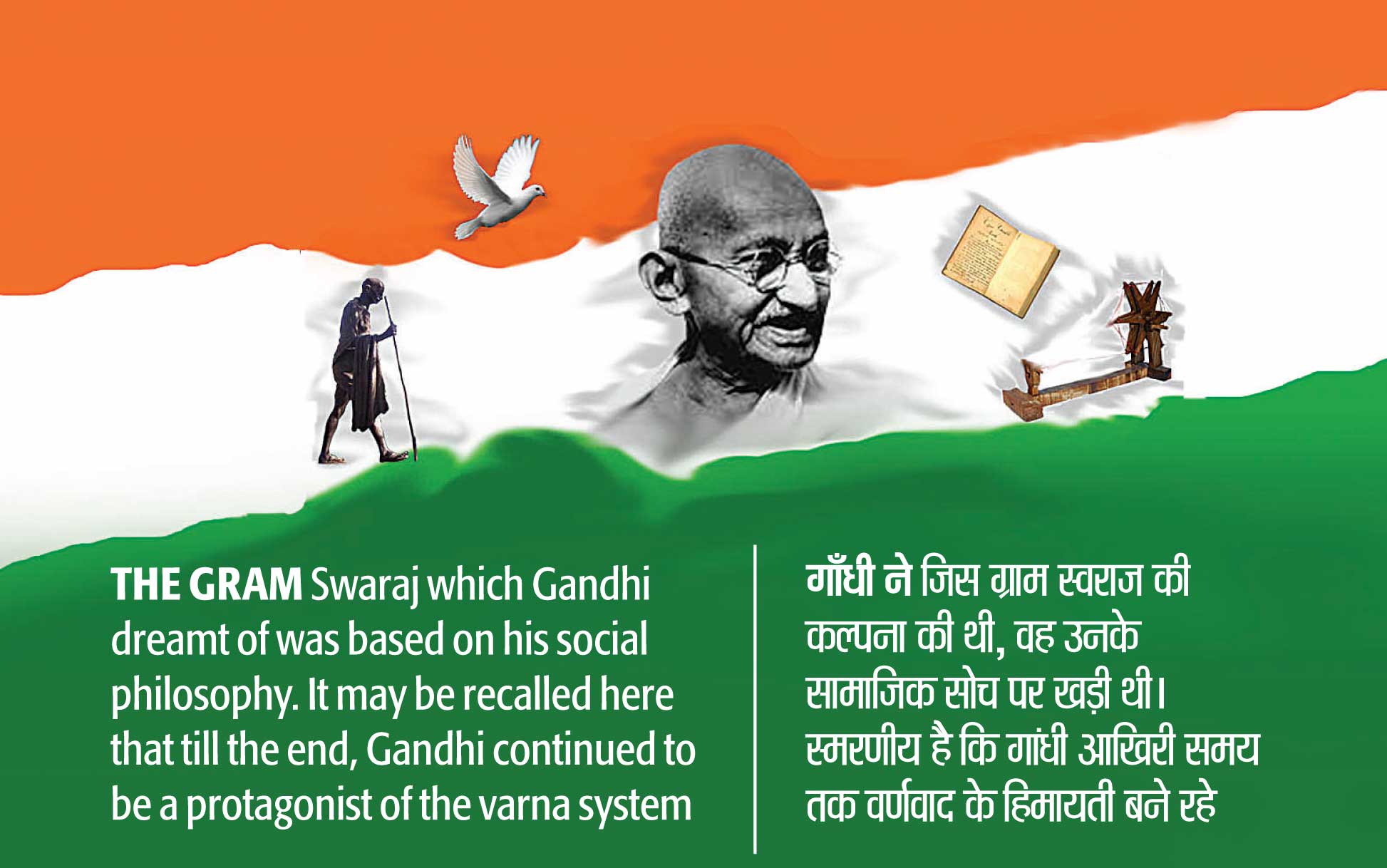 It was not possible for India to revert to the old ways. The thought of reverting to a village-based economy was like a return to Arcadia – romantic but impracticable – because democracy was not compatible with it. The Gram Swaraj which Gandhi dreamt of was based on his social philosophy. It may be recalled here that till the end, Gandhi continued to be a protagonist of the varna system. His Hind Swaraj (1909) is a retrograde social philosophy, which, in the name of opposition to railways, doctors and lawyers was, in fact, opposing technology, science and logic. The Manuvadi social set-up would have remained intact under this system. And it was impossible to build a modern society on this foundation.

Nehru rejected the Gandhian concept of Gram Swaraj – which, incidentally, was rejected by Congress’ moderate leader and Gandhi’s guru Gopal Krishna Gokhale much earlier. But the neo-Manuvadis saw something great in the philosophy of Hind Swaraj. This tug-of-war between Gandhian and Nehruvian thought continued. Nehru had adopted the right path. The public sector, the foundation of which was laid in the second five-year plan, was to yield excellent results – and it did – but in the meanwhile, a disaster intervened.

The Indo-China war of 1962 forced India to alter its priorities. The retrograde social forces got an opportunity to rubbish Nehru and his policies and they did it with great vehemence. The policy regarding heavy industries was not criticized as much as the fundamental changes initiated in the farm sector. Land reforms were in the jurisdiction of the state governments, which were in the firm grip of feudal forces. In most of the states, land reforms were put on hold. The agricultural revolution that took place sans land reforms, usually labelled the ‘Green Revolution’, only served to strengthen the hold of feudals in the rural areas.

Nehru passed away in 1964. The humiliation which India suffered in the Indo-China war was more than compensated by India’s victory in the Indo-Pak war of 1965. Lal Bahadur Shastri emerged as the new hero of the Indian middle class, which was made up of three-fourths of upper castes and one-fourths of middle castes. The retrograde forces had just begun to celebrate the end of the Nehruvian era when Shastri breathed his last at Tashkent. That paved the way for the advent of Indira Gandhi.

First attempt made in Indira’s tenure

Indira Gandhi could not have become a tool in the hands of retrograde forces but at the same time, she could not engage them as Nehru could. In 1966 – the year in which she took over – on 8 June, her finance minister Sachindra Chaudhary tried to bring the economy back on track by devaluing the rupee by 57.5 per cent. This was the first attempt – nay, daring act – to bring the Indian markets in sync with the global market. A similar attempt was made in 1991 by Dr Manmohan Singh, when he devalued the rupee twice. 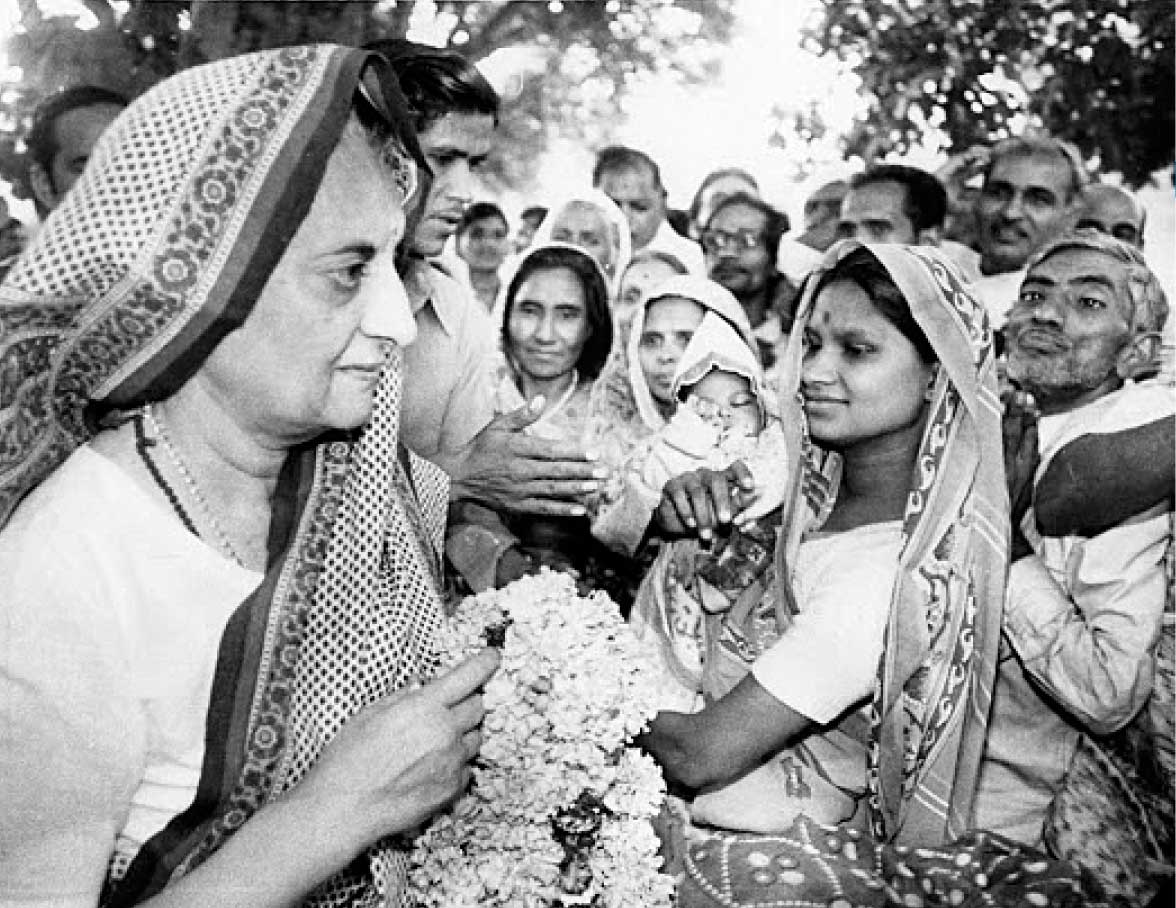 But the Indian mindset was not ready for this. In fact, at that time, very few people could comprehend the meaning of devaluation. The Marxist parties were against Congress at that time and they berated Indira Gandhi for the rupee devaluation in the campaign for the 1967 polls. At that time, at the global level, the Soviet Union was a super power. The world had not yet become uni-polar. The devaluation of the rupee was widely perceived as the outcome of American pressure and Indira Gandhi was forced to face the approbrium.

Compelled by the circumstances, the Prime Minister decided to go for shock-treatment. In 1969, she nationalized private banks and abolished the privy purses being paid to former rulers. The retrograde forces got alarmed. They apprehended that Indira Gandhi may nationalize agricultural land also. But it is painful that Indira Gandhi did not pressurize even the states ruled by the Congress to introduce comprehensive land reforms. A retrograde voice emerged in her own home in the form of Sanjay Gandhi. By 1980, Indira Gandhi had given a go-by to socialism. Now, she had become ‘Bharat Mata’ herself. She no longer needed the veneer of socialism. Indira was in a new avatar and a new mood. She no longer cared for the Dalits because the middle class was hailing her. In the period between 1980 and 1984, the ground for new economic policies was laid. In 1984, the ‘Raja’ [kingly] finance minister of Rajiv Gandhi made the direction India was to take clearer. In 1991, the economist finance minister in Narsimha Rao’s government, Dr Manmohan Singh, initiated the policy of economic liberalization to align India’s economy with the global one. By that time, the Soviet Union had collapsed. The Red Star had disappeared from the Kremlin. The world had become uni-polar, with America emerging as the sole super power. And the Indian economy had embarked on a new path. 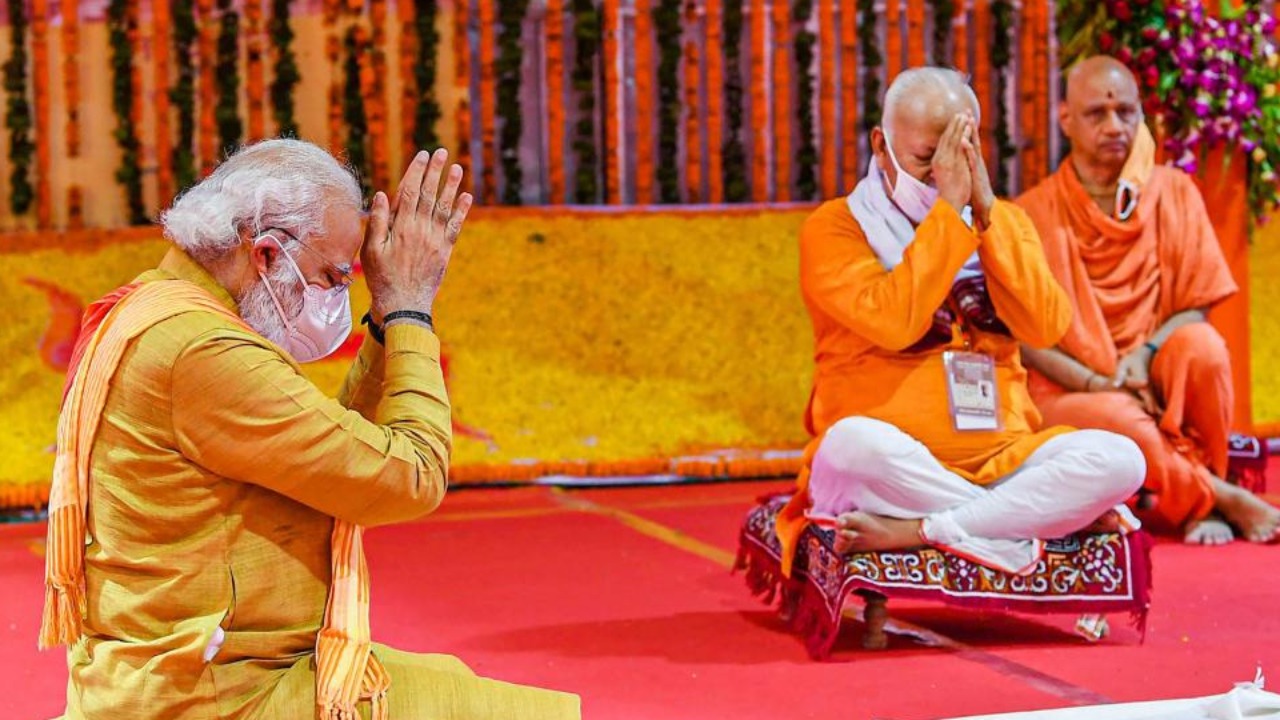