A spectre haunted the Hindu right in Chhattisgarh: the spectre of Adivasi and Dalit or “moolnivasi” (original inhabitants) independence from the brahmanical fold. All the powers of the old order entered into a holy alliance to exorcise this spectre: the Rashtriya Swayamsevak Sangh, local traders, the media and above all, the police.

On 15 September 2016, Manish Kunjam, the Sukma-based national president of the Adivasi Mahasabha, forwarded a WhatsApp message to a group he was part of. The message retold the Adivasi version of the conflict between Durga and Mahishasur, a moolnivasi king. The forward noted that in Bengal, Durga idols are considered incomplete till earth is brought from the house of a sex worker. The message went on to explain the origins of this practice, saying that the Brahmins, being unable to fairly defeat the brave Santhal raja, Mahishasur, in battle, sent Durga as a beautiful woman. She plied him with alcohol and other amusements for eight days till on the ninth day, seeing her chance, she killed him. The message said that the Brahmins not only defeated the moolnivasi raja, but also made the Adivasis worship his killer, Durga (an incarnation of Shakti, who is being seen as a brahmanical appropriation of an Adivasi mother goddess). It also asked readers whether deities/demons with several arms and half-animal bodies could actually exist as humans, and to think rationally about these depictions. Finally, it addressed the moolnivasis – who had been prevented by Brahmanical ideology from reading for themselves – to awake and recognize their ideological subjection. The message ended with the words, ‘Namo Buddhai, Jai Bharat, Jai Moolnivasi’.

Many traditions, many contradictions

Had the sender not been Manish Kunjam, who is the leader of the Communist Party of India (CPI) in Bastar and an ex-MLA, the WhatApp message might have remained one of the main stories in circulation on social media describing an alternative version of history and myth, just as oral narratives circulated through the vast subcontinent with many different contradictory versions of the Ramayana, including those where Ravana emerges as the hero, and Sita a victim at the hands of a misogynist Ram.

The proliferation of Mahishasur festivals across the country may be a recent phenomenon, but the worship of Mahishasur has an old and widespread history. The Asurs of Jharkhand and West Bengal regard him as an ancestor and treat the nine days of Navratri as a period of mourning. In Mahoba, in Bundelkhand, there is an ancient Mahishasur temple that has been given protection by the Archaeological Survey of India. Santhals have held a public puja for Mahishasur on navami in Purulia district for at least the past 12 years.

The Durga-Mahisasur debate had come up in Parliament even before Smriti Irani raised the Durga-Mahishasur issue. But whereas Irani brought it up to show the “depraved” mentality of Mahishasur devotees, Indira Gandhi had earlier allegedly accepted the point that Durga had killed Dalits and Adivasis and refrained from accepting a comparison with her.

Unfortunately, the Congress cannot be relied on to be consistently secular, and when the news of Manish Kunjam’s WhatsApp forward got around, the Youth Congress in Bastar took umbrage and its leader, Sushil Maurya, registered a complaint against Manish Kunjam in the Kotwali police station in Jagdalpur. Not to be outdone, a little known outfit called the Dharmsena filed a complaint in Sukma, and the police promptly registered an FIR under Section 295 of the Indian Penal Code (intentionally insulting the religion of a particular class).

Many local traders, all of whom are immigrants from Hindu upper castes and have exploited the Adivasis for years, looking down on them as “backward” and “uncivilized”, went to town over the supposed insult. Effigies of Manish Kunjam were burnt at various places and on 19 September 2016, the traders and police jointly ensured a bandh of Sukma town.

However, Manish Kunjam is also the district secretary of the CPI, and one of the best known Adivasi leaders in the area, who has consistently fought against Salwa Judum and police atrocities under Operation Green Hunt, against displacement by mining companies in Bastar, and for the introduction of the Sixth Schedule of the Constitution, which would better guarantee Adivasi rights than the Fifth Schedule has done.

Once the news got around that their leader was being targeted, all the moolnivasi communities of Bastar began to protest. There are several Adivasi communities in Bastar – Halbas, Bhatras, Koyas (Gonds), Dhurwas – and several groups that are classed as SC or OBC like the Maharas, Pankas, Rauts and others, who collectively regard themselves as Bastariya. The CPI has tried hard in recent years to bring them under the common banner of moolnivasi, in its struggle for the Sixth Schedule. There are also umbrella bodies like the Sarv Adivasi Samaj or Sarv Samaj.

Significantly, all of them issued statements condemning the case against Kunjam. For instance, the Koya Samaj said that Mahishasur is worshipped in Bastar and the FIR is an attempt by some forces to impose their brahmanical Hindu ideology on weaker sections like Adivasis. They said that Adivasis have the right to worship whoever they like, and it should not concern anyone else. They also pointed out that the entire case has been drummed up to weaken the Adivasi struggle for jal, jangal and zameen (water, forests and land) in which Manish Kunjam had been a primary voice. Another press release issued on 22 September 2016 by the Sarv Adivasi Samaj also strongly condemned the FIR against Kunjam and called for an FIR to be registered under the SC/ST (Prevention of Atrocities) Act against those who levied the charges in the first place.

The provisions of the Act certainly seem to be attracted in this case, with its effigy burning and other attacks on a respected Tribal leader, quite apart from the way in which the gory killing of Mahishasur is depicted and celebrated. Section 4 of the Amendment Act adds the following to Section 3:

(p): institutes false, malicious or vexatious suit or criminal or other legal proceedings against a member of a Scheduled Caste or a Scheduled Tribe;

(t) destroys, damages or defiles any object generally known to be held sacred or in high esteem by members of the Scheduled Castes or the Scheduled Tribes.

Explanation. –– For the purposes of this clause, the expression “object” means and includes statue, photograph and portrait;

(u) by words either written or spoken or by signs or by visible representation or otherwise promotes or attempts to promote feelings of enmity, hatred or ill-will against members of the Scheduled Castes or the Scheduled Tribes;

(v) by words either written or spoken or by any other means disrespects any late person held in high esteem by members of the Scheduled Castes or the Scheduled Tribes;

shall be punishable with imprisonment for a term which shall not be less than six months but which may extend to five years and with fine.”

The Sukma Koya Samaj called for a bandh on 26 September 2016, and in the meantime, irate villagers attempted to shut down weekly markets in Nama (September 20), Korra (September 21) and Kukanar (September 23). Predictably, the police worked with traders to foil this, and the media dutifully reported it as a case of poor traders being done out of business and of disappointed village shoppers. Never mind that the same people who were sending these WhatsApp messages condemning the market closures were the same Salwa Judum/Samajik Ekta Manch/Agni leaders who shut down weekly markets for years during Salwa Judum and still prevent villagers from the interior visiting markets.

This was not the first time an attempt to insult Adivasis boomeranged on the Hindutva forces in Chhattisgarh. Earlier in 2016, journalist-cum-social activist Vivek Kumar in Manpur, Rajnandgaon, was kept under arrest for two months for a Facebook post on Durga and Mahisasur that he had posted two years previously. A 12 March 2016 rally by Hindutva forces shouting “Mahishasur (Bhainsasur) ki auladon ko, jutey maro salon ko” (“it’s time to hit the followers of Mahishasur with shoes”) then resulted in a counter FIR against them.

In 2014, the Delhi police had raided the office of Forward Press in Delhi, for publishing articles on Mahisasur and filed a case against its editor Pramod Ranjan. However, this has only made him more determined to research and spread the word on Mahisasur and other suppressed Bahujan heroes.

A clearly shaken administration that has always sided with upper-caste immigrants against the Adivasis and Dalits they are constitutionally charged to serve tried to mobilize the traditional pargana majhis – or headmen – against Kunjam. Many of these people had left their villages after Salwa Judum and started siding with the administration.

It remains to be seen who will win in this battle between the state-backed forces of the Hindu right and a resurgent adivasi population.

This article first appeared in The Wire on 25 September 2016. It has been republished here with the permission of the author 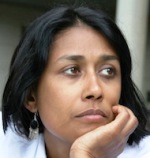 Nandini Sundar is a professor of sociology at the Delhi School of Economics. She has studied Chhattisgarh's Tribal society closely over the years and has been critical of the human rights violations in the state. It was the public interest litigation that she and others filed in the Supreme Court that led to the banning of the state-backed vigilante group, Salwa Judum. Sundar was the editor of 'Contributions to Indian Sociology' from 2007 to 2011 and serves on the boards of several journals. Her latest book is 'The Burning Forest: India’s War in Bastar' (Juggernaut, 2016)