Any talk about Dalitbahujan struggles for their rights invariably draws the remark from the dwijs that those were mainly in the nature of seeking concessions and favours. But independent India has been witness to at least one movement that proves that far from being favour-seekers, the Dalitbahujans are a fighter community. That was the Dalit Panther movement. How this movement was born, how it made the Dalits of Maharashtra conscious of their rights – all this, and much more – form the subject matter of this book by Jairam Vitthal (J.V.) Pawar, one of the two co-founders of this movement. Pawar had originally written the book in Marathi. Forward Press published the English translation under the title Dalit Panther: An Authoritative History and now has published its Hindi translation. The readers can order a copy of the book from Amazon by clicking here. 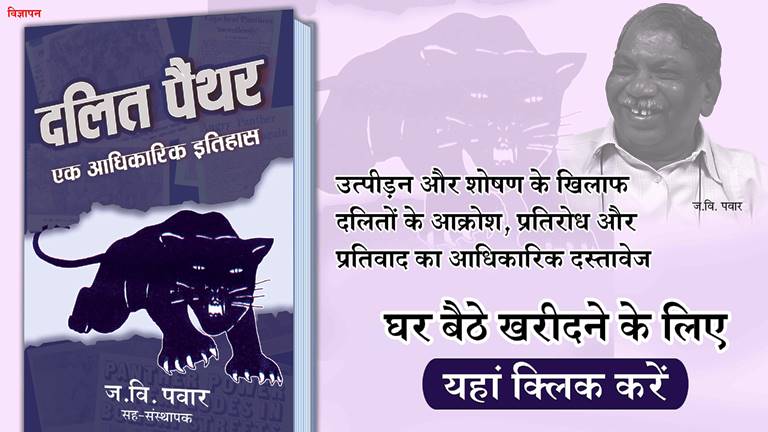 Why is this book a must-read for the Dalitbahujans? To answer this question, we need to delve into the history of the Dalit Panther movement. In his book, J.V. Pawar explains in detail how Dalit Panther burst upon the scene in 1972 in Maharashtra – one of the focal points of Dalitbahujan renaissance in India. One factor that led to the emergence of the Dalit Panther was the report of Elayaperumal committee tabled in Parliament on 10 April 1970. The report detailed incidents of atrocities against Dalits. It revealed that over a year 1,117 Dalits were murdered and that there were innumerable other cases of Dalit women raped and paraded naked. This inflamed the Dalit youth.

Two young residents of Mumbai felt an acute need for an organization that resists and opposes atrocities against the Dalits and teaches the “upper-caste” perpetrators a lesson. The two young men were J.V. Pawar and Namdeo Dhasal. Dalit youths from Maharashtra soon began swelling the ranks of this organization that was named Dalit Panther. Its units were established not only in Maharashtra but also in other states and even in London. In its short life (1972-1977), it sent out a strong signal to the entire country – and especially to Maharashtra – that the Dalit youths would no longer take atrocities against their community lying down.

How this organization impacted the contemporary society makes for an interesting reading. It was not just that the upper castes committing atrocities against the Dalits in the rural areas of Maharashtra were taught a lesson but also the central and the Maharashtra governments – which were patronizing the perpetrators of atrocities – were brought to their knees. The Dalit Panther also exposed the Dalit leaders who cared two hoots for the interests of the Dalits.

The Panthers fought for securing the economic interests of the Dalits. They ensured that Dalits got possession of their farmland illegally occupied by others. Within a very short time, the Dalit Panther became a beacon of hope for Dalits. Whenever they came to know of any atrocity or any other form of injustice against the Dalits, Dalit Panthers would show up and pursue the case till justice was done.

The Dalit Panther movement, inspired by the Black Panther of the US, has been a subject of intense interest for scholars from all over the world. There is a great curiosity in the academic world about how this organization came into being, what was the inspiration behind it, how it caught the imagination of a large number of Dalit youths in so short a time, how it functioned, what was its ideology and what kind of people formed its leadership and the rank and file, how it achieved a string of successes within a couple of years of its formation and how it came to symbolize the hopes and aspirations of the Dalits, how it forced the hands of the Central and the Maharashtra Governments and finally, how and why it disintegrated.

Factual, authoritative answers to these questions have eluded the scholars for a long time. All they used to get were speculations and conjectures, because no authoritative documentation of the history of the Dalit Panther was available. J.V. Pawar’s book fills this vacuum.

The book provides truthful and authoritative answers to all these questions for the simple reason that its author J.V. Pawar, along with Namdeo Dhasal, was the co-founder of the Dalit Panther. He not only had all the documents of the organization but also had access to documents related to the activities of Dalit Panther in government archives.