Should the identity of the backward classes have a new name?

Why are the ‘backward classes’ backward? The terms ‘backward classes’ and ‘OBC’ indicate the present situation of these castes that make up the overwhelming majority of this nation but they don’t tell the history of how this came to be. Perhaps, the word ‘Shudra’ does. The authors of the brahmanical scriptures coined this word and showed these industrious people their place in society. The word encapsulated the authors’ contempt for both these people and their way of life – industry and artisanship, both of which propel a society and a nation forward – and sanctioned their subjugation and exploitation. But would they want to be known by a name their oppressors gave them just so that they could be enslaved from generation to generation? Wouldn’t they prefer a name of their choosing – like the former Untouchables chose the word ‘Dalit’ for themselves? We invite you to participate in this discourse and send in your articles to editor@forwardpress.in Kancha Ilaiah flags off the discourse with this article:

When we were finalizing the title of my latest book The Shudras: Vision for a New Path, which I co-edited with Karthik Raja Karuppusamy for Penguin, there was a serious view that the concept “Shudra” must be avoided as it is not acceptable now. The secular intellectuals in post-colonial India completely avoided caste/varna categories in teaching and writing as if they never existed in India. In post-Mandal era, the Other Backward Classes (OBC) and Dalit categories were deployed by concerned social forces in the civil societal discourse but the secular intellectuals deployed a manipulative term “subaltern”, coined by Italian Marxist philosopher Antonio Gramsci, which made no sense to the people for whom the term was used.

One argument was that the book’s title must be “OBC”, as the Shudra category is not being used in the media and in academic discourses – unlike the term “Dalit”, which has become known globally, bringing together all former “untouchable” castes under one category.

Those among the Shudras, like Jats, Marathas, Gujjars, Patels (Patidars), who were not assigned the OBC category, were also of the view in the Nineties that they should project themselves as Kshatriya not as Shudra. When, in 2014, the Bharatiya Janata Party (BJP) came to power at the Centre with a strong theoretical foundation for promoting ancient Sanskrit text-based traditions (parampara) and varna dharma ideology in pedagogy, the paradigm completely shifted. In the Sanskritic discourse of the BJP and its parent organization, the Rashtriya Swayamsevak Sangh (RSS), the Shudras would not be visible at all. The whole ancient Sanskrit literature talks about Kshatriya kings and Brahmins saints. The Shudra producers who built the Indian economy from the days of the Harappan city civilization would have no place in the national discourse. They may just allow some discourse on Dalits but exclude all reference to the Shudra food producers and artisans. They want to drop the word Shudra from the Indian dictionary.

For any nation to prosper and advance, the role of productive communities must be foregrounded, not the leisure-centered forces like Brahmins, Kshatriyas, Vaisyas, Kayasthas and Khatris. Dalits and Adivasis are part of the productive classes along with the Shudras. If the Shudras are characterized as Backward Classes, as the Indian government designated them, their role as historical producers and nation builders cannot be brought into pedagogy and other forms of intellectual and philosophical engagements. Even today all Shudras, including Jats, Gujjars, Kurmis, Patels and Yadavs, do not have the right to priesthood in the Hindu temples, over which the RSS/BJP Dwij forces claim ownership. The secular Dwij writers describe this behaviour as Hindu majoritarianism. Take, for example, Sri Krishna, who is a Shudra (Yadav) deity, yet the Brahmins have taken over the Krishna Temple in Mathura, Uttar Pradesh, and don’t allow Yadavs to become priests. Sri Ram is the Kshatriya king-deity and Kshatriyas and Brahmins have assumed complete political ownership of the upcoming Sri Ram temple at Ayodhya. But why don’t the Yadavs stake a claim on Mathura’s Sri Krishna temple when Sri Krishna is their deity and from a cattle-herder family? Today, in Uttar Pradesh, the Jats, Yadavs, Kurmis and others have forgotten that they and a host of other castes known as the backward castes have a common history of food production, cattle herding and building agrarian technologies. All these castes are exploited by the Dwij. Now, the RSS/BJP are driving them back to their age-old position as slaves. These castes have not got English-medium education as the Dwija systematically did. There is a need for converting all government schools in North India into English medium to overthrow the Dwij hegemony in Delhi. 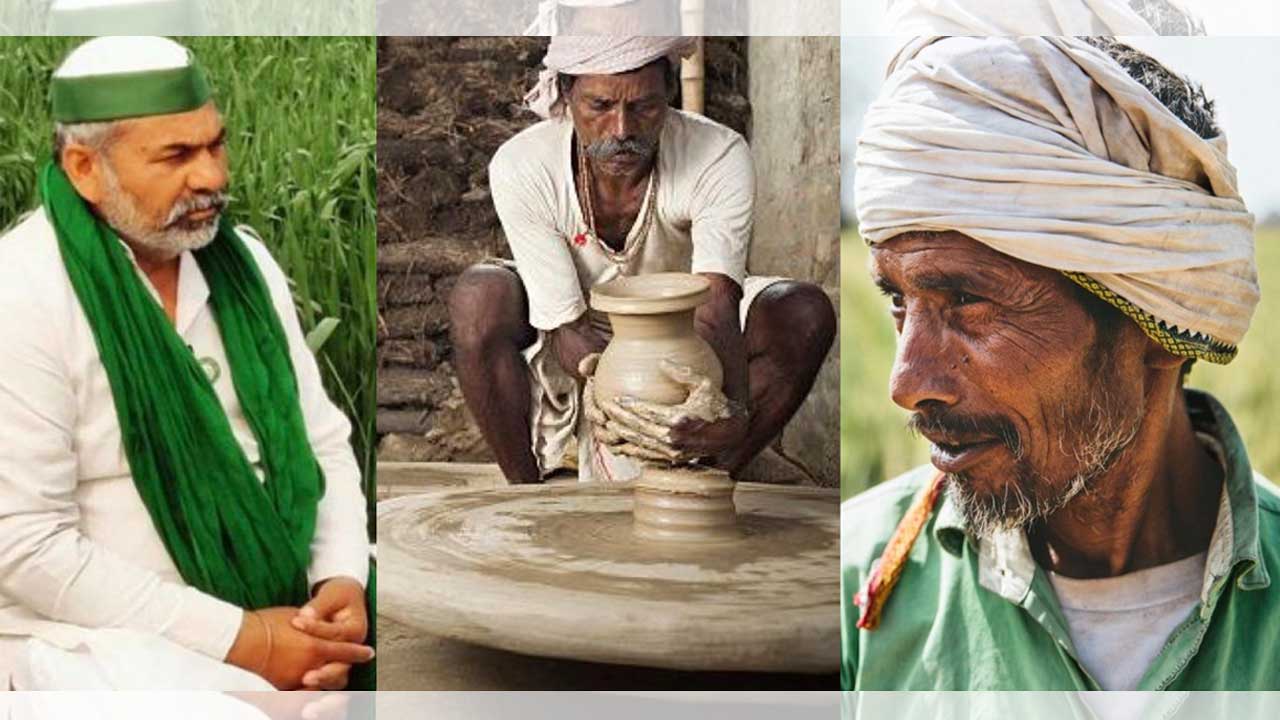 Shudra food producers and artisans need to reclaim their history, ideology and identity

The food-producer and nation-builder Shudras did not realize that their socio-spiritual status as Shudras is not equal to the other three varnas, Bania, Kshatriya and Brahmin, which make up the Dwijs. They operate as unequals – as varna/castes – in RSS/BJP-controlled spiritual, social and cultural structures, too. Mohan Bhagwat and Narendra Modi do not represent them. If the RSS did not view the Jats, Yadavs and Kurmis from Uttar Pradesh as Shudras, someone from these castes would have been allowed to become the Sarsanghchalak of the RSS. Right from its birth in 1925 the RSS has been led by Brahmins except for a Kshatriya in between. If the RSS does not function according to varna and caste, why did it not allow a Shudra to become Sarsanghchalak? If 52 per cent of the population does not have this doubt, there is something fundamentally wrong with this massive social force’s intellectual abilities.

The Shudras never studied their history. The present debate is to make them aware of their history as the real owners of this nation. That is the reason why the Shudra collective identity has to come to the fore. The Shudra battle started with Mahatma Phule’s 1873 book Gulamgiri (Slavery). Now, with The Shudras: Vision for New Path published in 2021, when the RSS/BJP Dwij are ruling the nation, the battle has to be taken into the heart of Delhi.

Some agrarian communities that are in protest against the farm laws had not realized the need for reservation during the Mandal agitation. Many of them were landowners and they thought it would be beneath their status to demand reservation in public employment and higher education.

Though the OBC category emerged as a Constitutional category, as an identifier of those castes that are “socially and economically backward”, even Banias, who are the vedic Vaishyas, managed OBC certificates and some Muslims, who are lower-caste converts but still have occupations that the Indian Muslim feudals and elite do not respect, also got OBC certificates. But they are not “Shudra” in the sense that we are using now.

Like “Hindu” is the inversion of an Alberunian (13th-century) concept used for Indus Indians to mean barbarian, the concept Shudra needs to be inverted from the Manuwadi sense of a slave to a food-producing nationalist. Thanks to the English language, the exploited forces have learnt to invert concepts like Black and Dalit. Why not Shudra now?

After the RSS/BJP came to power by setting aside a secular social civil society and State discourse and deploying Hindu society and Hindu rashtra, the idea of Shudra naturally has to come back with full force. It is a social bloc of around 52 per cent of the Indian population. If the Shudras do not fight for spiritual, social and economic equality in a fully-grown capitalist globalized India they will be pushed back to their classical slave status.

The category of OBC cannot fight an ideological battle. Nor can the battle be won by the agrarian, food-producing Shudras and Dalits with the Shashi-Tharoor-type “I am a good Hindu and you are a Communal Hindu” discourse. The RSS/BJP can simply ignore it or treat it as their sister ideology spelt out in a different language. The Shudra farmers’ struggle has exposed the RSS/BJP’s anti-Shudra/Dalit history and ideology.

Immediately after the RSS/BJP came to power in Uttar Pradesh, a strong caste-sentimental Kshatriya, Yogi Adityanath, became the chief minister and performed a cleansing ritual (shuddhikaran) in the chief minister’s official residence. This showed the status of Jats, Yadavs and Jatavs in that state, whose members – from Chaudary Charan Singh, Mulayam Singh, Mayawati to Akhilesh Yadav – have been elected chief ministers and lived there. The RSS did not condemn such a shuddhikaran. Its silence was its approval. In Rajasthan, only Vasundhara Raje, a strong Rajavamshi Kshatriya woman leader has been chief minister repeatedly. In Haryana, Manohar Lal Kattar, a Khatri, was made chief minister to keep Jats out of power. In Maharashtra, Devendra Fadnavis, a Brahmin, was made the chief minister to counter Shudra/OBC assertion. All these Dwij leaders coming to power is part of the promotion of varnadharma parampara of the RSS/BJP at the cost of the Shudra/Dalit majority communities.

When the classical Shudra society was divided into unreserved (general) and reserved categories through a governmental intervention, the upper Shudras stood with the Dwij who opposed reservations for the socially and educationally backward. Now the situation has changed. For example, the masses that are protesting against the farm laws include Jats and Gujjars (of Uttar Pradesh, Haryana, Rajasthan) who do not come under the central government’s OBC list. Most of the OBC communities that operate in the rural sector, from Yadavs and Kurmis downwards, are agriculturists and artisans. A host of artisan communities that contribute to agrarian production – like carpenters, potters, ironsmiths, fishing folk, fruit gatherers and agrarian labourers – are also Shudras.

Indian intellectual discourse must engage with all historical categories at a time when the present ruling dispensation is bringing back the classical ideas as part of its cultural nationalism package, setting aside the Nehruvian secular package. Shudra productivity and nation-building must find its place in all discourses, pedagogic or otherwise.

(An earlier version of this article first appeared in Countercurrents.org.)